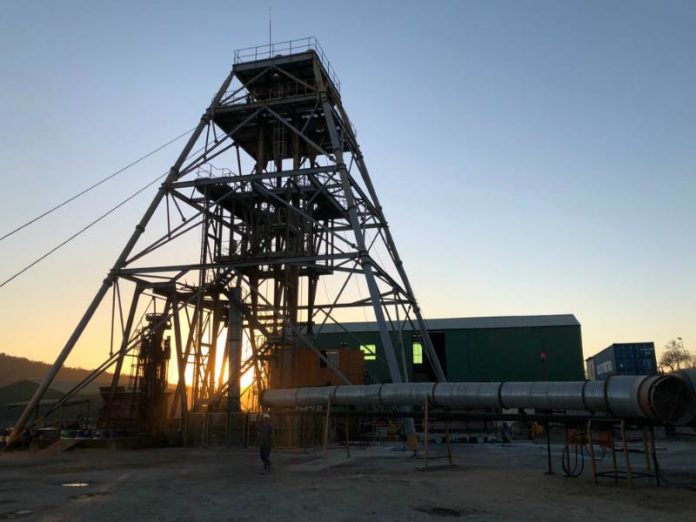 Gold producer Caledonia Mining Corporation has successfully completed the shaft sinking phase of its Central Shaft project at its 49%-owned Blanket mine in Zimbabwe.

It is well on track to increase gold production to 80 000 ozpa from 2022 and onwards following completion of the project in 2020.

The Central Shaft, at a depth of 1 208 m at shaft bottom, will now be equipped and commissioned over the next 12 months, CEO STEVE CURTIS tells CHANTELLE KOTZE.

The Central Shaft project is the largest investment in a series of investments at the Zimbabwe-based mine in a bid to increase production, improve operating efficiency and extend the life of the 113-year old mine even further. It will also deliver significant increases in the company’s profit and distributable cash, the company believes.

The Central Shaft project, as part of the company’s life of mine extension plan at Blanket, has been in progress since early 2015 and the company has spent approximately US$44 million sinking the new shaft to unlock additional resources from deep underground.

Currently in the equipping phase, prior to commissioning (expected during H2, 2020), gold production from Blanket mine is expected to progressively increase to the 80 000 ozpa of gold by increasing its production from the 50 000 oz to 53 000 oz of gold as per its 2019 production guidance.

The latest mine plan also allows for the development of a fourth production level on 38 level (1 230 m below surface) which will be accessed via a decline shaft.

The mine, although operated from the single No.4 shaft, comprises five significantly independent near vertical ore bodies.

The brainchild of COO Dana Roets, the Central Shaft – aptly named so because of its central location in relation to the five ore bodies – will enable the access of deeper ore bodies more efficiently.

“Because the current shaft is located on the extremity of the ore bodies, we only mine in one direction, but the centrality of the Central Shaft will allow us to mine more efficiently in both directions along the 3 km strike on all three levels. This will allow us to access the mining areas in approximately half the time and also reducing worker’s traveling time significantly,” Curtis explains.

Having reached shaft bottom at 1 208 m in July, the bottom and mid shaft loading stations have already been established and development work from the Central Shaft to the ore bodies is advancing well – with one of the production levels having already reached the ore body.

This development work has allowed for the simultaneous establishment of the ventilation shaft and ore raises via raisebore drilling.

“With 12 months to go from an equipping perspective, we are in a very good space to ramp up production to approximately 75 000 oz in 2021 until Blanket reaches the 80 000 ozpa target in 2022 and onwards,” says Curtis.

Reliable electricity: crucial to the sustainability of Blanket

Curtis admits that the electricity supply challenges in past 12 months have been particularly disruptive to the project, particularly during the month of July and in early August.

“This resulted in the heavy reliance on the 12 MW installed diesel generator back-up capacity at the mine – sufficient to run the entire mine at full capacity but insufficient to sustain both the mine and the Central Shaft project,” Curtis explains.

The power situation has however improved substantially in late August and September thanks largely to a timely and coordinated response from the Chamber of Mines, the Ministry of Mines, the Ministry of Energy and Power Development and the Zimbabwean Energy Regulatory Authority (ZERA) which introduced a new US Dollar-based electricity pricing structure for the mining industry to support the funding of imported electricity which is used exclusively to supply participating mining companies.

Despite the improved electricity situation in Zimbabwe’s mining industry, Blanket has purchased an additional 6 MW of diesel generator capacity, taking its diesel generation capacity up to approximately 18 MW of total installed capacity.

While cognisant of the cost and availability of diesel in Zimbabwe, Curtis says Blanket will be cautious in the way it uses this generation capacity. With generators ranging in size from 1 MW to 2.5 MW, all of which have been synchronised into the mine’s electricity usage grid, Blanket has a significant amount of flexibility in that it will be able to switch on only what is needed when it is needed.

“The additional generators are on site and are currently being installed after which Blanket’s operations will be fully protected from the risk of unstable electricity supply and will ensure future reliability in the face of a potentially difficult electricity supply situation in the southern African region in the medium to long-term,” Curtis notes.

Meanwhile, Caledonia is at an advanced stage in evaluating the installation of a solar photovoltaic power plant at Blanket, which could supply the mine’s baseload demand during peak sunlight hours.

Advanced engineering, geophysics, environment and financial evaluation work is under way on an initial 8 MW plant (to be ramped up as and when needed) and Caledonia is also well advanced in the process of applying for the relevant regulatory approvals and will shortly embark on a tender process from interested parties to build and operate the project.

“While we would like to put the project up for tender before the end of the year, the possibility of this hinges on obtaining the generating licence,” says Curtis, who is confident of its granting based on how co-operative the authorities in Zimbabwe have been throughout this process.

If able to go out to tender before year end, Caledonia could already begin the tender review process in early 2020 with the potential to deliver first solar power before the end of 2020 – which will provide an extra layer of security against the electricity risks in Zimbabwe before the project beings ramping up its production.

While the company expects to consider various funding options the tender process will also invite proposals from potential funders who may be able to offer a more cost effective funding structure, says Curtis.

In future, Caledonia anticipates that Blanket will have a blended electricity supply from grid, solar and back-up diesel generators which will deliver greater levels of operational reliability, lower operating costs and improved environmental sustainability.

While the addition of three new production levels will result in a dramatic improvement in production at Blanket, the establishment of the fourth level will further extend the operation’s life of mine.

Because the vertical, steep nature of the Blanket ore bodies makes it difficult to explore any resource extension until reaching lower depths, Curtis explains that gaining access to the first three levels will allow Caledonia to undertake more extensive exploration drilling at depth to identify where the resources are and how much there is. This will determine the timing and requirements of the fourth level, he adds.

Caledonia does not believe that it will be resource constrained in future as Blanket has a total resource endowment of almost 1.7 Moz – about 50% of which is inferred.

This resource endowment, coupled with Blanket’s historically high conversion rate from inferred resource to measured and indicated resources and ultimately into reserve, will ensure an easily extendable life of mine for the Zimbabwe-based gold mine.