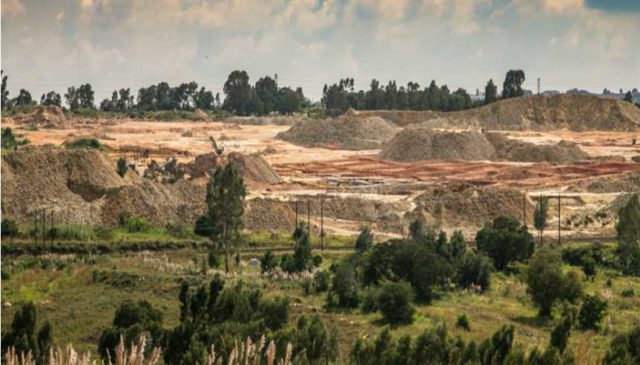 Dual-listed DRDGOLD has issued a response to a report launched by the Bench Marks Foundation, titled “Waiting to Inhale”.

As an opening remark DRDGOLD has to record its disappointment that BMF again failed to engage with DRDGOLD in the compilation of its report, even after such engagement was offered.

A second, and perhaps even more important concern, is the lack of independent, credible research in support of the allegations BMF levels against DRDGOLD’s operating footprint and the effect it has on surrounding communities.

At the outset, DRDGOLD wishes to place on record, that its aim – as a company – is to improve the quality of life of those living within its areas of influence.

This means that, in addition to investments DRDGOLD makes in social and economic capital, it seeks to preserve, protect and even improve the state of the footprint on which it operates (in many instances an inherited legacy) in order to also yield a nature dividend.

To this end, DRDGOLD has rehabilitated and vegetated dumps at a cost of hundreds of millions of Rands in the last 10 years.

This has brought about a very significant decline in dust emissions from these dumps – to the point where, this year, there were fewer than five exceedances of the regulatory thresholds, the fact that it was one of the driest years in history notwithstanding.

Another reality that DRDGOLD faces as a company and a country is urbanisation and the growth of informal settlements.

In many cases, both formal and informal settlements have encroached on land that has been designated as industrial.

The recommendation of a 2 000 m buffer between residential areas and mine dumps has largely been ignored by the authorities, as has the requirement that no dwellings may be erected closer than 500 m to a mine dump.

Today, urban developments accommodating between 300 000 and 400 000 people have encroached to within the buffer zones.

There are various points made repeatedly throughout the report and on which the BMF has made recommendations which we will address:

The suggestion is made that all mine dumps should be fenced and signposted. To be fair, at some stage, every mine dump has in fact either been fenced off/and or signposts have been clearly displayed.

The authors must be aware that any infrastructure that is potentially portable and convertible to cash, is removed, and will have to be regularly replaced.

As will be known from recent illegal mining activity, not even concrete seals of mine shafts will prevent incursions into mining areas.

Comments are made that wind-blown dust frequently exceeds limits.

Whilst DRDGOLD acknowledges that there are a number of abandoned mine dumps in and around the Johannesburg area from which dust emanates, its operations are well contained and pose no health risk and negligible public nuisance.

DRDGOLD’s 2017 figures to mid-June 2017 show further improvement to just five exceedances during the period, 0.41% of the total number of measurements. DRDGOLD will be happy to have third-party experts review and assess its reports.

DRDGOLD’s progress in reducing dust is directly attributable to the success of its systematic vegetation programme.

In six years, DRDGOLD has vegetated a total of 244 ha at the Crown Tailings Complex at a cost of R143.6 million. DRDGOLD expects to complete the programme by 2015, at a total cost of R240 million.

The comment is made that wind-blown mine dust is toxic. There is no credible research in support of this assumption.

The comment is made that there are frequent spills into the Booysens River and surface streams in Diepkloof.

This statement is factually incorrect and irresponsible. As far as DRDGOLD is concerned, a single leak occurred from one of its pipeline in the vicinity of the Russell Stream in February 2016.

The images contained in BMF’s report are of water samples taken from evaporation ponds and solution trenches.

This run-off is returned to DRDGOLD’s internal water cycle.

This has been pointed out to BMF before.

DRDGOLD therefore rejects these averments as misleading and as a disingenuous distortion of the truth.

A statement is made that DRDGOLD operates without a water use licence.

To the extent that this statement is aimed to suggest that DRDGOLD is using water without proper authority, this is simply not true. Each of the company’s operations, Crown, City, Knights and Ergo obtained and are operating in terms of either Water Usage Licenses or usage permits.

Another comment made is that communities are inadequately informed.

DRDGOLD is party to two forums – the Ergo forum in the east, the Crown forum in the west. These forums meet regularly with community representation and varying levels of community participation.

The minutes of the DRDGOLD / Riverlea Community Forum included in BMF’s report shows how extensive information-sharing, discussion and posing and answering of questions is at such meetings.

DRDGOLD gets a sense, though, that while the information sharing at the forum is extensive, further distribution of information into the greater stakeholder base is limited.

DRDGOLD is therefore investigating launching a social media platform for information-sharing into a far broader stakeholder base.

A great source of frustration for the company is the burning of vegetation which causes significant damage to infrastructure and sets back the progress made.

A welcome intervention would be for communities to assume part-responsibility to intervene when they witness attempts to sabotage DRDGOLD’s work and to also provide guidance to community members to act responsibly.

Despite the fact that BMF has chosen, again, not to engage with DRDGOLD, or to confirm its facts, or to undertake valid research, our door remains open to engage, provided such engagement is open, honest and fair.