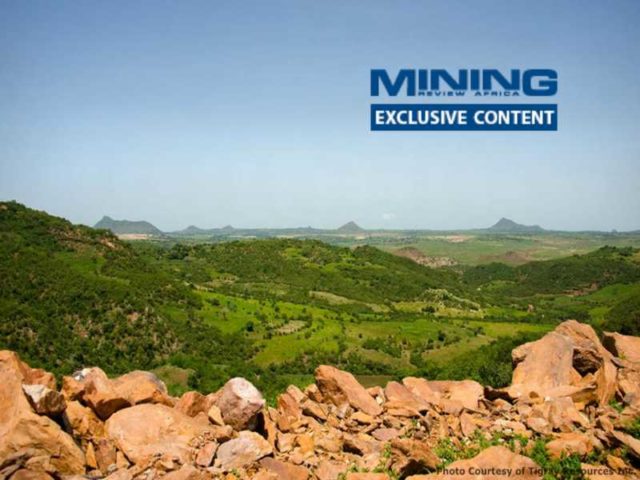 East Africa Metals (EAM) is not only focussed on developing its Ethiopian gold projects as fast as possible in order to take advantage of global gold prices, but is also helping to promote Ethiopia as a lucrative mining destination.

The company has four gold mining licences in East Africa, namely Handeni in Tanzania and Harvest and Adyabo in Ethiopia. EAM’s combined resources are of 1 636 Moz of indicated gold and 1 269 oz of inferred gold.

Currently, the company is focused on developing its Ethiopian licences that comprise combined gold resources of 915 000 oz. indicated and 977 000 oz. inferred.

In February this year, the company announced that a Phase 1 drilling programme had been initiated at Adyabo and equipment was being deployed to support the campaign.

Despite the COVID-19 pandemic, EPC work has been ongoing at Mata Bula and Da Tambuk with the assistance of EAM’s Chinese partner, Tibet Huayu Mining Company, who is fully funding the capital costs of the operations for the two projects.

Tibet Huayu has a 70% interest in EAM’s Ethiopian subsidiary, Tigray Resources while EAM still holds the mineral rights and all exploration obligations for the prospective targets.

“We signed the agreement with Tibet Huayu in December last year and work was scheduled to begin early in the year,” starts Smith.

“However, after the Chinese New Year the COVID-19 situation changed everything. Our partners then when back to Beijing with their expat staff but continued to pay their Ethiopian staff and ensured the EPC work continued. As it stands now, the work is almost completed and the intention now is move the project forward once the rainy season ends in Ethiopia.”

Smith is confident that EAM can commence operations successfully with COVID-19 restrictions in place.

“We are hopeful that once business resumes in this new normal that we will actively begin developing Mata Bula and Da Tambuk with the intention of setting up a timeline towards taking them to being production ready.”

Ethiopia may not be on the radar for many mining companies. However, it was the country’s commitment to transformation and developing it mining sector that attracted Smith to the country.

“We were operating in 2009 in Tanzania and we made a major discovery there. Meanwhile, our Chinese partner, that has an equity stake in the company, had projects in Ethiopia that were not moving forward.

“In January 2010, our partner suggested that we have a look at these projects and Harvest was the first one that we looked at.

“We discovered that there was a significant geological endowment in the region with literally no exploration ever been done.

“The fact that it was the part of the same geology that was hosting mines in Eritrea particularly impressed me.”

Putting Ethiopia on the mining map

Another thing that attracted EAM to Ethiopia was the implementation of the country’s transformation programme that was approved by the World Bank in 2010.

This resulted in securing US$75 billion for infrastructure development in this resource rich region. The aim of the programme is to increase mining’s contribution to the country’s GDP from the current 3% to 10% by 2025.

“There is strong intent from the government to focus on the resource sector and 10 years later, it has built highways and roads to the port of Sudan, a regional airport and Africa’s biggest hydropower station at the Grand Ethiopian Renaissance Dam.

“All of this was happening while we were conducting exploration in the country and this gave us the opportunity to lower the bar with respect to economic hurdles that we could expect with regards to infrastructure development, something that is a major concern in most parts of Africa,” Smith adds.

Naturally, development of EAM’s projects will contribute significantly to the country’s GDP and the socio-economic well-being of its citizens, but the company is doing even more to put Ethiopia on the mining map.

To that end, EAM was instrumental in organising the first Ethiopian International Mining Conference and Exhibition in 2017, a conference aimed at developing stronger, inclusive, sustainable growth for mining.

The conference provides opportunities to inform stakeholders of Ethiopian reforms to facilitate investment in the mining sector. It helps identify innovative financing solutions applicable to both large and small-scale mining projects and services and improve both the quality and access to data relating to Ethiopia’s geological infrastructure.

With the gold price reaching its highest levels ever, Smith believes that it will help speed up development of its gold projects.

“Initially, we had decided, along with our Chinese partners, that the two projects will be developed in series but we are now looking at developing both projects in parallel in order to bring online in a shorter timeframe so that we can take advantage of the gold price.

“Our goal is to have all our projects in both Ethiopia and Tanzania in development by 2021. Today, with four permitted development-ready projects in Africa, our future looks bright as we continue working to bring these projects into production within the next 12 to 24 months,” Smith concludes.