DRDGOLD’s golden child off to a flying start 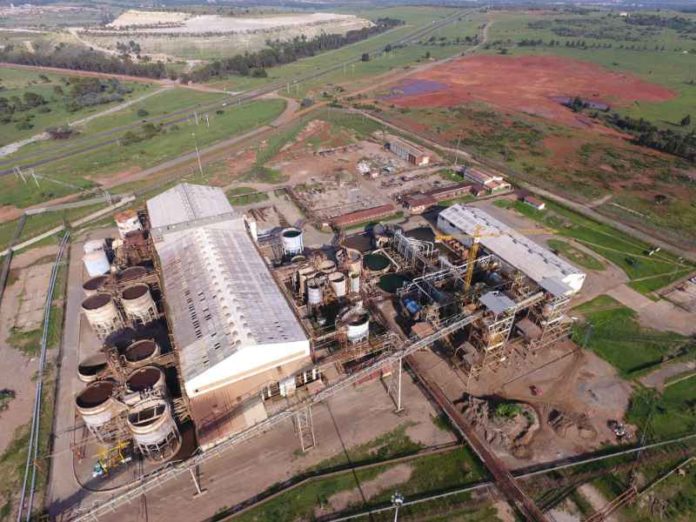 It has become cash-positive just four months after commissioning started in December 2018.

CHANTELLE KOTZE spoke to CEO NIËL PRETORIUS about how the company was able to deliver short-term value from the newly acquired asset.

“We have gone from concept to production in a very short space of time with the FWGR project well on its way to become one of the lowest cost per unit gold projects in South Africa,” says Pretorius.

He goes on to say that the company has been encouraged by the fact that both the gold content assumptions and metallurgical response of the tailings material have been correct, which enabled the company to achieve what it had set out to achieve without having to adjust its assumptions at any stage.

With a fairly large reserve of just under 3 Moz of gold for the whole project, Phase 1 will involve the mining and processing of roughly 30 Mt of material from Driefontein 5 tailings dam, with the possibility to also include 50 Mt from Driefontein 5 dam.

According to Pretorius, one of the catalysts which helped the project come together this soon was DRDGOLD’s ability to secure exclusive use of the Driefontein 4 tailings dam – the deposition facility which the company expects to use for at least the next six years.

Understanding the importance of not compromising on the safety of a tailings dam and the environmental due diligence required in the process, DRDGOLD took slightly longer than expected to prepare Driefontein 4 for deposition as the initial sidewall of the dam had to be slightly redesigned to ensure that the material was of an adequate size fraction to be deposited on the outer walls of the dam.

“We therefore spent an additional eight weeks as a precautionary measure to ensure that our initial construction layout and design was accurate and accounted for the size fraction of the material,” Pretorius notes.

The tailings dam was subsequently reviewed by Sibanye-Stillwater and was given an A rating on the due diligence and governance of its tailings dam development.

The total project capital spend for FWGR to 31 March 2019 amounted to roughly R313 million. DRDGOLD made its first investment into the project in August 2018, upon completion of the agreement with Sibanye-Stillwater in the same month. DRDGOLD then secured a R300 million revolving credit facility from Absa Bank, all but R 17 million of which was paid back by March.

Phase 2, which involves a consolidation of what remains of the Phase 1 material and the remaining material acquired as part of the deal, envisages a monthly production rate of 1.2 Mt and is planned to be enacted within 24 months after first production at Phase 1.

“As Phase 1 reaches its targeted throughput, we will begin our investigations on the best Phase 2 approach, looking at it from every conceivable angle before deciding on the final configuration,” says Pretorius.

One of the determining factors is the amount of available capital which will ultimately determine the size of the new regional tailings storage facility that will be built.

“We have a licence to build a tailings dam that is big enough to accommodate not only the tailings belonging to this project, but one that is considerably bigger than our current needs require, and that can accommodate all the surrounding tailings should the owners of these dams want to partner with us,” says Pretorius.

Moreover, the cost and size of the tailings dam will also ultimately determine how ambitious DRDGOLD could be with regards to the size of the processing plant it may build to treat the tailings.

“We don’t necessarily have to build a large, bespoke 1.2 Mtpm plant to exploit this resource in future, but could instead double the capacity of the existing plant, as an increase in the size of the current plant could be sufficiently adequate to treat the 250 Mt resource over its life of mine,” says Pretorius.

He notes that while there are a multitude of possible Phase 2 development scenarios, the more likely scenario at this stage is one in which DRDGOLD doubles the capacity of the existing processing infrastructure and builds a bespoke, albeit modular and scalable tailings storage facility to receive our existing resource – an option that will be considerably less capital intensive than initially anticipated.

The company will also soon begin a bulk sampling programme at the Kloof and Libanon tailings dams to best determine the most sustainable blend and the successful mining of all the dumps in their entirety.

Pretorius explains that being able to plan the blend correctly upfront will enable the company to mine the right mix at the right pace to ensure a consistent head grade into the plant, with the objective of processing the same head grade over the life of mine.

Plans for the future

With Sibanye-Stillwater as a major shareholder in DRDGOLD with potential to own a controlling stake in the future, Pretorius explains that the company would seek to act as somewhat of a ‘pilot fish’ picking up non-core surface assets of Sibanye-Stillwater.

In the process unlocking value which otherwise would have remained obscure within he scale of the rest of the Sibanye Stillwater portfolio, as it will be doing with the FWGR project.

These opportunities exist not only in gold but the other commodities into which Sibanye-Stillwater has expanded. Pretorius believes that should DRDGOLD be commercially successful on the FWGR project that it could become a partner of choice for its other projects.

“Our association with Sibanye-Stillwater could be the start of a very exciting period for DRDGOLD, in terms of providing us with new opportunities to create value from assets that might currently not be receiving value recognition within the larger Sibanye-Stillwater portfolio.

At this stage DRDGOLD is a dividend-paying company that provides good exposure to movements in the gold price, but the partnership with Sibanye-Stillwater may position DRDGOLD for future growth and could evolve its share into a growth stock, says Pretorius.