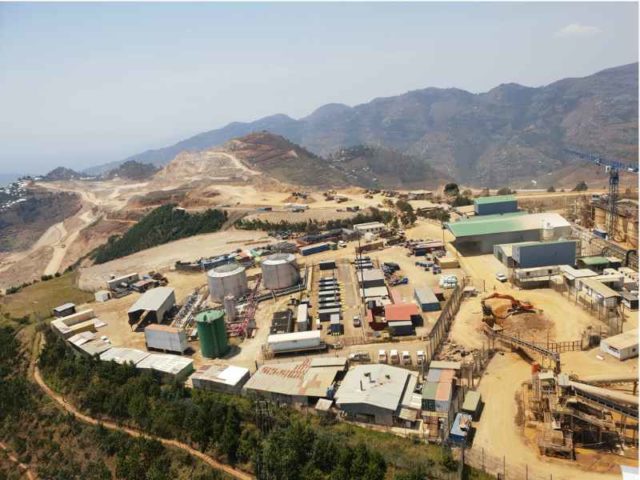 Privately-owned Canadian gold producer Banro Corporation has set in motion a plan to revive its two operating gold mines in the Democratic Republic of Congo (DRC).

It has a vision to develop and bring into production an additional two mines in the country within the next five to seven years, chairperson and CEO BRETT RICHARDS tells CHANTELLE KOTZE.

With all the makings of a major gold miner including the largest land package in Africa, a scalable mineral resource that could easily grow to 20 Moz and untapped potential, Banro has had a difficult run in the DRC since its inception in 1996.

The company had its assets seized by the government during the country’s civil war in 2001, and then rewarded its licences back in 2003 through a process of arbitration.

Subsequent to this, Banro was granted a mining convention, which afforded it various tax and other incentives to develop mines along the richly endowed 210 km long Twangiza-Namoya gold belt in the South Kivu and Maniema provinces of eastern DRC.

The company opened up its first gold mine –Twangiza – in September 2012, which was later followed by the second mine – Namoya – in January 2016.

A little over a year since entering commercial production at its second mine, while focused on overcoming operational hiccups and finding its feet as a larger two-asset company in what is a remote, undeveloped part of the DRC, Banro experienced the first, of what would later become several security incidents at both its operating mines.

From February 2017 until August 2018 its operations faced several violent attempts by local militia groups to gain entry to the mines and who cut off areas along the sole supply road to Namoya, shutting down transit of essential supplies to the mine.

These flare-ups on the ground in the DRC surrounding the mining operations led to significant cash flow problems and culminated in the suspension of production from Namoya and then Twangiza, resulting in bankruptcy and the restructuring of Banro.

Prior to joining Banro, Richards worked for a number of private equity firms focused on mining projects throughout Africa where he led greenfield/brownfield start-ups and operational and financial turnarounds and exit strategies.

The start of a new chapter

Almost a year since being appointed to the helm of Banro, Richards has spent most of his time in-country working towards remediating the security at the operations while also developing a plan to recapitalise the business with the aim of rehabilitating the Namoya and Twangiza mines.

He has also prioritised identifying potential risks to the business and has implemented actions to mitigate all current and future risks.

Richards has resultantly put together a team able to lead the company through a financial, operational and exploration redevelopment/rehabilitation phase, while also putting in place the necessary governance and security structures to ensure the safe operation of both mines.

By late 2018 Banro was in a position to restart Namoya having remediated the safety and security situation at the mine but rather chose to keep the operation on slow production (similar to care and maintenance) until in a position to recapitalise the business.

Since then, Richards has been working tirelessly on a developing a new capital plan for the business and last month he successfully arranged a US$80 million capital raise to fund the rehabilitation of both Twangiza and Namoya.

Not only aiming to reclaim its competitive edge in the DRC by restarting operations at its two mines, Richards aims to position Banro as a leading gold mining company in the DRC from a production, cost, as well as social and economic growth perspective.

He therefore also plans to use a portion of the funds raised to advance Lugushwa and Kamituga through the development pipeline to the point where a construction decision can be made.

With an imminent first drawdown of funds, Richards expects to stabilise the business by September this year and by this point would have restarted gold production at both Namoya and Twangiza.

“In order to restart operations we would need to access ore at Twangiza and start ramping up to full production (from its current slow production state) at Namoya,” Richards explains, adding that he expects to be cash flow positive by the end of 2019.

Despite its already large mineral inventory, with proven and probable mineral reserves of 3.18 Moz – 7.04 Moz of measured and indicated resources, and an additional inferred resource of 5.08 Moz, Richards suggests that Banro still has room to prove up additional resources, having only explored 38% of the total land package it has under licence.

“I believe we could comfortably demonstrate a path to achieving 1 Moz of annual gold production by proving our resource up to 20 Moz with further drilling,” he says, noting that the mineralisation is well understood, consistent and quite easy to exploit.

Lugushwa, the most advanced of the two exploration projects, consists of three exploration permits, located approximately 150 km southwest of the town of Bukavu.

Meanwhile, the transition and fresh rock portions of Lugushwa have an inferred resource of 65.01 Mt grading at 1.54 g/t gold containing 3.22 Moz of gold.

Banro will begin a significant infill-drilling programme at Lugushwa within the next few months, which will run well into 2020.

“We will then move into a feasibility study in early 2020 and be in a position to take a construction decision in mid to late 2020.

“Lugushwa has the potential to be our biggest mine yet – comfortably able to deliver +250 000 ozpa of gold over a mine life of +10 years,” says Richards.

“While we would look at establishing an initial 180 000 oz operation at Kamituga, the scale of the resource – with a mineralised strike length of over 20 km – allows us to easily scale the operation to as large as Lugushwa,” states Richards adding that Kamituga could be a complete replica of Lugushwa.

When asked how he plans bring these two projects into production, Richards explains that much like Endeavour Mining Corporation’s successful construction strategy – using a highly skilled in-house team to spearhead construction of its projects – Banro too will relocate the Lugushwa construction team to Kamituga where it will replicate the construction process, allowing 18 months for construction at each site.

With these four projects in production, Banro will be producing just shy of 1 Moz of gold a year – a feat that will help take it to mid-tier producer status.

Further growth potential beyond 1 Moz exists in unlocking the high-grade underground mining potential at both Namoya and Twangiza as well as at the five other targets along strike from Namoya, Twangiza and Kamituga, which currently require development drilling.

As the only industrialised business in eastern DRC, Richards’ believes that it is in both Banro and the DRC government’s best interest to maintain stability in the region as the restart of Namoya and Twangiza, as well as the establishment of two additional mines over the next five to seven years, could create between 2 000 and 3 000 additional jobs (and up to 30 000 indirect jobs) through economic stimulation.