South Africa – Goldplat plc, the AIM listed African gold producer, has made significant progress on capital projects and new contracts aimed at improving the production and efficiency of its gold recovery operation in South Africa, Goldplat Recovery (GPL), which processes by-products from the mining process to recover gold.

A new electric boiler has been installed and is currently being commissioned at GPL.

Although this boiler has been installed in anticipation of the installation of the first 4 t elution column acquired from DRDGold (scheduled for October 2015), the immediate effect has been the ability to improve the utilisation of the two existing 1 t elution columns and to increase throughput to 5 t of loaded carbon per day from these two columns.

This is expected to have a significant impact on the treatment of backlog material and is aligned with Goldplat’s strategy to capture more of the gold recovery value chain in-house.

The new woodchip wash plant was commissioned in mid-August 2015 and has had a positive impact allowing for an additional 2 kg of gold production per month from the existing wood chip stockpiles. Payback of the R2.5 million capital expenditure is expected to be 6 to 7 months.

GPL has entered into a contract with its third party refining partner, Rand Refinery whereby GPL will toll-process a large batch of by-product material for Rand Refinery.

This is expected to yield silver and gold for which GPL will be paid treatment and refining charges. The high grade circuit will be dedicated to processing the material under this contract for an initial two months and it will take a further four months to complete the elutions.

Material previously planned to be processed through the high grade circuit will be processed through the low grade circuit which is scheduled to be commissioned in mid-September 2015. The commissioning of the new 4 t elution column is timely in order to support this very important project which would not have been possible had Goldplat not strategically increased its elution capacity at GPL.

Where Rand Refinery has not been able to accept and process certain Goldplat material (which is now mostly being processed in-house and through Aurubis Refinery in Germany), they have now begun accepting batches of ashes again albeit in limited quantities and on an ad-hoc basis.

Gerard Kisbey-Green, CEO of Goldplat plc comments: “We are very pleased to announce the completion of certain capital projects, which we believe will have an immediate positive impact on flexibility and ultimately profitability of the operations.”

“Particularly satisfying is the fact that despite the cashflow problems experienced throughout the past 18 months, Goldplat has managed to, and continues to manage to finance strategic and essential capital projects internally.  The management and operational teams are committed to completing projects on time and within budget so as to meet financial plans going forward.”

“Regarding Rand Refinery, we are pleased that despite the challenges, the relationship between Goldplat and Rand Refinery is strong and that we continue to find mutually beneficial ways to work together.” 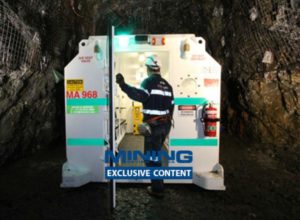