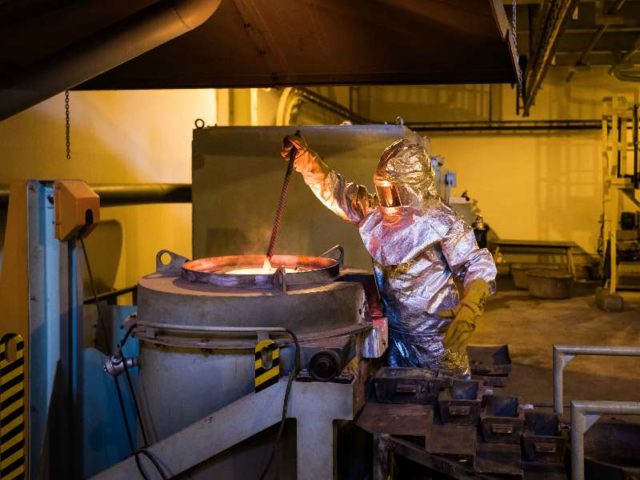 2018 was a year of varied results for AIM-listed Hummingbird Resources with the company enjoying success and also facing challenges at its Yanfolila gold mine in Mali.

However, head of business development BERT MONRO points out the company is working towards increased plant capacity and potentially extending the mine life.

Since it was formed in late 2005, Hummingbird Resources has significantly grown its global resource inventory across two West African countries, Mali and Liberia, from an initial 0.8 Moz to 6.4 Moz.

Initially, the company focused most of its resources on the Dugbe gold project in Liberia.

However, following the acquisition of Gold Fields’ Yanfolila asset in Mali in 2014, Hummingbird refocussed its attention on the high grade gold project, which consequently poured first gold in December 2017 – on schedule and within budget.

The mine’s first year of commercial production can best be described as a year of two halves.

According to Monro, 2018 kickstarted on a positive note as the mine successfully ramped up to commercial production in April.

“We produced 33 000 oz of gold at a US$790/oz all-in sustaining cost. As such, it is safe to say that the first half of the year went according to plan,” explains Monro.

During the second half of the year, Hummingbird faced a number of operational challenges that resulted in the company revising its original guidance.

Monro states that a number of the challenges were around logistical issues outside of the company’s control.

“Last year we experienced flooding in the region and this hindered access to site.

“Additionally, we had an issue with pit stability due to the heavy rainfall in the area. As such, some remediation to the pit was needed because we were still in the early stages of mining in the oxide zone,” he adds.

That said, Hummingbird successfully overcame most of its major challenges at Yanfolila to deliver at the top end of revised guidance of 87,000 – 92,000 oz.

Currently, Yanfolila’s remaining mine life is estimated at six years, however with 1.5 Moz of resources, the company is looking to significantly extend this timeframe.

As such, last year, the company drilled around 30 000 m as part of its exploration programme, with the intention to eventually convert resources into reserves.

According to Monro, Hummingbird is hoping to announce an updated reserve statement and a new life of mine plan by the end of the first half of 2019.

“Our anticipation is that we will be able to extend the life of Yanfolila significantly in the coming years,” he adds.

“It’s happened a lot of times in Mali where mines start with a seven to eight year mine life and continue producing for over 12 years.”

With regards to expanding production capacity at the plant, the company is currently installing a second ball mill at Yanfolila, which is due to become operational in the third quarter of this year.

This will increase throughput capacity by 24% when processing 100% fresh ore.

Hummingbird also contributes to the socio-economic uplift of communities in the area.

For example, more than 95% of the company’s employees are Malian. Monro adds that between Hummingbird and its suppliers and contractors, about 1,000 people have secured gainful employment.

He states that there has been a strong focus on hiring people who reside in the region. Most of these individuals are traditionally subsistence farmers as well as artisanal miners.

“Our mining contractor, Africa Mining Services, also did the same thing and had success in training a group of local people to become 777 truck drivers on their fleet.” Monro explains.

Individuals are given the training and equipment to open small businesses, such as soap-making operations and poultry farms, both of which sell their produce to the local market as well as to the mine.

In addition to such programmes, the company has invested significantly in education and healthcare.

For example, in 2017 Hummingbird built a local clinic which supports approximately 10,000 people and the company has supported the salaries of 12 teachers at local schools since acquiring the mine site in 2014.

Best of the west

Meanwhile, Monro believes that Hummingbird is making good progress at its Dugbe gold project in Liberia.

With around 4.2 Moz of resources, the Dugbe Shear Zone contains the largest gold deposit in the country.

Currently, Hummingbird is in discussion with the Liberian government to finalise its Mineral Development Agreement (MDA), which it has been working on for the past few years.

Before it is finalised, this MDA has to undergo a number of processes including ratification by both houses of parliament as well as sign-off by the president.

“Speculation in the Liberian media is that we are getting close to finalisation,” states Monro.

“We are looking forward to being granted a 25-year security of tenure. Once this happens we will be better placed to determine the strategy around Dugbe and the way forward.”

Given recent news of mergers of major gold miners on an international level, should there be cause for concern that junior miners, such as Hummingbird, will fail to attract investment?

“It’s hard to say exactly and there are two trains of thought on it,” says Monro. Firstly, I believe there should be continued consolidation in the junior space in order to reduce general and administrative costs per ounce.

“One the other hand, if more larger tracker style funds flow into the big caps, it means that smaller mining companies have the ability to attract contrarian investors.

If, obviously, more consolidation leads to a smaller number of larger companies, it will become harder for fund managers to outperform the market, hence the attraction of smaller cap companies.”