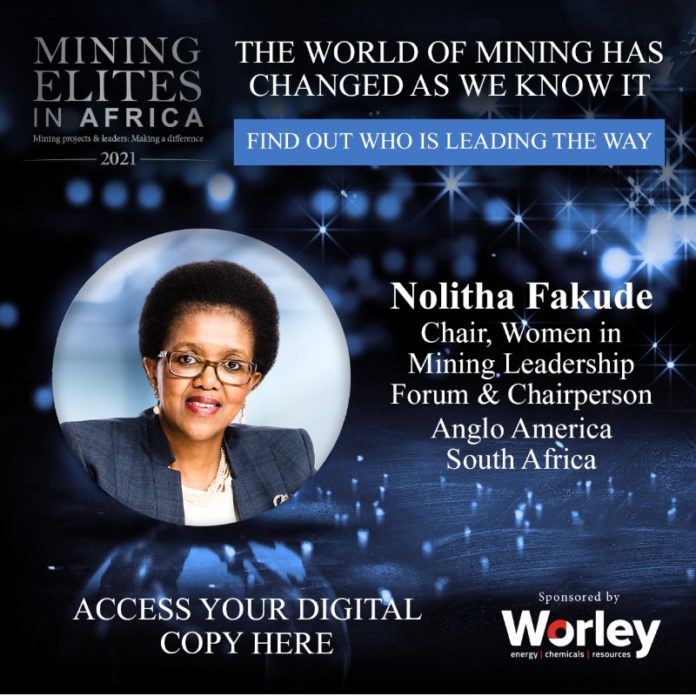 Corporate activist and inspirational business woman, Nolitha Fakude, has spent her life focusing on the development of women and marginalised communities in the workplace and society.

Before taking up the post of Director and Chairperson of Anglo-American South Africa in September 2019, Nolitha held several senior positions at a number of blue-chip companies.

“In an industry where women are still under-represented, especially in leadership roles, there are few that reach the outstanding heights achieved by Nolitha. Her career has not only shown excellence in business, it is also underpinned by moral and regulatory imperatives to advancing women in mining.” – Tom Quinn

The event highlights the Minerals Council’s focus on the implementation of initiatives designed to achieve stretch targets for the representation and advancement of women in the South African mining industry.

The stretch targets are to ensure that the mining industry at least doubles the percentage of women in mining by 2025 and ultimately works towards 30% to 40% women representation across the industry and 50% in management over the next decade.

Furthermore, Nolitha believes that the impact of COVID-19 has disproportionately affected women because their jobs are typically more precarious than men’s, and they tend to assume the greater burden of family duties.

At the same time, however, she says the pandemic has created a great opportunity for women in mining. She believes that in a post-COVID-19 environment, we will be seeing workplaces changing to accommodate greater flexibility, social distancing and increased modernisation. These present opportunities for increasing workplace diversity.

According to Nolitha, there are moral and regulatory imperatives to advancing women in mining. More importantly, she avers that no industry can continue to thrive if it only uses half of its population.

She believes that when people with different skills and abilities can come together to make a positive contribution, then it will be the best outcome for the mining industry and South Africa’s economy.

Nolitha believes the opportunities to accelerate the work of the Women in Mining Leadership Forum include the piloting of remote working models and technology; a push to implement technology with potential to benefit and attract women; and a mindset shift which offers an opportunity to challenge the status quo, including that of gender diversity.

In addition to her sterling contribution to the mining industry and the corporate world at large, Nolitha has also authored the book, Boardroom Dancing, which tells the story of her corporate life – from her childhood as a shopkeeper’s daughter in the Eastern Cape, to her very senior positions at some major leading companies.