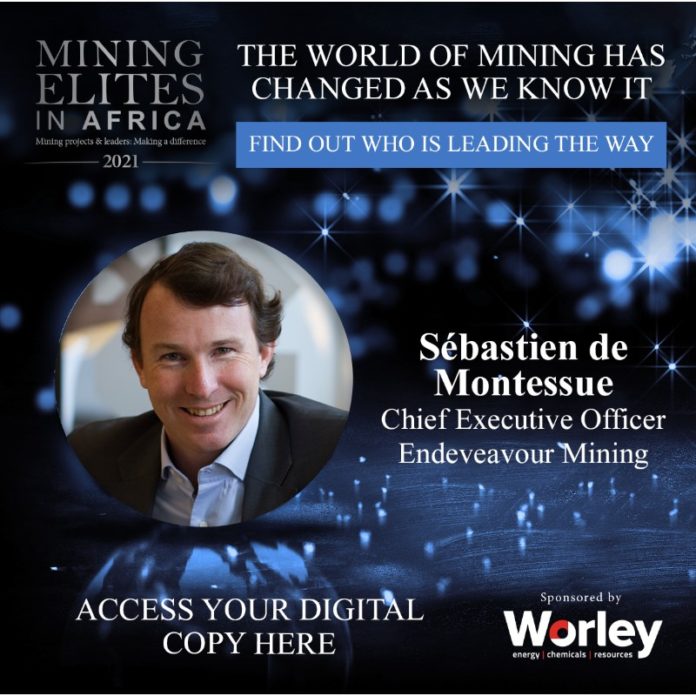 With the possible exception of Barrick Gold’s Mark Bristow, it would be hard to think of anyone who better exemplifies the dynamism of the West African gold mining scene than Sébastien de Montessus, CEO of Toronto-listed Endeavour Mining.

Since taking over the top job at Endeavour in 2016, he has pushed up the group’s gold production dramatically to the point where it is now the biggest gold miner in West Africa.

Sébastien, a graduate of ESCP-Europe Business School in Paris, was an investment banker early on in his career but moved into the engineering field in 2002 when he joined French nuclear giant AREVA, ultimately becoming Head of Mining and Group Deputy CEO.

From 2012 to 2016 he served as Chief Executive of the La Mancha Group. He moved over to Endeavour as CEO when La Mancha effectively gained control of Endeavour in a major transaction completed in 2015.

“Sébastien has invigorated the strategy, acquisitions and operations of Endeavour to become the biggest gold miner in West Africa in an astonishingly short period of time. In a year of sobering news for many companies, Endeavour has continued to surpass investor expectations.” – Tom Quinn

Building on the achievements of his predecessor, Neil Woodyer, Endeavour’s founding CEO, Sébastien has grown the company through a combination of internal growth and acquisitions.

A major landmark was the commissioning of the Houndé mine in Burkina Faso in 2017 well ahead of schedule and US$15 million under the budget of US$328 million.

This achievement was followed in 2019 by the commissioning of the Ity CIL project in Côte d’Ivoire, a US$400 million investment that has transformed Ity, previously a limited-life heap leach operation, into a major mine with at least a 10-year life ahead.

Like Houndé, the Ity CIL project was brought into production ahead of schedule and below budget, with more than 95% of construction carried out in-house.

Acquisitions during Sébastien’s tenure have included Avnel Gold in 2017, which brought the advanced Kalana project in Mali into the Endeavour stable, and SEMAFO earlier this year (2020), which has resulted in the Mana and Boungou mines in Burkina Faso becoming part of the group, which now has a diversified portfolio of six mines.

Sébastien has put in place clear strategic objectives for Endeavour, including plus 10 years of production visibility from operating assets; an AISC of less than US$850/oz across its mines; an annual production of 700 000 oz to 1 Moz; a 10-15 Moz five-year discovery target; and a Return on Capital Employed (ROCE) of plus 20%.

A hands-on management model has been adopted within the group with senior management in Abidjan in Côte d’Ivoire able to reach all the mines by air within three hours or less. The on-site GMs, who are mostly West African, are empowered and can rely on strong group support functions.

While Endeavour’s main focus for 2020 is cash flow generation, growth is in Endeavour’s DNA and new mines at Fetekro (in Côte d’Ivoire) and Kalana are a distinct possibility.

Studies are underway with the aim of publishing an updated PEA on Fetekro and a PFS on Kalana by the end of 2020. The results of these will allow Endeavour to decide which project to prioritise and advance to the feasibility stage.