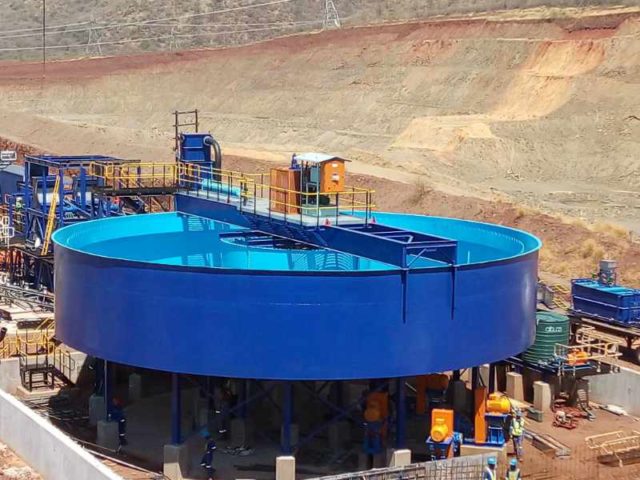 Based on the back of its most successful year to date in 2018, Hoff restructured MIP into four divisions in 2019. These are MIP Global, MIP Environmental, MIP Process Equipment and MIP Projects.

“The restructure was to give importance to the various divisions and their core business strengths, explains Hoff.

Already the new structure is bearing fruit and MIP continues to be profitable during challenging economic times both in South Africa and internationally.

Already, its order book for 2020 includes two large thickeners for two platinum suppliers in Rustenberg. Further afield, the company is supplying a thickener for a gold mine in Russia as well as equipment to a project in Scotland.

“We are working double shifts at our manufacturing facility in Johannesburg to accommodate this project alongside the large volume of work we currently have,” Hoff states.

“The latter is a huge factor when I consider where and with whom the company does business with. If I find that I am in a situation that compromises our ethics, I will walk away from the job,” he adds.

The majority of MIP’s business is derived from South Africa, with the country contributing around 70% of its overall business turnover. Given the challenges in the South African mining environment, how does Hoff continue to do well in the country?

“While there are some Greenfields projects, a lot of MIP’s business is derived from Brownfields projects,” explains Hoff.  Also, our service levels are second to none. This tabled with superior and reliable products means that we have a lot of return customers. This is an indication that we are doing something right.

“In addition, being out there and interacting with the customers allows us to see what opportunities there are and as such, we create a lot of business opportunities for ourselves. For example, we find opportunities in modernising older equipment.”

No time for standing still

Elaborating on the above, Hoff states that MIP is committed to moving with the times as mining enters the digital era.

“There’s an old adage that if you standing still, your business will die. You need to learn continuously and continuously improve.

“For example, MIP supplied a thickener and a flocculant plant to Exxaro’s Belfast coal mine – Africa’s first mine to have a digital twin. However, when we got involved with the project in 2012, the technology was different and we had to constantly stay abreast of new technology. When we eventually supplied our equipment, it incorporated the latest advancements in the market in terms of instrumentation.”

Using technology to continuously improve its products is a concept that MIP has fully embraced.  For example, Hoff explains, MIP previously used progressive cavity pumps in its flocculant plants.

“However, in the last few years it has realised that a peristaltic pump works better. Granted, they cost more but they are more reliable and easy to maintain,” says Hoff.

“We are constantly improving our products, Hoff continues. “For our thickeners, we use different instrumentation. For example, we used to use a ball on our bed levels but now we use something different that is more efficient. Also, using the latest technology, we have improved the tracking devices on our linear screens.”

Another reason why the company is so successful is that it has its own fabrication company.

“The advantage of this is that we can control cost better, we can control deliveries and do our in-house research. MIP Industries teams work closely together in order to build the best possible products,” adds Hoff.

While South Africa is a major part of MIP’s business, Hoff states that it does realise that there is potential to expand its operations on a global scale.

“Interestingly enough, we do a lot of work in southern Africa as opposed to the other parts of the continent. However, we are always looking for opportunities outside of South Africa.

“We see potential in countries such as Egypt, Ghana and other central African countries. We are also looking for opportunities outside the continent. In fact, last year we supplied equipment to Australia, North and South America.”

Finally, when Hoff decided to restructure the business last year, it was not just to ensure continued profitability of the business – he was also thinking about MIP’s long-term sustainability.

“We all get older and I will have to eventually to move on. This restructure has provided the opportunity for a younger generation to take up leadership positions within the company –part of the succession plan in order to keep the business successful in the future when I eventually hand over the reigns,” he concludes.