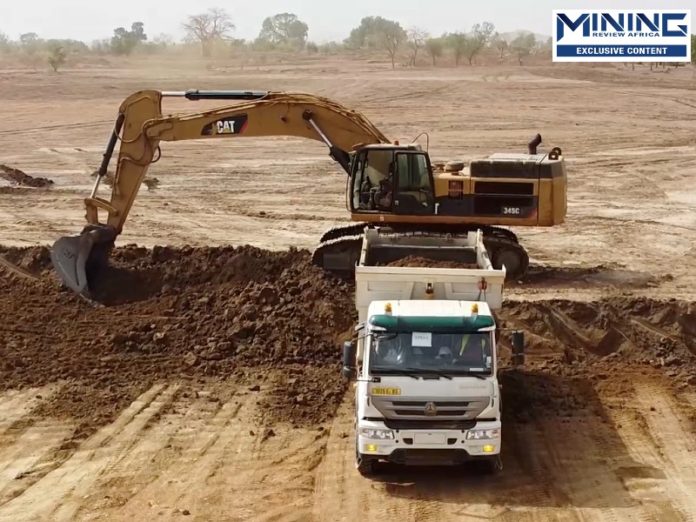 Orezone has made significant progress at Bomboré under the leadership of president, CEO and director Patrick Downey, who has over 30 years in the international resource industry and joined the company in 2017 to spearhead the development of the project.

Downey changed the direction of Bomboré’s development strategy at that point by adopting a phased development approach aimed at first mining the soft free dig oxide material and subsequently expanding the process plant to  incorporate the higher grade sulphide zones of the resource, while still allowing potential further expansions to exploit the full resource.

“Apart from requiring less upfront capital, the phased approach was also determined to be the best long-term development plan as it would support a longer, more profitable operation over the life of the mine, while also supporting further expansions of the operation,” says Downey.

This phased plan was incorporated into the company’s 2019 feasibility study which, when modelled on a base case gold price of US$1 300/oz, determined that Bomboré’s 5 Moz gold resource was capable of producing 133 800 ozpa of gold in the first 10 years (1.6 Moz in total) over a +13-year mine life at an all-in sustaining cost of $762/oz in the first 10 years with an after-tax payback period of 2.5 years.

The 2019 feasibility study incorporates Downey’s phased development approach at Bomboré, in which two independent milling circuits (one oxide and one sulphide) will be developed, with both combining to feed the common CIL and gold recovery circuits.

“The crescent-shaped Bomboré ore body comprises a number of different pits, including three main pits and several smaller pits,” says Downey, noting that on average, between six to eight different pits will be mined each year, providing the project with operational flexibility.

The Phase 1 oxide plant, at a cost of $153 million, will be developed first and will have an annual feed rate of 5.2 Mtpa of ore at an average head grade of 0.7 g/t of gold, capable of delivering higher-grade ore in the early years of the project, and stockpiling lower-grade material for later years. The first 2.5 years of production will all be from free-dig oxide ore.

The oxide plant development will be funded through Orezone’s $182 million project financing package which it concluded in January this year.

Thereafter, construction of the 2.2 Mtpa Phase 2 sulphide expansion circuit, at a cost of $63.2 million and funded through cashflow, will begin in year two of the oxide operations and be commissioned in year three, at which point the throughput of the oxide circuit will be correspondingly reduced to 3 Mtpa to maintain the combined capacity at 5.2 Mtpa. The sulphide circuit has potential to be expanded an additional 1.8 Mtpa for a total sulphide capacity of 4 Mtpa.

The oxide plant has been designed to process the soft, free digging, fine-grained ore which eliminated the need for a crushing plant ahead of the grinding circuit. The ore is direct loaded across a static grizzly onto a large hopper and then a variable speed apron feeder. From the apron feeder, the ore is transferred to a mineral sizer to break up any sticky lumpy ore and then transferred to a conveyor that feeds directly to a ball mill, which will be equipped with a variable speed drive sized to accommodate a wide range of ore types and hardness.

The ball mill discharge will then be pumped to a cyclone cluster with the oversize reporting back to the mill and the undersize fed to a pre-leach tank and seven-stage carbon-in-leach (CIL) circuit. The CIL tails then pumped to a lined, zero discharge tailings facility. Gold will be recovered in a standard 10 t carbon desorption plant, followed by electrowinning and smelting to produce gold doré bars.

“Only after leaching will the sulphide material combine with the oxide material in the existing CIL circuit for final leaching and gold recovery,” explains Downey.

Engineering on track and progressing well

Having appointed its engineering, procurement and construction management contractor, Lycopodium Minerals, in January and its open pit mining contractor, Sila Equipement, an established Burkinabé company in February, Downey says that Orezone has managed to make significant progress on site during the first half of 2021, where engineering is about 30% complete.

According to Downey, the engineering and procurement activities for the process plant, the tailings storage facility and water management systems have already begun and are progressing well. This includes the ball mill (a critical long lead item) as well as several other major items of equipment including the apron feeder, CIL inter-tank screens, and CIL agitators.

Orders have also been placed for most of the mechanical and electrical equipment as well as the bulk materials, including concrete reinforcing bar and embeds, CIL tank platework, structural steel and platework, HDPE liner, and overland piping have also been ordered with costs also trending within budget. “The contract for the CIL tank and overland piping will be awarded imminently, while the structural and mechanical piping contract will be awarded at the end of July,” says Downey.

Downey explains that earthworks for the plant site area and tailings storage facility have begun and are rapidly advancing, ahead of the first concrete pour, scheduled for mid-July.

The P17S deposit, located at the southern tip of the ore body has been subject to an ongoing drilling programme to test its expansion potential. Drilling to date has returned thick, near surface  intercepts which are currently outside of the resources and reserves at Bomboré.

“With similar previous results at P17, we now have over 1.7 km of strike extent with multiple high-grade stacked zones and a very exciting target to expand these high-grade reserves and resources,” says Downey.

Downey says that Orezone plans to continue to drill in the areas around P17S, P17 and P16 – a large exploration corridor – with good sulphide reserve grades of over 2 g/t.