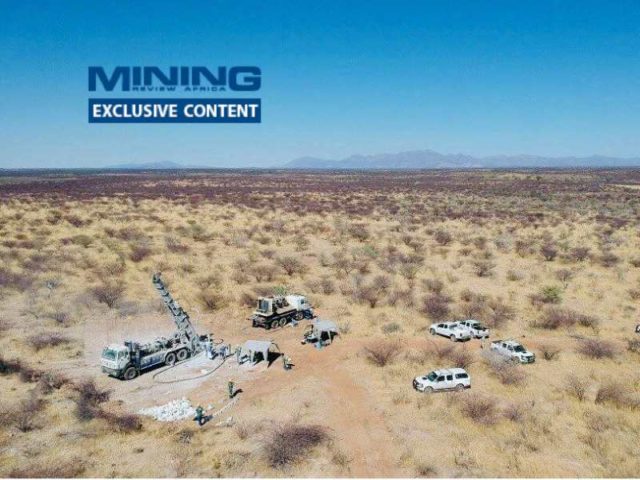 TSX-listed Osino Resources had one vision when it was founded: To find Namibia’s next significant gold deposit.

Now that it has achieved this objective, the company is now focused on advancing its Twin Hills discovery which is part of the company’s larger Karibib gold project. GERARD PETER finds out more from CEO HEYE DAUN.

Daun is the founder of Auryx Gold Corp. which was formed in 2010 after he, along with a few Canadian colleagues, acquired the well-known Otjikoto gold project in Namibia.

“Otjikoto was considered marginal and problematic and not very interesting at the time. But being a mining engineer and having built and operated gold mines before, I recognised its opportunity,” he starts.

Read more about mining in Namibia

“We raised money in Canada, drilled out the project and conducted a feasibility study. Having defined it and validated its viability, it was then acquired by B2Gold. Subsequently, B2Gold built a highly successful gold mine which is now one of Namibia’s most profitable mines.”

Daun weighed in on the success and started to explore the opportunity to discover more lucrative gold projects in the country. In 2015, when very little attention was being given to Namibia, he formed Osino Resources to explore further opportunities.

“We always had a vision to find the next significant gold deposit in the country. And so, we then brought in quality financiers like Ross Beaty and RCF and with that money and determination, we executed a large-scale, systematic exploration programme, which resulted in the discovery at Twin Hills. Now that we’ve made the discovery, we are fast tracking it to get it to the project stage,” Daun adds.

The Twin Hills discovery forms part of Osino’s Karibib gold project, which is made up of 12 contiguous licenses to the north-east of Karibib town. Currently, it is in the advanced exploration stage.

The company is currently drilling defining a maiden resource at Twin Hills Central and is planning a rapid follow-on Preliminary Economic Assessment, both of which are expected to be completed during the first half of 2021.

Osino is thus on a fast track from being an exploration company to becoming a junior developer. Daun states that the project still has substantial exploration upside which will be tested with ongoing, intensive drilling over the next 6 months.

Earlier this year, Osino Resources embarked on Phase 2 of its exploration at Twin Hills Central which comprised an aggressive, 8-rig reverse circulation and diamond drill program which is still ongoing.

The objective of the second phase was to further define the Twin Hills discovery and drill test some of the other newly defined gold prospects within its cluster.

The programme entailed approximately 40,000 m of in-fill and step-out drilling aimed at expanding the mineralised horizon along strike and down dip and testing some of the other targets.

This drilling was generally done on 50 by 50 m spacing, with an average hole depth of 200 m. But going down to 400 m in places and should result in a code-compliant maiden inferred resource statement by the end of Q1 2021.

“Namibia took a similar approach to South Africa but was less draconian. So, we were mainly affected by the international travel restrictions. Mining was regarded as an essential service so we were able to continue operations.

“Essentially, we had a two-month lockdown where we stopped all operations in March or April. And then in May, were able to start drilling again. Luckily, we have an all Namibian team and are well financed.

“As such, we were able to drill almost continuously, which means that we have progressed the projects substantially and we have thus had a great year, despite Covid-19.”

With gold prices reaching its highest level, Daun admits that interest in the precious metal has necessitated the need to speed up operations.

“At the beginning of the year, we announced a drilling programme of 20 000 m. We’re going to double that and in fact, we will be drilling about 45 000 m this year. We started off with three rigs and now have got eight on the property. And we will just continue like that.”

Furthermore, at the same time, Osino Resources has been very proactive and has enlisted Cape Town based Lycopodium, who are a respected Australian study specialist and mine builder, to assist Osino in completing a preliminary economic assessment on Twin Hills during, which Osino expects to report on in Q2, 2021.

While Twin Hills holds much promise, Osino Resources is certainly not putting its eggs in one basket when it comes to exploration in the country.

“We have an integrated exploration programme across our licenses with a range of discoveries, prospects, and targets. And we are developing all of those at the same time.

“Clearly, the focus is on the more advanced projects so that’s where most of our spending and attention is currently going. But we are doing Brownfields and Greenfields exploration on the other licenses.

“In fact, we’ve been having some good success and I think there’s a there’s a good chance we might make additional discoveries elsewhere in Namibia,” he concludes.