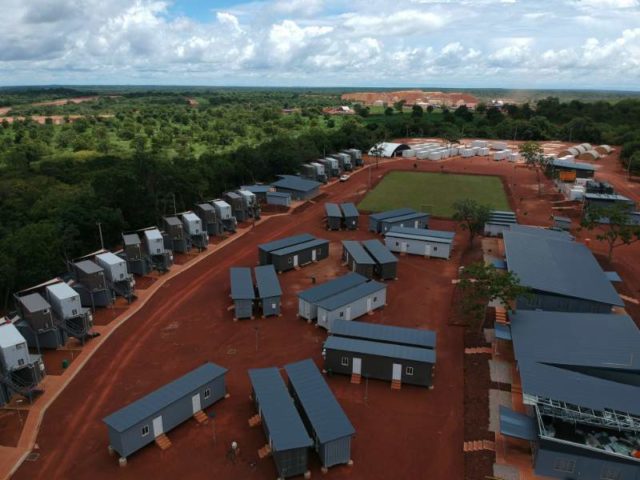 Perseus Mining is in a financially strong position to develop its third gold mine. Situated in Côte d’Ivoire, Yaouré will deliver large gold volumes in excess of 200 000 ozpa.

With the potential to transition easily from open pit to underground in the not-too-distant future, the mine will also hold the company’s flagship operation status, MD and CEO JEFF QUARTERMAINE tells LAURA CORNISH.

Regardless of the quality of an asset, its value will never materialise without the cash to support its development. Many juniors find themselves unable to realise that value because they do not have the financial means to fund the execution of their projects.

Fortunately, Perseus Mining (Perseus) does not find itself in this position. The introduction of a new mine plan at its Ghana-based Edikan operation (mining contractors reduced from two to one) and the stable performance of its second mine Sissingué, also in Côte d’Ivoire, has ensured that the company is in a financially strong position to fund the construction of Yaouré.

This is exciting news for Quartermaine who has for years remained committed to delivering value for the company’s shareholders on the back of gold production from multiple assets in multiple jurisdictions delivering a combined production of 500 000 ozpa of gold – importantly, with all-in-site-costs (AISC) below US$800/oz. As Yaouré approaches construction start-up, this once long-term goal is moving into sight.

“We have progressively been putting the financial blocks in place to move Yaouré forward. Today, we are in ‘very good shape’ – operationally and financially – to take this project into construction,” Quartermaine states.

Reviewing the March quarter, Quartermaine outlines Perseus’s key financial attributes that demonstrate the company’s ability to move forward with its construction plans for Mine #3:

“This set of results clearly demonstrates that our costs are reducing and our operations performing as designed,” Quartermaine highlights.

An offer by a banking syndicate comprising three international banks, namely Macquarie Bank from Australia, Nedbank (Corporate and Investment Bank) from South Africa and Société Générale of France have committed to provide Perseus with a revolving cash advance facility of $150 million to partially fund the development of Yaouré.

At a total cost of $265 million to develop the project through to production, the remaining cash will be sourced through debt, $81 million of existing cash and  bullion, together with material future cash inflows from operations and proceeds from the exercise or underwriting of Perseus warrants.

With firm costing already achieved on the capital equipment required for the project, representing 50% of the estimated capital cost, Quartermaine expects no cost over-runs  on the project as it moves through the construction phase.

The engineering and supply contractor, Lycopodium, together with Perseus’s in-house construction team stand ready and will soon begin development activities as the exploitation permit has been granted by the government.

“Assuming there are no delays in this regard, Yaouré remains on track to pour first gold in December 2020. We are using the same build team that not only successfully delivered Sissingué but have built many of the new gold plants in West Africa, giving us the greatest confidence to execute and deliver this project according to our commitments.”

A closer look at Yaouré

With a known 1.5 Moz reserve and 2 Moz delineated resource, Perseus has opted to build a 3.3 Mtpa process plant which will produce 215 000 ozpa of gold at around $734/oz (over the next five years) from two open pits.

“At these volumes, the mine will undeniably be our flagship and centrepiece of our business for years to come,” Quartermaine confirms.

Based on a $1 250/oz gold price, Yaouré will generates a 27% real rate of return and a short 32-month payback period.

Importantly, the company has a strong relationship with its neighbouring community who eagerly anticipate employment opportunities as well as improvements in education and healthcare.

It is anticipated that the project will require around 1 200 people during the construction phase and between 300 and 400 people, excluding contractors, in full time employment to operate the mine thereafter.

“We also could not have picked a better location,” Quartermaine emphasises. Yaouré is in fact a Brownfield site – its oxide material has been mined by two previous owners. It is situated near a large fresh water dam and hydropower station which will supply the operation’s electricity requirements.

Thanks to the nearby six-lane highway running into the capital city Yamoussoukro, logistics poses no difficulty either. The capital also houses a well-established school of mines, so access to local skills offers additional benefits.

Although Yaouré currently only has an eight-and-a-half-year lifespan, Quartermaine believes this period will only be first phase of operation at the mine.

“Very little work has been undertaken to explore the resource beyond our current known reserves and resources.” Having invested some time and energy into resource drilling on the property, Perseus has uncovered significant potential outside of the area and will use some of the cash money from the exercise of warrants to explore around the existing project area.

The really exciting potential however lies underground. A large portion of the reserve in the main pit extends through the footwall. This reef averages 5 m in thickness and 5 – 6 g/t. A follow-up preliminary study has since confirmed a 600 000 oz resource at 6 g/t of gold which can be mined profitably using the room and pillar mining method.

“We now know that the reef extends some 1.6 km on strike but we have yet to determine the depth extension. We will consequently look to determine the size of this underground resource and how best to introduce it into the life of mine plan for Yaouré.

“This means we will not only potentially be able to extend the mine’s lifespan but will also likely be able to continue producing in excess of 200 000 ozpa at a low cost beyond the first five years,” Quartermaine confirms.

Because this represents what will likely be Côte d’Ivoire’s first underground mine, Perseus will work closely with the government and introduce them to experts who have put underground mining regulations in place to help establish an underground regime.

On the back of strong quarter, a set of very positive results and a strong balance sheet, Quartermaine is looking forward to delivering on the next phase of the company’s growth objectives – bringing Yaouré on stream and then looking to maintain its 500 000 ozpa gold production output by evaluating potential at its existing operations or expanding its mine portfolio further.