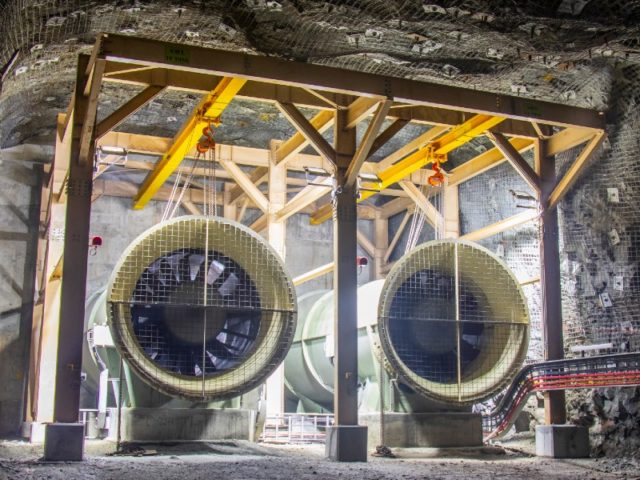 Despite the challenges presented in 2020, TLT-Turbo Africa continues to redefine ventilation for mining operations across the continent. Their customised and pro-active approach to ventilation solutions, combined with their new range of Auxiliary and Booster fans, have provided substantial electrical cost-savings to a major global gold and platinum producer, just 3 months after installing a customised pair of TLT-Turbo Africa’s fans at one of their South African sites.

TLT-Turbo Africa was approached by an ultra-deep mining operation located in Gauteng, requiring a recommendation for a suitable fan solution to be installed in a section of their mine.

TLT-Turbo Africa’s solution was purpose-designed to meet the requirements of the mining operation. At the time, the operation was using multiple installations of auxiliary fans to deliver the required volume and pressure (these auxiliary fans were consuming ±630kwe). The mine was also operating three main surface fans, each consuming ±2MW of power.

“The client’s main objective was to ensure that a sufficient volume of ventilating air was provided to the underground operations while reducing power consumption,” explains Madlopha. “To meet their needs, TLT-Turbo Africa was required to supply two fans, each capable of moving 71 m³/sec of ventilating air at a pressure loss of 3000Pa.” These requirements fall comfortably within the design ranges of TLT-Turbo Africa’s A&B fan offerings.

Based on an assessment of the mine’s needs, the final recommendation made by TLT-Turbo Africa was for two MC1600AP-160KW dual stage fans from the newly launched A&B fan range (specifically 1600mm diameter, dual-stage fans, each fan driven by two 160kW high-efficiency motors).

However, there was another challenge that TLT-Turbo’s team was required to resolve; the selected fans (as per standard, off-the-shelf design) would be too large, to pass freely through the shaft and horizontal infrastructure, in order to reach their installation site. Madlopha says to overcome this obstacle; TLT-Turbo Africa’s R&D team custom-designed the required fans to be modular, this allowed transport of the fan components through the shafts and access tunnels of the mine, once on site, the fans were easily assembled.

According to Madlopha, “TLT-Turbo Africa offered the mine a solution well suited to the tough underground mining environment. This solution would ensure a reliable supply of ventilation within the section of the mine in which the fans were to be installed.

Three months after the installation and commissioning of the supplied fans, feedback from the mine echoed Madlopha’s confidence in the TLT-Turbo Africa product. Conditions underground at the shaft have improved noticeably, particularly in the previously warmer upper-levels. Positive comments regarding these improved ventilation conditions has been received from all levels of the workforce. Measurement of the delivered performance of the installed fans, indicated that the fans were performing exactly as had been specified (both in respect to volume of ventilating air moved and in power consumed).

The installation and commissioning of the TLT-Turbo Africa fans described above, has allowed the mine to permanently stop and remove 14 other auxiliary fans (with a total rated power of 630kW). In addition, the mine has also been able to permanently stop one of the main surface fans, resulting in a direct energy saving of +2MW of power, providing an annual electrical cost-saving of ±R14m. The capital pay-back period on this project has been less than 3 months. With the lifespan of this project exceeding 10 years, the implied electrical cost savings of this solution are massive.

According to Madlopha, the success of their ventilation equipment at this mine can be attributed to the innovative design of their A&B fan range, and to the ability of TLT-Turbo’s experts to customise these fans even further to meet client and site-specific requirements. “The system supplied was customised and optimised for that particular operation. The design point, layout and robust structure provided an overall fan system which is not only efficient, but also reliable”.

The performance and energy efficiency of TLT-Turbo’s A&B range is capturing attention on a global scale. TLT-Turbo Africa has provided similar solutions to various companies in Sub Saharan Africa, and also recently, the USA. “Our high efficiency A&B fan range is truly a global leader in mine ventilation equipment. It is a well-known fact that if equipment performs well under South African hard rock mining conditions, then it is up to the test in other mining markets around the world. This has led us to a strategy for internationalisation of this product range,” Madlopha enthuses.

In conclusion, Madlopha states that the key to the success of any mining ventilation project such as this installation, is their unwavering commitment to redefining ventilation. The A&B fan range was designed based on client input with the objective of meeting ventilation requirements and reducing operational costs. The A&B fan range solutions are designed to replace the traditional, large primary ventilation fans with a simple, “plug and play”, modular design, using the same fans which are also designed to be used underground. This concept allows a mine to keep standardised spares, therefore improving reliability and availability of the fans.

“With our high efficiency fans, mines have seen a significant reduction in operational costs, where they were able to switch off a large number of standard auxiliary fans, and replace them with our A&B fans”.

TLT-Turbo GmbH builds radial and axial flow fans for virtually any application. First-rate engineering, tradition and progress in air handling technology and a worldwide support network have been the cornerstones of their excellent global renown as a fan and systems manufacturer for more than 140 years. TLT-Turbo GmbH fans and the associated system components are deployed successfully all over the globe. To date over 10,000 fans have already been installed. Their subsidiaries, branches and agencies span the globe including TLT-Turbo offices in Germany, China, Austria, Russia, South Korea, USA, Chile, Hungary, Australia, India and South Africa.