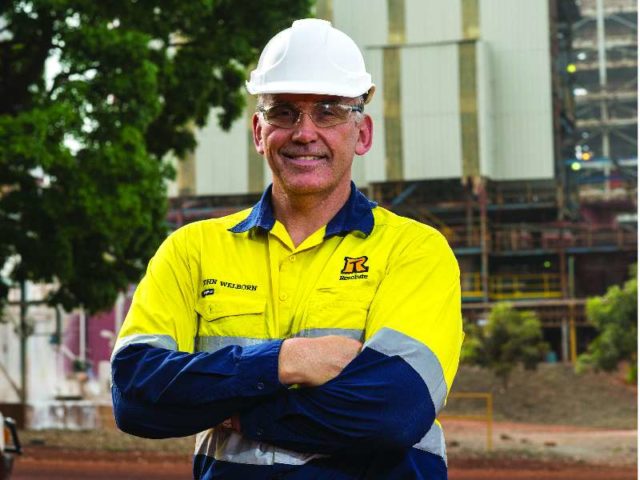 ASX / LSE-listed West African gold miner Resolute Mining’s operational and growth objectives might be described by some as overly ambitious for any junior – except this one.

The company is quickly converting its ambitions into reality, starting with the delivery of the most sophisticated and advanced underground gold mine in Africa which will become the foundation upon which to build a +500 000 ozpa modern and technologically driven gold mining business in Africa, CEO JOHN WELBORN tells LAURA CORNISH.

The Australia mining industry has over recent years come to be known for over promising and under delivering. This however is not the case for Resolute Mining.

The company’s ambitions may be high but in this particular instance have become an enabler in allowing it to achieve its goals and furthermore provide confidence to its stakeholders that it will continue to do so.

“We want to own between four and six long-life, low cost, modern and technologically advanced mines delivering a combined production of more than 500 000 ozpa,” says Welborn.

Obviously, the company’s Syama underground mine represents the foundation blocks to achieving this. And while the successful delivery of the world’s first fully automated mine is and remains the company’s core focus, building a bigger mine portfolio has not taken a back seat.

At the end of July Resolute Mining confirmed the acquisition of Toro Gold – giving it access to the 160 000 ozpa Mako gold mine in Senegal.

The deal also gave it access to a new joint venture partnership with ASX-listed Predictive Discovery – exposing it to to an advanced suite of exploration gold projects in Côte d’Ivoire.

With an extensive organic portfolio via its investments in publicly listed companies which own gold exploration assets in Africa, Resolute Mining is eager to use its “good mine building” skills set to grow its business.

Syama for example is a reflection of the company’s underground technical achievements demonstrated in pioneering the sub-level shrinkage mining method at the Mount Wright underground mine in Ravenswood, Queensland.

Situated in southern Mali, the Syama mine has since its discovery and construction in the late 1980s successfully delivered millions of gold ounces for BHP Billiton and subsequent owner Randgold Resources (now Barrick Gold Corporation).

When Welborn joined the company four years ago, he immediately recognised the operation’s potential not only to transition below surface but to do so incorporating a suite of technologies that would ensure a high production, low cost operation that could be run using an upskilled Malian team, supported by a cleaner energy, solar-hybrid electricity source.

Resolute Mining hits 80% of nameplate mine capacity at Syama

Underground development commenced in late 2016, leading to the commencement of sublevel caving in December 2018 and a quick ramp up thereafter to reaching in excess of 80% of its design capacity in July 2019 – an impressive timeframe considering this is the first time a company has delivered a fully automated mine in Africa.

Full production capacity and full automation is expected by the end of 2019.

This represents the initial delivery of one of the main benefits of automation, the ability to maintain production over periods when operations would normally cease in a typical manual mine.

The fibre optic backbone and mine-wide wireless network is complete from the portal down to the 1 055 haulage level and is connected to the surface control room. This network enables the operation of the automated fleet with operators monitoring and controling mine production in real time.

The next phase of automation work will see the commissioning of the 1 055 haulage level with automated loaders and haulage trucks working together to load and then truck directly to the surface ROM pad.

With the fans, pump stations, control room and communications network complete, the automation project is being progressively handed over to the operations team which is now at normal operational manning levels.

And while the underground mine will feed Syama’s 2.4 Mtpa sulphide plant – capable of producing up to 230 000 ozpa of gold, it has continued to feed its 1.5 Mtpa oxide plant from a series of open pit satellite ore bodies, including Tabakoroni.

“The long-term future for the entire Syama operation lies in underground mining, supported by the discovery of a new 1 Moz, 5 g/t resource beneath the Tabakoroni pit.

“With a preliminary economic assessment already underway to consider this ore body more closely, I am confident that in time Syama will comprise two underground mines feeding processing facilities with a combined 4 – 5 Mpta capacity to produce over 300 000 ozpa – up from our current 270 000 ozpa output expected in 2019,” Welborn highlights.

World-class infrastructure to support a world-class mine

Welborn reveals that Resolute will make an investment decision by the end of Q3 on building an off-grid solar power station, as part of a hybrid solution (heavy-fuel oil), to provide at least half of the mine’s 30 – 40 MW requirements. Battery storage technologies will also be considered to optimally enhance power usage.

“The addition of a modern power plant source will replace our inefficient and old diesel-fired generators and in turn reduce our operating costs significant,” Welborn notes.

Should the decision be taken to proceed with the implementation of the solar plant, Resolute would aim to feed power to Syama by the end of 2020.

Resolute Mining’s growth potential is not only substantial but already in play. In addition to organic and joint venture partnership opportunities within its current stable, its new Mako mine has elevated its production substantially – overnight.

Organically, the company is looking at further exploiting the Syama gold belt and spends around $15 million a year in exploration-associated activities. It is also aiming to make an investment decision on reopening its Ghana-based Bibiani mine which it took ownership of in 2014.

Since then Resolute has completed two surface and underground resource drilling programmes (revealing around 2.4 Moz of gold at 3.6 g/t) to re-assess the underground mine potential.

This work will be completed in the September 2019 quarter and will inform a final investment decision on the recommencement of operations.

“With the primary focus on pushing Syama to reach its nameplate capacity, it would be a natural progression to move the team to Bibiani to fulfil our vision to tap into and open up the mine’s underground ore body as well,” Welborn notes.

Acquisitively, the company has gained access to a producing gold mine thanks to its $274 million acquisition of Toro Gold in August this year. Toro Gold’s flagship asset is the low-cost, high-margin Mako gold mine in Senegal. In 2018, the mine produced 156 926 oz of gold at an AISC of $655/oz.

The addition of Mako expands Resolute’s existing portfolio which also includes the Ravenswood gold mine in Australia, and has seen the company already revise its FY19 (31 December) production and cost guidance to 400 000 oz of gold – taking it extremely close to its 500 000 ozpa production target. (The company’s annualised FY,2019 guidance is 490 000 oz).

Through its joint venture partnerships, the company has interests in and access to a wide array for emerging gold projects across the entire West African region.

This most recently includes greater exposure in Côte d’Ivoire where the company took up the role of joint venture partner with Predictive Discovery for its key Ferkessedougou North, Boundiali and Kokoumbo exploration projects.

Beyond this, it has corporate equity level investments in juniors with projects which extend from Sudan, Mali and Burkina Faso to the Democratic Republic of Congo.