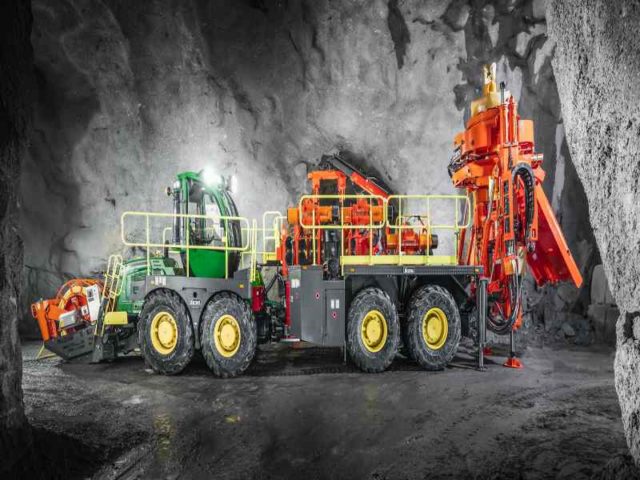 Optimising production efficiency has become a primary objective for the mining industry. The solution lies in the utilisation of modern technology and equipment that has been designed to overcome the challenges experienced in typical mining methodologies.

Mechanised raise boring has become a relatively common slot opening methodology – generally used when an existing mine develops further or expands – and typically for the large-scale development of ventilation shafts, ore passes, etc.

The technique offers various benefits such as speed and accuracy by comparison with conventional mining methods but is nonetheless still a long and complex process.

Raiseblasting is not considered by most an effective drilling technique during production, generally because its lack of mobility, set up times and the requirement to drill relatively short lengths cannot be justified in terms of time and cost.

Mechanised raise drilling should however be considered a viable drilling application for raise boring in massive mine applications. Slot raises refer to relief holes within a stope, intended to provide void space (or burn-cuts) for blasting, thereby allow ‘expansion’ of the blasted rock and to improve fragmentation.

The benefits of larger diameter slots are well documented – but if only these slot holes could be produced simply and cost effectively, especially as these holes are relatively shorter in length and larger in diameter when compared to typical raise boring projects.

“Sandvik has spent the last year focusing intensively on producing a raise boring machine capable of eliminating the challenges associated with raise boring. And the Sandvik Rhino 100 machine delivers on every front,” Pule notes.

The electro-hydraulic, fully mechanised, self-contained and independent mobile drill, is used in galleries with dimensions of at least 4.5 m x 4.5 m. The equipment is able to perform ascending or descending drilling.

“The machine does not require a concrete pad, additional rock works or any special utilities or provisions other than the ones already established on the equipment.

“It also requires only a single operator – even the drill rods are manoeuvred using a robotic arm. It is for these reasons that we are able to establish the machine in place so quickly, drill effectively and then dismantle and relocate the machine rapidly as well,” Pule outlines.

The Rhino 100 raise borer includes a comfortable, safe, quiet and ergonomic operating cabin. To further assist the operator, the most advanced controls are installed: The Rhino SMART operating system is a dedicated raise boring management software offering various features for operator, manager, maintenance personnel, and mine planner to improve production efficiency, optimise maintenance schedules, and maximise uptime. Additionally, almost unlimited number of cameras can be added to remotely follow the operation, if needed.

Hydraulic jacks and stingers are used to establish the drilling position with actual drilling starting immediately afterwards. The first piece of drill string (complete with pilot bit) is already attached to the gearbox.

This design integrates dust suppression and a muck chute to not only create a dust free drill site, but to take the cuttings away from the rig.

“Our Rhino machine has been in operation in Australia, Europe and West Africa for the last 10-years and has proven its capability over and over again. On the back of this success, we are now looking to introduce the machine to the South African mining sector,” Pule reveals.

Locally, Sandvik does recognise that South Africa’s mines have their own unique challenges and complexities and so the company is currently building simulations and models using its trans4mine resources.

“This will enable us to showcase how the Rhino can operate effectively taking an individual mine’s production requirements into account,” Pule states.

With a fair number of ‘massive mine’ (large-scale ore bodies) in the gold, copper and PGM sectors, Saltiel is confident that the machine will gain significant traction in the South African mining sector over the next three to five years.

“It will be manufactured at Finland, Tampere Production facilities but will be supported locally with after-service and spare parts from South Africa following extensive upskilling of local technicians and Sandvik staff.

“As a production tool, we cannot allow for unplanned downtime due the consequences this has on an entire mining operation,” Pule highlights.

“Ultimately, we believe this machine will become the international standard for slot drilling as it demonstrates and embraces a new mining generation.”

Battery operated the next best thing in drilling technology

The Rhino machine is only one example of Sandvik’s commitment to delivering value-add to the industry through drilling technology innovation.

While this battery operated drill rigs will still delivers production benefits for miners, their first and fore mostly responds to another major challenge in the underground mining space – improving health conditions for miners by reducing diesel fume particulate matter which mining workforces are constantly exposed to – in other words, zero emissions.

Having tested various prototypes for the last few years in Canada, Saltiel says the technology is now ready for off the shelf for high profile equipment.

“For safety first, the thermal energy cannot escape battery packs. Further to this, the batteries are, constructed from sodium and nickel. The battery functions like a vacuum, containing temperatures of up to 250°C within the battery, leaving its exterior completely cool to be the touch during maintenance,” Pule explains.

Charging the drill requires only a 220 V plug or charging whilst drilling. Full charge should be done at least once a week – which can coincide with scheduled maintenance.

“With maximum of four battery packs per drill, this will equate to about 4 km of tramming at a steep incline and up to 18 km on flat ground.”

Operating a drill without using diesel is in itself a massive cost saver – which extends further considering no spare parts and other hydrocarbons logistics and holdings. the savings continue to be realised throughout the lifecycle of the drill – which is anticipated to last between five and 10 years.

There is a question from industry needing to understand if South Africa is ready for battery operated machinery in terms of skills and maintenance. “Naturally Sandvik can assist in training and maintenance as our clients require,” Pule confirms.