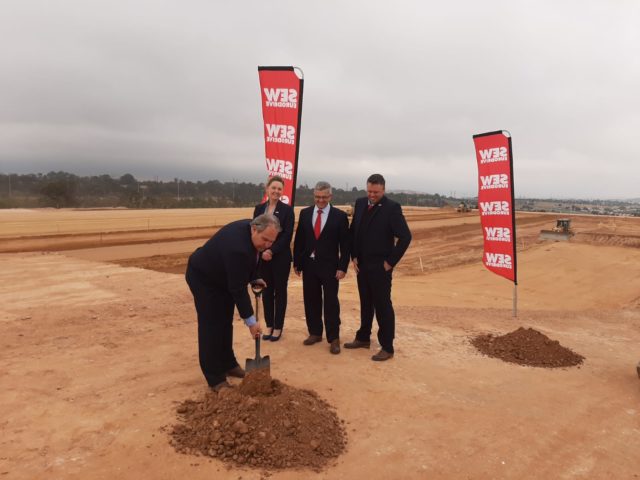 Drive and control technologies specialist, SEW-Eurodrive has announced that construction has commenced on a new R200 million head office and factory in Johannesburg in order to accommodate the company’s growth.

The 25 000 m2 building is being constructed on property acquired by the company two years ago. The necessary earthworks were completed in late September.

Construction is due to be completed by October 2021 and the company plans to move in to its new premises – which will also act as its South African headquarters – in January 2022.

Over a three to five year period the period the factory will be fitted with state of the art, Industry 4.0 compliant technologies including automated assembly machines and guided vehicles which the company anticipates will cost at least another R200 million.

“In order to remain globally competitive it’s important that this new factory is as automated as possible,” reveals Raymond Obermeyer, MD at SEW- Eurodrive South Africa.

The new state-of-the-art, hi-tech facility will allow the company to more efficiently and effectively service customers both in Gauteng and in the rest of Africa, he reveals, adding that the company expects the majority of its growth in the years ahead to come from Africa rather than South Africa.

“We expect African markets to account for 50% of our turnover within the next three to four years, given that growth in many countries around the continent is much faster than it is locally,” says Obermeyer.

“Not only do we expect to see opportunities for growth coming from the establishment of the African Free Trade Continental Area (AfCFTA) agreement, but the removal of border restrictions will make it significantly easier for companies like SEW-Eurodrive to do business on the continent,” he says.

The new factory will accommodate a number of the company’s assembly plants around the country in order to develop better efficiencies and contain costs. SEW-Eurodrive’s existing plants in Nelspruit, Durban, Port Elizabeth and Cape Town will continue to operate with a focus on servicing the company’s national footprint of customers, while its current head office and factory will become a large gear box repair centre, reports Obermeyer.

SEW-Eurodrive, which specialises in manufacturing and supplying gear motors and units, drive solutions as well as various components and supplementary products and services to the mining, renewable energies and industrial sector, has been operational in South Africa since 1986.

“This new facility has been planned for some years already and we’re delighted that construction has finally kicked off, paving the way for an exciting period in the company’s growth trajectory,” concludes Obermeyer.