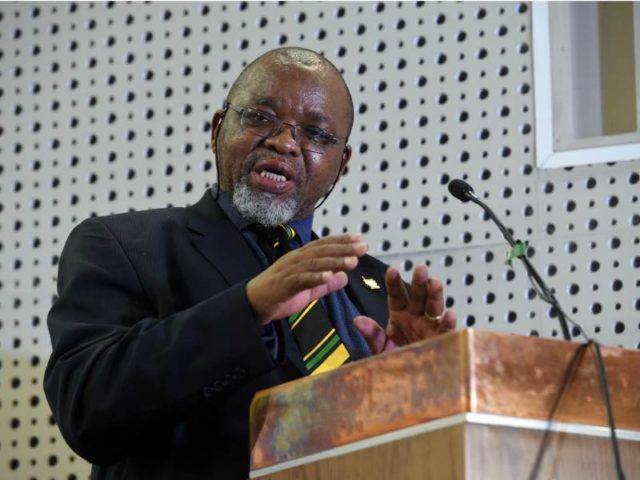 South Africa’s Department of Mineral Resources (DMR) Minister Gwede Mantashe has reminded the country’s mining industry stakeholders that it is their collective responsibility to shape the future and build the South African mining industry brand.

He also urged stakeholders to play their part in working together to make the country a more competitive mining jurisdiction going forward. CHANTELLE KOTZE reports.

Speaking at the signing of the Mining Leadership Compact ahead of the opening of the Investing in African Mining Indaba in Cape Town in February, Mantashe said that the creation of a competitively growing mining industry must be defined by the “ethics, decency and integrity” demonstrated by all stakeholders working co-operatively together, including government, industry and labour.

“While there might be issues we differ on, on these fundamental matters, we are at one,” he noted.

The minister noted that while South Africa still offers excellent economic mining opportunities, the exploitation of such must be done in a socially responsible way with decent pay, labour rights and a safe workplace, all protected by strong trade unions.

“The sector must ensure that mining takes place with a strong focus on the environment and on the interests of all stakeholders, including those who live in mining areas,” he urged.

The aim of the Mining Leadership Compact is to set the tone for a strategy that will seek to attain Vision 2030 – a vision that seeks to make South Africa a competitive mining jurisdiction borne out of sustainable growth and meaningful transformation.

The compact contains areas of focus which all of the stakeholders believe provide the basis for a roadmap to attain Vision 2030.

The compact was signed at the meeting of the Mining Leadership Forum on 4 February 2019 by Minister Mantashe on behalf of the DMR and mining stakeholders; the Minerals Council of South Africa (MSCA) and the South African Mining Development Association (SAMDA) on behalf of the leadership of organised business; and the leadership of organised labour, including the National Union of Mineworkers (NUM), UASA and Solidarity, but excluded the signature of the Association of Mineworkers and Construction Union (AMCU) who was absent at the signing of the compact.

“By signing and implementing this compact, we demystify the popular belief that mining in South Africa is a sunset industry,” Mantashe said.

“We commit all efforts to ensuring that we have a sector that will have a positive impact on the economy and the country at large for many more years to come.

Mantashe said that it is government’s intention that the compact  becomes a living document that will serve as “a growth and competitiveness compass in guiding its decisions on this journey and drive us towards the attainment of our collective vision for 2030, that of a prosperous, competitive and transformed mining sector”.

In a bid to ensure that the compact remains the living and actionable document that government has envisioned, an implementation plan has been developed to keep track of progress made and milestones reached, and will be monitored by the stakeholders through the Mining Leadership Forum.

The forum will oversee the work of specific working groups who will be tasked with implementation and meet on a quarterly basis. The ambitions of this will be developed into a detailed Growth and Competitiveness Strategy 2030, which will be devolved into annual and quarterly milestones.

Expressing its full support for the adoption of the Mining Leadership Compact was the Minerals Council of South Africa. MCSA president Mxolisi Mgojo notes that “the compact represents another step towards ensuring a growing, transforming industry able optimally to serve the interests of all South Africans.”

The MCSA believes that the country’s mining sector has significant potential to be a “sunrise industry” and that all stakeholders have to join hands to create a competitive policy, together with a regulatory and operating environment that encourages much greater investment and ongoing transformation in mining.

“This will not only enable the objectives of the National Development Plan to be met, but will make a material positive difference to the lives of all South African,” he notes.

Also showing its support for the compact was SAMDA chairperson Peter Temane, who says that SAMDA has always supported the government’s efforts to improve the South African mining industry.

Temane however emphasised the need to implement the compact, calling for auctioning of the compact commitments – which SAMDA has committed itself to as a willing stakeholder.

NUM treasurer general Mpho Phakedi indicated the trade union’s support of the compact, noting that it is in the interest of trade unions to support efforts aimed at improving growth, competitiveness and transformation in the sectors in which they organise.

“There is no doubt that competitiveness and growth in the mining sector can be beneficial for both the employers and mineworkers,” he says, adding that the NUM supports the shared commitment in the Mining Leadership Compact aimed at attaining inclusive growth and to ensure that the sector is competitive, growing sustainably and transforming meaningfully.

“More solidarity, not only among union leaders, but the industry as a whole, will enhance the element of oneness the industry is striving for and contribute vastly to the changes and initiatives needed to ensure stability and growth in the mining sector.

Also speaking at the signing ceremony, UASA acting CEO Jacques Hugo said that it was with much caution, uncertainty and sometimes even a level of suspicion that UASA initially set out on the journey of signing the compact, as there have been a number of unsuccessful attempts in the past.

Having said this, UASA believes that the mining leadership compact creates a clear strategy and basis for the sustainable growth and development of the South African mining industry.

“The challenge remains the implementation of the commitments, however the provision that has been made to establish implementation and monitoring mechanisms provide some comfort and we trust that all the stakeholders will participate in the working groups and on the Mining Leadership Forum with South Africa’s interest first before agendas,” Hugo says.