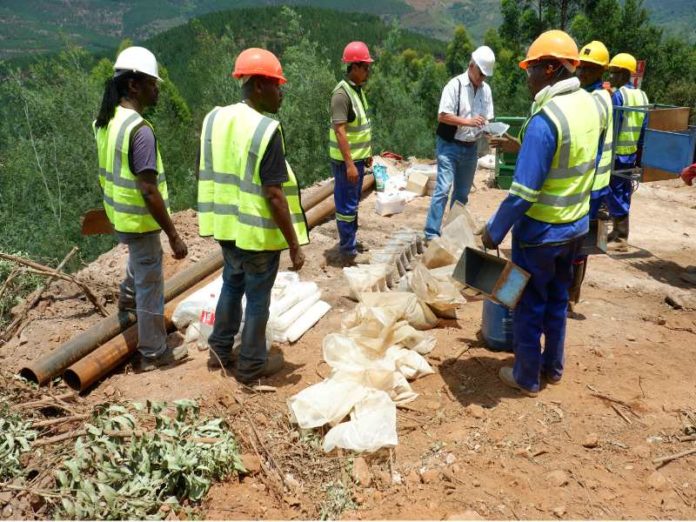 ASX-listed gold developer Theta Gold Mines is making headway with its plans to redevelop +620 km2 of gold-bearing tenements that it owns within the Transvaal Gold System in South Africa’s Mpumalanga Province.

With a clear execution strategy in place, the company plans to initially unlock 2.8 Moz of its 6 Moz gold resources by bringing four mines into production within the next four to five years, starting with the Theta Starter open pits project.

CHANTELLE KOTZE spoke to CEO GEORGE JENKINS on how the company plans to execute this strategy.

Near the towns of Sabie and Pilgrims Rest, 43 historic gold workings now lay dormant, having been mined over a century ago during the gold rush that began in the 1870s.

The company plans to initially delineate and mine high-grade opencast resources, before moving into the development of shallow underground mining operations thereafter, explains Jenkins.

Despite the deepening global impact of the COVID-19 pandemic, and the restriction of movement owing to South Africa’s lockdown regulations, Theta Gold Mines has continued to advance the technical work stream required to bring the project into production.

The ongoing technical work that the company has been advancing includes the finalisation of a number of the project’s key contracts. This includes the progress of the mining contract through to a final document with a preferred contractor, amending of the environmental impact assessment to be in line with the optimised mine plan and the progression of discussions with five engineering firms tendering for the lump sum turnkey gold plant construction contract.

Following the completion of the feasibility study in May 2019 and thereafter a number of specialist study work streams, the company released an optimised feasibility study for the Theta Starter open pits project in April 2020, which is the culmination of all of the former work conducted.

Compared to the May 2019 feasibility study, the optimised plan has a reduced environmental footprint, reflects an increase in the production rate from 500 000 tpa to 600 000 tpa and increases the overall mine operational flexibility.

Of notable interest, the optimised plan has reduced the payback period from 14 months to eight months, increases the mine life from five to six and a half years and adds an additional 40 000 oz of gold to the original feasibility study from 219 000 oz to 260 000 oz over the life of mine.

Five year, four mine plan at a glance

Theta Gold Mines has a five-year plan which targets four mine developments, unlocking 2.8 Moz of its total 6 Moz gold resource and targeting 150 000 ozpa of gold production.

The four mines to be developed as part of the plan are:

The ore that will be mined at these four operations is planned to be processed within the permitted plant footprint area, where a new 600 000 tpa CIL plant will be established.

This plant can be readily doubled to accommodate 1.2 Mtpa of oxide ore with a modest capital expenditure (by building a new CIL stream and purchasing an additional crusher) and minimal operational downtime.

“Our current plant is only constrained by the available annual tailings deposition rate of 600 000 tpa for a total of 2.5 Mt. While sufficient to meet the needs of the Theta Open Cut project, our next phase of work will focus on expanding our tailings deposition capacity,” Jenkins notes.

The Theta Starter open pits project includes the Columbia Hill deposit and part of the Theta Hill deposit within Mining Right 83 (MR83) in the Pilgrims Rest area, explains Jenkins, noting that it is not only the company’s introduction into gold mining in the area, but is also being used as a springboard into our broader five-year plan, says Jenkins.

During the development/construction of the stage-one Theta Starter open pits within MR83, the company will prepare for reserve drilling into MR341, as part of the second mine development – Theta Southern Extension – targeting a combined ore reserve in excess of 500 000 oz and extending the life of the combined project, dubbed the Theta Open Cut project, to 11 years.

The third mine (and first underground mine) to be brought into development will be the Rietfontein shallow underground mine within Mining Right R358/10161, near Sabie, which has a mineral resource of 780 000 oz grading at 8.4 g/t of gold.

This will be followed by the fourth mine, the Beta shallow underground mine, which sits directly adjacent to the processing plant near Pilgrims Rest, which has a large 1.1 Moz mineral resource grading at 6 g/t of gold.

Rich in historic data, the Transvaal Gold System lacks any form of modern-day exploration and, funding dependent, Theta Gold Mines aims to conduct a regional exploration across its tenement holding.

“In the process of conducting the 19 000 m exploration drilling campaign on the Theta project, our knowledge and understanding of the geology in the area was significantly expanded as the drill campaign revealed new geology, and the discovery of two new gold reefs that were previously mis-identified and miss named. This further solidified the importance of undertaking additional regional drilling on site,” says Jenkins.

Theta Gold Mines contracted CSA Global to analyse the regional geology to better understand the geology surrounding the Theta project and to help identify target areas for exploration drilling to extend the resource even further.

While the company’s focus remains on advancing the larger Rietfontein and Beta mines, where historic data is readily available, allowing for quicker advancement, there are several other historic mines on the company’s list for further work.

For the remainder of 2020, Theta Gold Mines will continue with project execution and operational readiness planning as well as the selection of the two key contractors.

For the longer term, the company will examine expanding its drilling programmes to increase the mining reserve to support a larger production profile as more mines are brought on line.