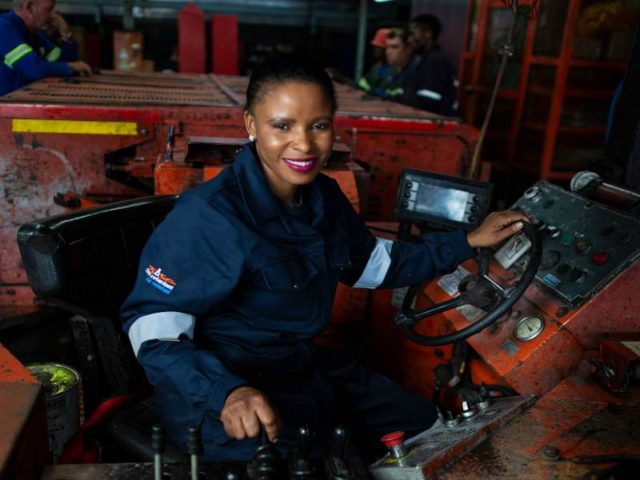 The number of women working in the mining sector has increased significantly over the past 17 years, with the numbers growing from 11 400 in 2002 to over 53 100 today.

However, an area that has lagged significantly in the facilitation of women’s entry into mining has been the provision of Personal Protective Equipment (PPE), designed specifically for women miners.

This can largely be attributed to a general lack of awareness within the industry, with many still considering PPE for women as being more about adding a “feminine touch” rather than addressing the practicalities of workwear that is tailored to the female anatomy.

A commonly observed trend is that many companies still procure male and/or unisex safety wear due to a lack of understanding that the anatomy of a women differs greatly to that of a man and, as a result, the PPE procured should reflect that.

Comfort can have a profound effect on productivity, which means that ill-fitting PPE could seriously impact a wearer’s quality of work.

A critical consideration is thus that ill-fitting safety footwear and workwear leads to several issues, which include discomfort and pain, lowered productivity, absenteeism due to health-related problems such as urinary infections and even a psychological barrier to the work environment.

Industrial psychologist Uma Naidoo says if one is not comfortable in their attire, in which they spend about eight hours of the day, it could lead to frustration, poor concentration, increased breaks and many other debilitating effects on productivity.

She says workers who are uncomfortable in their clothing, are not functioning at their best.

The mining industry has traditionally been a male-dominated space, particularly with regard to heavy work and – despite many strides having been made in terms of gender inclusivity – the environment still remains a tough one for women.

It must be remembered that even performing basic bodily functions still holds significantly more challenges for women miners than their male counterparts.

For instance, consider that the simple task of going to the toilet can be a hardship. Often, women who work underground must walk to toilets that are up to 400 m away from a blast site (legal requirement) just to relieve themselves.

Another challenge upon reaching the toilet is the removal of the garment. Because women are making use of a men’s boilersuit, the only way to relieve themselves is to unzip the boiler-suit and remove it in its entirety (from top to bottom).

To do this, women further need to remove other parts of their mandatory kit, such as their hard hat, safety pack and torch battery.

Another factor that affects a women’s dignity is that the colour of their underground mining boiler suit is unbleached. When women have sanitary-related accidents underground, it shows up on this colour and exposes the accident to all.

Thus, the issue of discomfort due to design, as the anatomy of a woman is different to that of a man, is a critical point that needs to be explored when considering the health and well-being of female workers on the mines, as well as increased productivity.

To address this, a range of safety wear that challenges the status quo that one size fits all has been designed through extensive research and consultation with women in industry.

This includes a ground-breaking boiler suit for women miners, which includes innovative features such as the V-flap at the back of the boiler suit to improve the ease with which women use ablution facilities and the inclusion of navy fabric between the hip and thigh area to save her the embarrassment of a sanitary-related accident.

Now, when going to the toilet, the top part of the boiler suit does not need to be undone or removed, due to the V-flap design in the back, This makes it easier for women to relieve themselves more regularly rather than holding it in for the greater part of the shift, compromising on their comfit and increasing the chances of a urinary infection.

The design of the boiler suit is cut according to a women’s anatomy with a narrower back area, and wider front area and shorter crotch to waist ratio than a man’s.

Also, women naturally have wider hips and a more pronounced posterior, which is accommodated in the design, allowing for the elasticated waist band to rest where a women’s waist line typically is and not where a male’s waist line would be.

For above ground workers, female conti suit jackets are tailored at the back, to accommodate for a women’s narrower back, but broader at the front to accommodate for her bust area. This enables a woman to move freely within her jacket without restriction when moving her arms.

Trousers are also designed to have a higher waist to prevent the exposure of the back and midriff regions when bending over or raising arms.

Garments designed for men often result in trousers that sit below the belly button and place pressure on caesarean scars, and expose the upper half of a women’s posterior when she bends over.

To combat this, women have tendered to wear nylon tights underneath their pants for modesty purposes. Nylon does not absorb moisture, keeping the skin damp during the day which becomes a breeding ground for bacterial and fungal infections.

Furthermore, because sweat in not absorbed, the salt crystals remain on the skin, rubbing together causing chaffing. In hot, moist environments, many women contract bacterial and vaginal infections due to such undergarments.

If the mining industry is truly close the gender gap, more needs to be done than simply hiring women to make up the numbers. A holistic approach needs to be taken to address the physiological requirements of a female workforce to put women on an equal footing with their male co-workers.