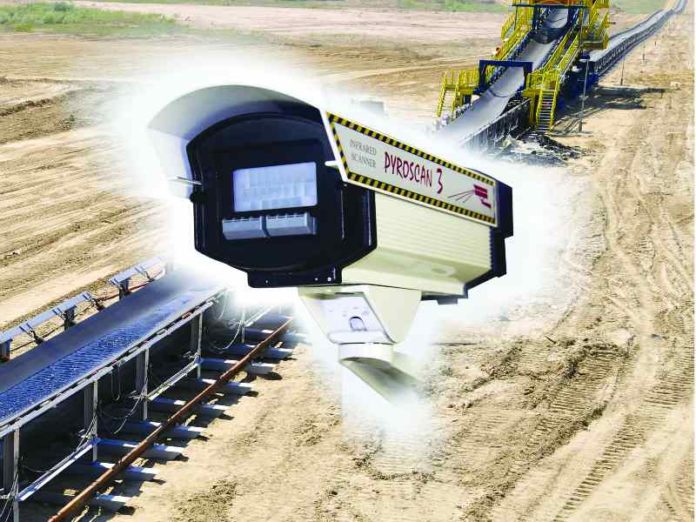 When a fire breaks out on a conveyor belt, the consequences can be devastating. Not only can it result in a considerable loss of profits and downtime but it also puts mine workers in harm’s way.

GERARD PETER spoke to Sales Director GRANT WILKINSON about why the Pyroscan3 is so effective in protecting conveyor belts.

A conveyor belt on a mining site is a single line transportation system that can span several kilometres, both underground and on the surface. Should a fire break out anywhere on the belt, operations have to be halted immediately.

“A conveyor belt comprises rubber and as such, a fire will rage on as the rubber burns,” states Wilkinson.

“This is particularly dangerous in underground operations where a conveyor belt fire can create an inescapable prison as rescue teams have to wait for it to die down.

Also, the heat that a conveyor belt fire emits can span up to 50 m away from the source of the fire, making it even more difficult for that fire to be suppressed.”

Wilkinson continues, “The smoke created from conveyor belt fires is toxic to humans that can lead to death. Furthermore, it impairs visibility and can present a serious threat to escaping miners trying to exit the affected area.”

Ultimately though, these belts still have an ignition temperature although this temperature is higher than standard belts.

If sufficient energy is applied to a fire retardant conveyor belt from a jammed idler for example, they will still ignite.

In order to prevent such catastrophes fire detection systems can help Wilkinson explains. However, traditional infrared (IR) detectors are not as effective because they detect flames which, at that stage, could be too late.

No flames and smoke

AST’s Pyroscan3 fire detector is able to detect a potential fire before there is any sign of smoke or a flame.

“Pyroscan3 is a low energy black body radiation IR detector that enables the detection of both small glowing embers within direct sight of the sensor, and abnormal black body low energy sources buried within the transported material plus an overheated conveyor belt that would not be registered by other types of flame, spark or ember detector,” says Wilkinson.

“Using sensors located on different detection zones along the belt, Pyroscan3 is able to sense moving hotspots, not just on the belt but also among the minerals being transported.”

Essentially, Pyroscan3 picks up any sign of a fire at the incipient stage.

As such, the conveyor belt can be stopped immediately and any fire can be extinguished automatically via an automatic extinguishing system such as water deluge or sprinkler system or controlled by portable firefighting equipment.

As such, it is an ideal choice for integrating with water-based extinguishing systems on conveyor belts.

Pyroscan3 comprises a sensor head containing 16 sensing elements which are enhanced by a Fresnel lens, a microprocessor based controller, connection cable and a high pressure air pump contained in a clean air box that is connected to the sensor head via a flexible hose.

Its configuration options allow for the functionality of the system to be extensively modified to suit difficult mining site conditions.

Other unique features include configuration via a remote PC to enable further customising and the fact that the Pyroscan3 is highly immune to ‘electrical noise’, typically found in mining locations.

Furthermore, in order to maintain the integrity of the system, clean air is continuously blown over the Pyroscan3 detector lens via its own supervised air knife system.

The introduction of the Pyroscan3 has been well received. Already the system has been installed in various mining sites in Africa including Exxaro’s Grootegeluk coal mine in Limpopo and Sappi Paper Mill in Springs. Mondi Paper also have such systems installed as well as many other mining sites across Africa.

As the industry works towards ensuring Zero Harm and strives to remain profitable, the Pyroscan3 is an effective fire detection system that not only ensures that productivity is not jeopardised but also that mineworkers’ lives are not at risk because of conveyor belt fires.

AST also has Linear Heat Sensing Cable as an add-on. This can provide confirmatory signals from a different fire sensing mechanism in order to operate an automatic fire extinguishing system.

Our Linear Heat Sensing cable is both cost effective with neat value-added features such as providing accurate visual indication of the location of the fire in meters and feet.

In addition, the controller unit has an RS485 Modbus Ready-To-Use output that can stream this information to a site-wide mine management system. Heat sensing alarm trigger points are optional and can be tailored to suit the environment it is being used in.