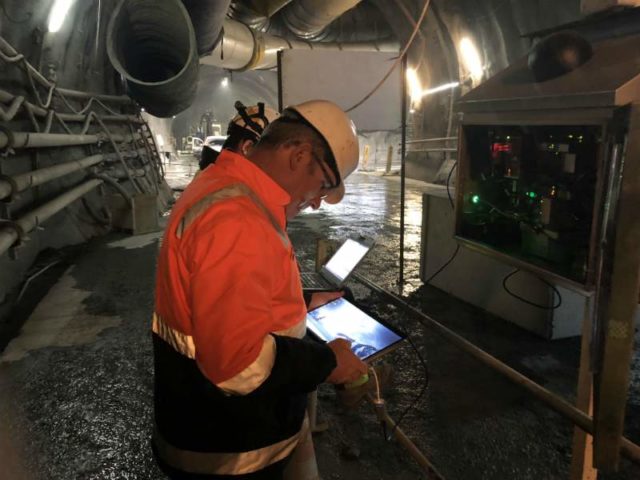 The South African mining industry’s focus on the health and safety of its workers makes it uniquely placed to adopt world best practice in the real-time monitoring of Diesel Particulate Matter in confined spaces.

That’s the view of an Australian businessman whose company has developed the world’s first real-time DPM monitoring system that is set to revolutionise the safety of mining operations across the world.

The system has been designed to deliver reliable DPM data to management in real-time, via smartphones, tablets, laptops and desktops. It is ready for deployment in many environments, particularly underground mines, where diesel engine exhaust emissions present a serious health threat to workers.

Pinssar owner and managing director Francois Velge, who spent four years developing the ultra-low maintenance continuous DPM monitor specifically designed for harsh environments, said South Africa was a shining light in the protection of mine workers and his company’s system could enhance that even further.

“South Africa’s tripartite MOSH process, where miners, unions and regulators work together to protect mine workers, is unique and something the country’s mining industry should be proud of,” Velge said.

“Globally, the new gold standard for regulator support is coming out of the UK with the release of the British Standards (BS 6164) that clearly states the dangers of diesel particle matter and the recommendation that real- time DPM should be undertaken in confined spaces.

“But I believe South Africa leads the way internationally in mining with its step-by-step validation process of best-in-class technology and systems designed to support the evolving DPM regulatory changes in the mining environment.

“A large number of safety initiatives are covered in the MOSH process and the industry has recently completed the process to enable the monitoring of dust and noise.

“I believe the South African mining industry is perfectly placed to consider including real-time DPM monitoring in the MOSH process and making it the gold standard for all mining operations in the country.”

Velge said the real-time capabilities of Pinssar’s monitoring system meant protecting the health of workers was paramount, as it had previously not been possible to monitor DPM and sub-300 nanometre particles in real-time in harsh environments.

“Current random spot checks via handheld monitors or personal gravimetric systems, offer some localised benefits however, because they require off-site processing and analysis of samples this creates long delays in understanding the level of the threat and makes real-time decision making impossible ,” Velge said.

“That has meant workers could be exposed to unsafe conditions for up to three weeks while conventional test results were processed.

Pinssar’s monitors are being used in sites across the world, with operators reporting greater confidence in working conditions and workers feeling reassured they are working in a monitored and safer environment.

Velge said the South African mining industry was focused on moving away from Tier One diesel engines to the cleaner Tier Three engines and using real-time monitoring of DPM would help validate the process and offer quantitative, real-time measurements of the outcomes associated with that expenditure.

“While saving lives is the critical reason for making such a change, there are also potential cost savings associated with ensuring mine workers have a healthy and safe environment,” he said.

“Providing ventilation chews up between 40% and 60 % of all electricity costs in the mining process, so there is the potential for huge savings.“

Velge said an added bonus was that Pinssar’s DPM monitoring system was compatible with both  Vuma 3D and Ventsim 5 ventilation simulation software, or other SCADA based control and response systems, so could provide real-time DPM monitoring alongside their existing monitoring of temperature and humidity, toxic gases and air velocity.

“The benefits of including the Pinssar monitoring systems in the South African mining industry are many,” he said.

“The focus of our DPM monitoring is managing the effectiveness of engineering controls as well as enabling real time actions and responses to a group one carcinogenic.

“It can monitor a whole mine simultaneously and in real-time, enabling customers to move away from a reactive mode to one where they can drive a proactive approach.”

Velge said he believed it was important for mining companies to understand that rather than being fearful of their DPM levels, Pinssar was specifically designed to confidentially help them by “monitoring to manage” DPM levels and trends over time.

It had the unique ability to support risk mitigation by ensuring companies understood their DPM levels and could work proactively to minimise the risk, while having supporting data to protect themselves against false claims.

“So, we feel very confident that ultimately both the South African workers and managers would benefit by deploying the Pinssar real-time DPM monitoring system,” he said.

“When considering real-time monitoring, we would always caution our customers to remember that while DPM is reactive and on occasion high levels will be naturally occurring on any worksite, as a direct result of the interactions between the emitting technologies and the ventilation; it’s actually not that useful to know.

“Don’t be fearful – it is highly likely your DPM averages are not as bad as you think, and it’s better to know than to worry unnecessarily.

“And finally, do not collect data for data’s sake. Form a DPM committee, manage the data and test your controls, and if your strategies are not working as you hoped – pivot and drive another strategy in pursuit of a safer, healthier, more productive operation- this is the key to the value in real time DPM monitoring.

“But ultimately – “together we will save lives.”