Mboweni’s Budget Speech gets nod of approval from Minerals Council 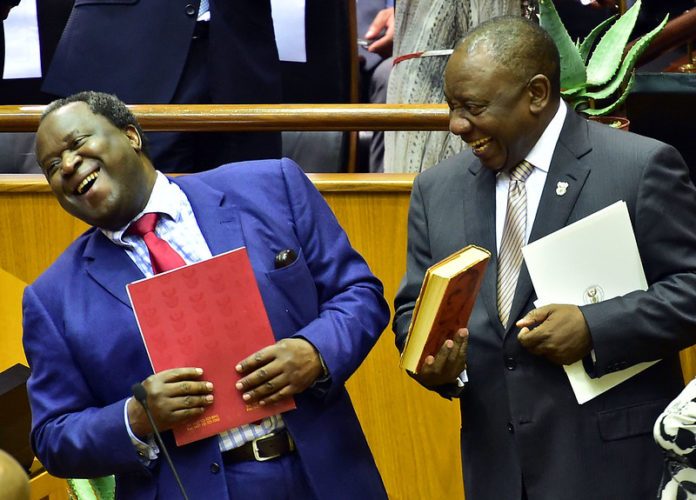 The Minerals Council South Africa believes Finance Minister Tito Mboweni has taken several important steps to begin to address South Africa’s economic crisis, building on the direction offered two weeks ago by President Cyril Ramaphosa in his State of the Nation Address. But it is just a beginning.

At the forefront of these steps is the commitment from Mboweni to achieve more than R50 billion a year in reduced spending, largely through trimming the State wage bill, removing funds from government departments that haven’t used them and by cutting various forms of wasteful expenditure.

That education, health and police spending will not be targeted in this exercise provides a vision that critical social and security services will not be compromised.

“The Budget deficit to GDP ratio of 6.8% in 2020/21 remains high, and the reduction of the deficit to 5.7% over three years is in the right direction but too slow.

“Importantly the primary deficit narrows from 2.6% of GDP in 2020/21 to 1.1% of GDP in 2022/23. Ultimately South Africa has to achieve a primary surplus (where non-interest revenue exceeds expenditure) in order to stabilise the deficit and debt levels.

“It is critical that public sector debt service costs are reduced so that they are no longer a major encumbrance on society. So further hard work is required on managing expenditure growth downwards.

“South Africa needs to reach a point in no more than five years where the country is no longer having to increase its borrowings in order to service its interest payments. Still, it is recognised that the Budget maps out a reduction in real non-interest spending.”

The Minerals Council appreciates that this effort to address the deficit and the debt mountain is being done without the introduction of significant new taxes or raised tax rates.

Our tax rates at the corporate and personal level are already uncompetitive, and to raise them would damage prospects of what really needs to be done to escape the economic crisis.

The fiscus cannot afford more billions being poured into South African Airways, an institution that has no unique strategic value to South Africa.

And any future subsidies to Eskom absolutely need to be conditional upon that organisation restructuring itself so that it ceases to be a drain on the fiscus and the economy.

The Minerals Council expects Eskom to do much more work on reducing its internal cost structure in order to be more competitive.

The Minister’s proposed cap on excessive executive salaries in public entities is welcomed. And an end to business class travel on internal flights would provide a helpful signal to the public at large.

What needs to be achieved is a growing economy where there will be more business activity and more jobs, hence broadening the corporate tax base – a goal Minister Mboweni emphasised this afternoon.

As we know, Eskom’s near monopoly on South Africa’s electricity supply has taken a huge toll on the economy. Industry estimated that power cuts caused losses of about 0.1 per cent of GDP in the fourth quarter of 2019.

Read: Government must make Eskom board fit for purpose

The Minerals Council believes this number is far higher in terms of its impact on mining production and on confidence. Without urgent intervention, the impact of supply interventions will cut deeper in 2020.

What we wait to see is the acceleration of the necessary regulatory adjustments.

We agree with Minister Mboweni that regulatory processes need to be simplified to meet deadlines for responses to licensing applications.

There is no doubt that self-generation will plug a hole in short-term supply deficits by reducing demand pressures and raising overall supply.

The mining industry alone can deliver some 2.3MW into the system within the next 36 months. The Minerals Council urges government to reduce all regulatory obstacles to these plans being approved and implemented.

What we would have liked to see is the introduction of incentives to promote energy efficiency and demand management.

This could include incentives for the installation of energy efficient equipment and support and incentives for investment in renewable energy generation.

We also acknowledge that climate challenges represent opportunities to generate new economic activity and note that carbon taxes will bring in R1.75 billion over the next few months and be complemented by more focussed spending on climate change mitigation.

What is still outstanding, however, are the details of phase two implementation of the carbon tax.

This has serious implications for the investment decision processes of electricity intensive industries. We need more certainty on these offsets, performance incentives and the tax-free portions of the carbon tax regulations that kick in 2023.

These reforms, particularly of the electricity and transportation sectors, will go a long way to attracting private investment and improving the county’s growth outlook.

In our opinion, improvements in network industries are key to higher confidence and growth. Again, what we would like to see is urgent progress being made towards the implementation of these reforms.

The Minerals Council particularly welcomes the additional R2.4 billion provided to the National Prosecuting Authority, the Special Investigating Unit and the Directorate for Priority Crime Investigation.

We trust that this will give rise, at the very earliest opportunity, to the launch of prosecutions of the high-profile individuals responsible for the state capture activities that led us into this crisis.

The prosecutions must also include the private sector business leaders who have cost their shareholders, which include the savings institutions serving millions of ordinary peoples’ hard earned savings.

“The Minerals Council South Africa hopes that this Budget will be deemed adequate to save South Africa from losing its last investment grade rating, that of Moody’s.

If this is achieved, it will assist significantly in achieving the growth goals by reducing foreign share portfolio outflows, restraining borrowing costs and limiting the depletion of reserves.

However, there is much more hard work to be done to stabilise the fiscus and make South Africa attractive for investment and growth. This budget was a positive first step”.