The work must go on: Ebola and its effect on business in Sierra Leone

by Duncan McNicol, the Country Director for Kanu Equipment

Ebola is without doubt an extremely serious and economically devastating phenomenon in Sierra Leone. Unexpectedly, as an expatriate working here, you do not see it the way it is portrayed in global media, it isn’t ‘in your face’ and you feel generally immune from it. Earlier this year, Ebola hotspots were mainly in the provinces, but it has recently spread to the city and this is where it has taken a new dimension due   to the proximity of the people and the hustle and bustle of daily life.

From an economic perspective, Sierra Leone and Liberia have been devastated by this outbreak. Plantations are unable to continue 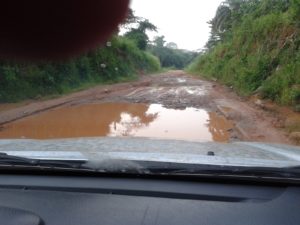 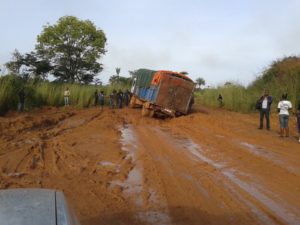 farming and have missed the planting season. Mining companies are going into receivership and workforces are being significantly reduced, and demoralised. A lot of companies have closed altogether or at least have been mothballed. Import ships are not calling, planes have stopped landing and goods are not coming across the borders.  As a result, there are food scarcities and prices of all goods and staples have rocketed.

After protracted civil wars (between 1991 and 2002 in Sierra Leone and two civil wars between 1989 and 2003 in Liberia), the GDPs were starting to rise significantly and there was a general mood of optimism and hope that soon they would catch up with neighbouring countries Ghana, Cote D’ Ivoire and Nigeria. It has been said that Ebola has set these countries back by five years.

I arrived in Sierra Leone to set up Kanu Equipment SL Ltd in early August 2014, just as the regional and international carriers started cancelling scheduled flights to the main epicentres of the outbreak in Sierra Leone, Guinea and Liberia. At this time, the government also announced that all bars and restaurants were to be closed. There were to be no mass gatherings and travel within Sierra Leone was to be strictly controlled. In September, there was a complete lock-down of the country Rightly-so, this created a sense of foreboding, doom and gloom. In addition to this, companies employing significant expatriate management work forces sent them home, leaving inexperienced local management to run the companies. This gave a feeling that Sierra Leone’s shop was now “closed for business” and it was not a good time for companies like Kanu Equipment, who sell and rent earth-moving equipment, to enter the market.

However, there was glaring need to be upbeat and give a positive outlook to potential customers. Keeping up customer relations was very difficult. Key management may have travelled or resigned altogether, there are endless hand washes to be done, movement about the country is restricted so a car pass had to be obtained by somewhat devious means.  Endless road blocks, manned by both police and army personnel where you must disembark each time, have your temperature checked and wash your hand. If you do eventually get to your destination, the site is either quarantined or access is restricted. Lastly, there is the inevitable moment of embarrassment where you try to gauge whether hand shaking is appreciated or completely taboo. I have devised a way of avoiding the embarrassment by always having my business card in hand as the first thing to offer forward.

Once in front of the person we want to see, the mood changes. Its becomes a fabulous opportunity to promote the company and show we are still creating a footprint throughout West Africa even in these difficult times – we are here to stay. The reaction has always been one of surprise at our determination, gratitude for taking the effort to establish contact and for demonstrating that we are not about to run away and abandon our customers.

I recently visited a company in the diamond town of Koidu, on the eastern border close to Guinea. The journey took nine hours from Freetown to Koidu, there were 17 road blocks en route. The last 70km took four hours because the Chinese contractors who began the road rehabilitation before the rainy season had ripped off the old surface and then abandoned it during the outbreak. The result is a road practically impassable and which is the only route into this very important town. 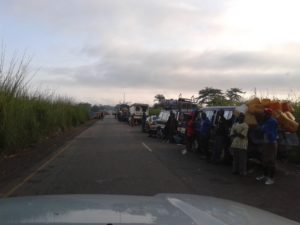 Once reaching the mine site, there was an hour of negotiating to get in. Then after the meeting we searched Koidu for a guest house however all had closed down as a precautionary measure. We did eventually find a roadside café which offered one plate of chicken and rice between us (it was all they had left to offer). We were then told of a place where we could possibly find a bed. They were closed but allowed us to sleep in two rooms – no light, no water, and plenty of mosquitoes. The Koidu meeting lasted half an hour! It was very successful and well worth the effort.

In my travels, as an expat, I had felt fairly removed from the seriousness of the situation, even complacent to a point. It is not until you witness some of the effects and disruption that you begin to appreciate the scale and reality of the situation.

The ambulances flying by with fully protected staff inside, the hearses, the glimpse of a recovery team in a small village, the man in the queue (one place ahead of you with a temperature of 39.7 suddenly taken to one side), the occasional corpse in the street unattended, the numerous treatment centres being erected, the stories of 50 people breaking out of a treatment centre because they were afraid, the videos of Ebola sufferers being turned away from hospitals due to lack of beds, the orphaned children…

Provided we (as employees of Kanu International) act in a responsible way, display dignity toward those that have suffered and be aware of the simple measures that can be employed to prevent contamination, there is no reason why our business and indeed others could and should not remain in these countries and contribute towards the re-growth of West Africa.

It must be remembered that Ebola will be contained and eradicated. Government are already planning a post Ebola recovery strategy. Sierra Leone needs the formal economy to continue as an integral part of its stability and long term prosperity.