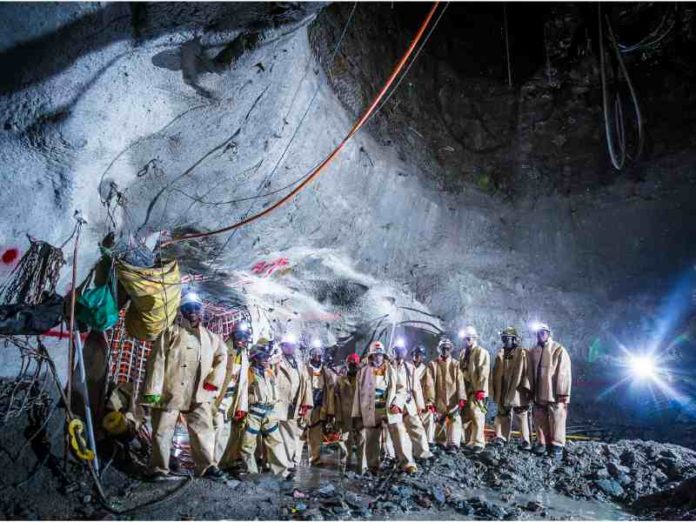 “We remain on time and budget, are delivering an excellent safety performance and our monthly vertical development (sinking) metres are undoubtedly a record in the sector”, says Aveng mining senior contracts manager Patric Scheepers.

The development of the multi-billion dollar Platreef project, situated on the Northern Limb of the Bushveld Complex, represents a significant investment in South Africa’s mining sector as one of the largest mining projects being undertaken in the country at present.

“We are extremely proud to be associated with such a large-scale, world-class project,” says Aveng Mining MD Stuart White.

The Platreef project is not only phenomenal in size – a definitive feasibility study that covers just the first phase of production indicates an initial mining rate of 4 Mtpa and an initial, average annual production rate will be 476 000 oz of platinum, palladium, rhodium and gold – it also comprises an ore body unlike those traditionally found in the PGM sector.

“The Platreef ore body is ultra-thick and averages 19 m in width. Because it is largely flat in shape,we shall be using highly mechanised mining techniques.

Aveng Shafts & Underground, a division/cluster of Aveng Mining, was awarded the shaft sinking contract for Platreef Shaft 1 in 2013 (including boxcut, pre-sinking activities and development of two access stations) and commenced with full shaft sinking in the third quarter (July) of 2016.

“Based on the merits of our tender submission which was cost effective, offered extensive sinking experience, a lengthy track record and the necessary equipment to undertake the contract, we were the right company to deliver this significant contract.

“And, despite a few challenges at the start of the project, we have fully committed to this project and over the last 12 months have excelled in every aspect of our activities – especially with regards to safety and development metres which on average total around 50 m a month.

“We in fact achieved a record monthly shaft-sinking rate of 54 m in March,” Scheepers outlines.

Reviewing the sinking performance over the last year, the company sunk the shaft from 234 m in February 2017 to 750 m a year later after moving to a continuous operations model with 340 permanent employees and an additional 50 subcontractors.

“As a team we elected to transition from a conventional sinking approach to a two kibble-loading methodology which removed employees from the shaft bottom during lashing operations.

“This required careful engineering and change management at the time and was a major success.”

Shaft sinking at Shaft 1 is now at 750 m below surface, close to shaft bottom being 980 m.

The 750 m mark is a major accomplishment as it enables lateral development of the first mine access station to commence.

This station will provide initial underground access to the high grade Platreef ore body, enabling mine development to proceed during the construction of Shaft 2, which will become the mine’s main production shaft.

It will also allow access for the first raise-bore shaft that will provide ventilation to the underground workings during the mine’s ramp-up phase.

Sinking of Shaft 1 will resume after the 750 m station is completed in the next few months.

“The shaft is expected to intersect the upper contact of the Flatreef deposit at approximately 783 m during the second half of the year,” Mouton notes.

For now, Aveng Shafts & Underground’s contract is to conduct all sinking activities to 800 m but Scheepers notes that the company is well positioned and ready to complete sinking to 980 m should Ivanplats extend its contract to do so.

He attributes the company’s sinking successes not only to its skills set and commitment on site, but also largely to the close knit relationship Aveng Shafts & Underground has established with the Ivanplats team.

“This relationship has been key to our performance and as a united team we are able to deliver on the required delivery goals,” White highlights.

“The sinking safety statistics are equally impressive – as of 23 April the company reported that it had recorded 160 days without a single lost time injury.”

Having successfully completed an access station at 450 m below surface, the company commenced with development of the 750 m station in April this year.

It will be established up until 50 m from the shaft perimeter on the East side of the 7.25 m diameter shaft.

Aveng Limited has announced a strategic new vision for the company that will see it retain business units it considers core to the business and divest of others. Aveng Moolmans and Aveng Shafts & Underground have already merged into a single entity and will be termed Moolmans in future and comprise one of two remaining businesses, the latter being infrastructure specialist McConnell Dowell in Australia.

“The board and management acknowledge the challenges ahead and believe that this is a balanced plan that will deliver and unlock value for all stakeholders,” White notes.

“The intention is also to focus on securing work in Africa, where Moolmans has been operating for decades, and then to look further afield in regions including the Middle East, East Asia and CIS territories.”

The underground portion of the business is smaller today than 24 months ago as a result of various contracts concluding around the same time.

“Nonetheless, this is a clean business, with no outstanding commercial issues, operates well and is now ready to grow.”