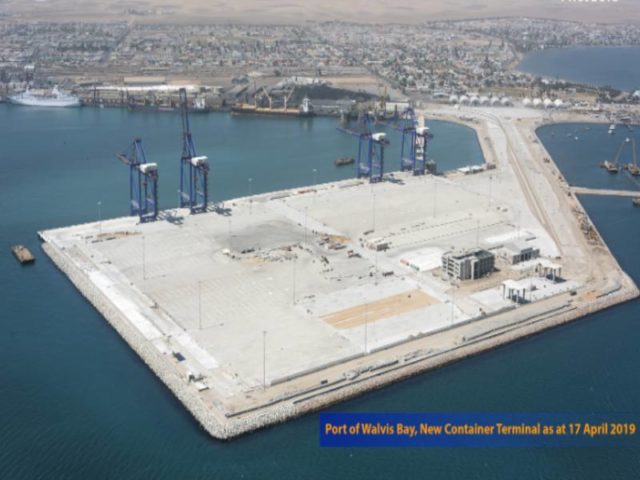 The President of the Republic of Namibia has inaugurated the Namibian Ports Authority’s New Container Terminal at Walvis Bay.

The inauguration was a jovial and colourful event attended by various political leaders and dignitaries from all sectors of the country and beyond.

Namport will commence with the relocation of all equipment, containers and personnel from 17 – 23 August 2019.

All operations will seize for this period to ensure everything is relocated safely and successfully.

On Saturday, 24 August 2019, the New Container Terminal will be commissioned and all operations convene.

Read more about mining and infrastructure in southern Africa

The relocation process started from 25 – 26 July 2019 with the 6 Rubber Tyre Gantry’s (RTG’S) successfully relocated to the New Container Terminal.

The construction of the Port of Walvis Bay’s New Container Terminal on reclaimed land commenced in mid 2014.

This entails the creation of 40 ha of new land reclaimed from the bay within Namport’s current port jurisdiction.

The new reclaimed land is created by dredging or deepening the port and using the sand obtained from deepening to form the new land.

The reclaimed land will be linked to the existing port land by a causeway. A modern container terminal will then be built on the newly reclaimed land and will consist of quay walls, paved areas, buildings, roads, railway lines, ship-to-shore quay cranes, rubber tired gantry cranes, etc.

The New Container Terminal will have a capacity of at least 750,000 TEUs per annum, whilst ample space for optimisation and expansion of the initial facility exists.

The project will not only provide increased container handling capacity in the Port of Walvis Bay, but will also increase the port’s bulk and break-bulk handling capacity by freeing up the existing container terminal to become a multi-purpose terminal.

The New Container Terminal project will add an additional 600 m of quay wall length to the existing 1,800 m, which will enable major rehabilitation of existing quay walls to occur with minimal disruption to operations.

The two new berths at the new container terminal will be berth 10 and berth 11. Berth 9 is the new passenger liner berth also currently under construction.