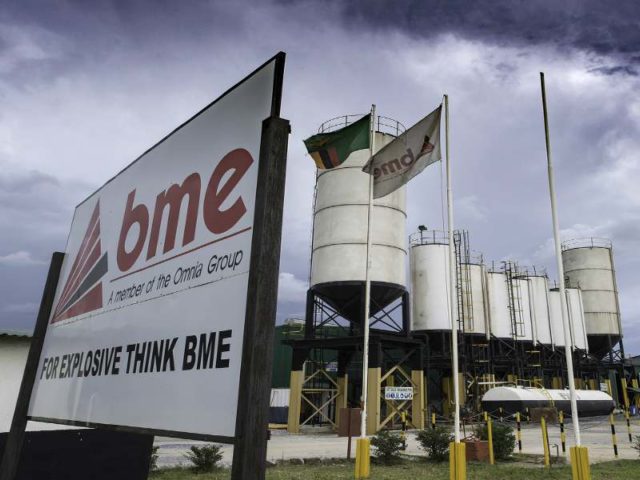 Blasting and explosives specialist BME is four years into a five-year strategy in which it aims to leverage its South African assets and manufacturing capabilities to grow into Africa as well as internationally.

Well on track with its objectives, MD JOSEPH KEENAN notes strong growth achieved in 2018 on the back of the company’s investment in strengthening its business processes, manufacturing capabilities and growing its geographic reach – targets which the company aims to solidify and strengthen even further in 2019, writes CHANTELLE KOTZE.

Through its five-year reorganisation, restructuring and recapitalisation strategy, aims to create a diverse company able to withstand changes in any one of the markets in which it operates.

This, Keenan believes, will create long-term sustainability for BME, whose business model remains firmly based on delivering value to its customers by helping the mining sector improve its productivity and add value to operations while delivering cost effective products and services.

Recapping on what BME has achieved over the past four years, Keenan outlines that BME has steadily expanded its emulsion production facilities at its Dryden INNOVEX manufacturing plant, automated the production lines at its non-electric assembly facilities at the Losberg shocktube assembly plant, as well as added two automated AXXIS digital initiation assembly lines at BME’s Rustenburg facilities.

The company also invested further into improving and upgrading its digital capabilities including its software and productivity tools, such as the release of its latest generation trademarked BLASTMAP III blast planning and design software in 2018, as well as its XPLOLOG mobile application designed as a tool to capture detailed blast information on each blast hole. XPLOLOG can be used to upload and download data, presenting it on a dashboard for better management decision-making – and integrates with BLASTMAP™ III design software, allowing users to view and edit XPLOLOG designs in BLASTMAP III, and to sync designs from BLASTMAP III to the XPLOLOG database.

Moreover, BME has invested in upgrading its underground blast control system – the AXXIS centralised blasting system – which allows underground mining operations to initiate blasts from a safe and convenient place on surface as well as allowing operators to take action before a blast instead of just remedial action afterwards.

More recently, BME acquired its joint venture partner in Australia, Advanced Initiating Systems, which it has renamed to BME Australia as a means to rebrand and expand BME’s technical services and products in Australia.

In so doing, BME has increased the size of its operating footprint into New South Wales and Queensland and is looking to expand into Western Australia.

BME has also managed to establish a footprint in South America, North America and the United States (US) notes Keenan.

In South America, BME shipped its first orders of AXXIS electronic detonators to Colombia in 2016, and has expanded sales into Peru and Chile throughout 2017 and 2018.

In the USA, BME took its first steps into the market in 2016 with six successful test blasts using its digital initiation system, blast planning software and electronic detonators, and has since has then taken another important step in internationalising its footprint by supplying its AXXIS electronic detonators to customers in the US, as well as opening offices in Denver, Colorado in 2018 as a base for its USA presence.

In North America, BME began to supply its trademarked VIPERDET non-electric system in Canada in 2017.

The company has also appointed a country manager and acquired storage assets to help better service the region and spearhead future growth.

BME is also nearly complete with regards to finalising the regulatory approvals relating to the sale of its AXXIS electronic detonators into Canada, after two years.

In line with BME’s steady expansion into international markets and the need to have one streamlined and easily identified global brand, the company has undergone the successful global rebranding of its surface and underground ammonium nitrate product portfolio to INNOVEX – which denotes BME’s innovative explosion technology.

In March 2018, BME introduced the trademarked INNOVEX™ brand to market.

“We have gone through great effort to get ourselves structured and systematised to be able to take advantage of our capabilities,” saysKeenan, who is keen to begin realising the hard work that BME has put into the company for the past four years.

This investment into the “infrastructure” of the company as Keenan puts it, will undoubtedly stand BME in good stead going forward in opening the doors for BME to enter into new markets.

On the African continent, BME continues to strengthen its presence in both Central and West Africa – where it has already created two hubs, one in Bamako, Mali to serve the West African region and one in Zambia, able to serve the Central Africa region.

In Central Africa, BME has opened a new office in Lusaka and a storage facility and distribution centre in Solwezi, Zambia to better service the Central African region.

Meanwhile, in West Africa – which is poised to become one of the top five gold-producing regions in the world – BME will have eight emulsion plants in the region by the end of the first quarter of 2019, after it commissions a new plant in the Ivory Coast – which will be dedicated to serving a new blasting project that BME has been awarded in the country.

BME has renewed its customer service approach locally, regionally and globally to better understand and assist its customers fulfilling their needs, says Keenan, who believes that the establishment of regional offices will assist in doing just that.

While BME has been awarded new contracts in South Africa, the concern is that the settling of the Mining Charter has not brought in any further direct foreign investment, which is concerning.

“The challenges I see in the South African market going forward is therefore around direct foreign investment, says Keenan.

Having already invested significantly into automating its manufacturing process, BME will continue to do so and will also focus on miniaturising its assembly systems in future.

Having also embraced digitilisation within the organisation over the past four years to improve the “infrastructure” of the business, BME has laid a solid foundation on which to propel the company forward in this digitally-connected age.

In doing so, BME will be focused on baselining all of its technologies currently in use in the field in 2019 to determine whether the technology platforms can be improved to raise the level of integration between BME’S several software systems.

The company will also improve the quality of the software programming as well as its look and feel for the end-user, says Keenan.

“We believe that if we want to play in this market going forward, we have to be innovative in our approach and thinking around technology,” says Keenan.