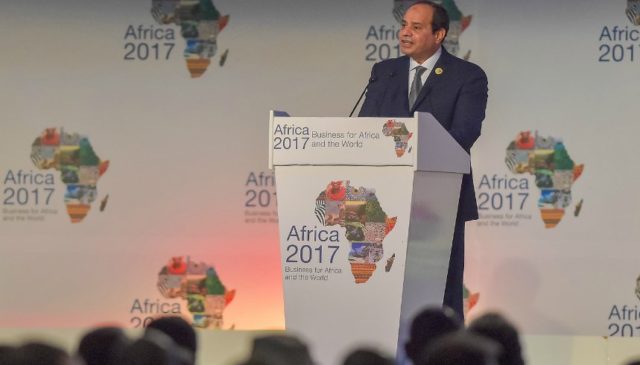 The Africa 2017 Forum has wrapped up in the Egyptian resort city of Sharm el Sheikh with a clear message of intent from President Al Sisi to bring Africa closer together.

The Heads of State stressed on the need for self-reliance and domestic resource mobilization.

The event offered business owners with an opportunity to meet investors, engage with political leaders and policy makers and explore new ideas to improve business environment across the continent.

In two private round-tables held on the sidelines of the event that the President held alongside other African heads of state and business leaders from Egypt and the rest of the continent, it was said that Al Sisi would do whatever he could to bring the continent together, both politically and economically.

The Forum had a strong focus on increasing intra-Africa trade, inclusive growth and stronger China-Africa cooperation, especially in terms of technology transfer.

During the event, Egypt also has signed a deal with the World Bank for a USD $1.15 billion development policy loan to fund the government’s plan to boost economy.

The final day of the Forum focused on industrial revolution for Africa and China-Africa economic relations.

She said the relationship was moving on from resources to partnerships with African countries but they needed to be clear about what they wanted from China.

She said 85 million jobs were likely to be exported from China in the next few years as labor costs increased in that country and Africa was well placed to attract them.

“If Africa can capture those jobs they can enjoy the same economic transformation China had.”

However, Carlos Lopes, Former Executive Secretary, UNECA, and Professor, Graduate School of Development Policy and Practice, University of Cape Town, Guinea-Bissau, said it was not inevitable that the jobs would migrate to Africa.

He warned that many jobs that could move out of China could be replaced by robots and automation, not Africans, and that other regions would also compete for the kind of jobs that Africa seeks – those at the lower end of the value chain. “A few African countries will make it, but not all,” he said.

“This huge move to get jobs can be elusive if we are not fast enough in creating opportunities. The window is closing very fast. We need to move quickly and do so in a way that is commensurate with the interests of China’s strategy.”

The three-day event , organised by Egypt’s Ministry of Investment and International Cooperation and the COMESA Regional Investment Agency (RIA), saw over 2 000 delegates from 75 countries attend the Forum.

Minister of Investment and International Cooperation Sahar Nasr said that the forum’s sessions offered a chance to exchange expertise and showcase investment opportunities in Egypt and Africa.