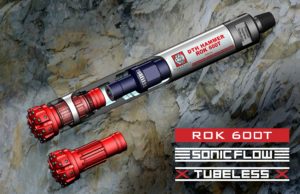 The new T hammer line will be officially unveiled to the European market at the upcoming INTERMAT exhibition held in Paris, France in April 2015.

This new addition to Rockmore’s existing broad range of DTH hammers is a breakthrough for DTH drilling technology for mining, construction, and water-well applications.  In addition to its ultra high performance features, the new T Series design hammers utilise drill bits with standard shank connections that no longer require plastic parts commonly known as Blow Tubes or Foot Valves.  The elimination of this plastic part associated with the drill bit offers various technical and economical advantages.

“We recognised a trending demand in the DTH drilling sector for a high performance DTH tool that could utilize industry standard drill bits without plastic components in order to increase reliability yet not compromise drilling efficiency,“ comments Pejman Eghdami, Executive Vice President of Rockmore International.

The new T Series DTH hammer design is the result of extensive research, development, and field testing.  The T Series is “tubeless”, as the name suggests (utilising bits without plastic Blow Tubes), and achieves the goal of using industry bit shank connections, but without the plastic component imbedded in the bit.

Although the “tubeless” DTH hammer has been offered before, drilling performance was often compromised when designed to operate with an industry standard bit shank.  In addition, other manufacturers have introduced DTH hammers that utilise bits without a plastic component, but such DTH bits are proprietary in design, which limit their availability.

“With our emerging T class DTH hammers, we are offering the drilling community a balanced solution of improved reliability without compromising any drilling performance.   And impressively, we have achieved this by incorporating standard industry shank connections into the overall design concept,” states Eghdami.

There are clear economical advantages of eliminating the traditional plastic components from the bit shank section.  Blow Tube / Foot Valve breakages on DTH bits during drilling operations are catastrophic since the hammer will cease to function immediately.

This is particularly damaging to drill time efficiency if such interruptions occur in deep-hole applications, requiring the hammer to be retrieved out of the hole for bit replacement.  The T Series hammers will alleviate such costly down time by elimination of the plastic bit component that is susceptible to breakages.

The ROK 600T is a six inch class model with high performance drilling characteristics rated for drilling 6.1” to 7.0” (155  to 178mm) diameter holes for blast hole applications in mining and construction.  It is also suitable for water well drilling since it exhibits good in-hole flushing which is necessary to evacuate rock chips in deep applications.

As a T Series design feature, the ROK 600T accepts the industry established bit shank model QL60, but with the Blow Tube / Foot Valve removed.  Such standard bits are readily available from established supply channels in the mining, construction, and water-well markets.  The corresponding bit connection for this hammer is designated by Rockmore as QL6T, which has an identical shank design to the QL60, but without the Blow Tube / Foot Valve.

As with all of Rockmore’s DTH hammers, the new ROK 600T takes full advantage of Rockmore’s patented SonicFlow technology, which optimises airflow by simplifying and streamlining the air paths to minimize backflow and turbulence, thus delivering more energy to the piston.  Field testing of the SonicFlow design was determined to result in faster penetration rates and greater overall DTH hammer efficiency.

Rockmore International is a global manufacturer of rock drilling tools, serving the mining, construction, and water-well sectors for more than 65 years.

Chamber of Mines Roger Baxter appointed new CEO from May ’15