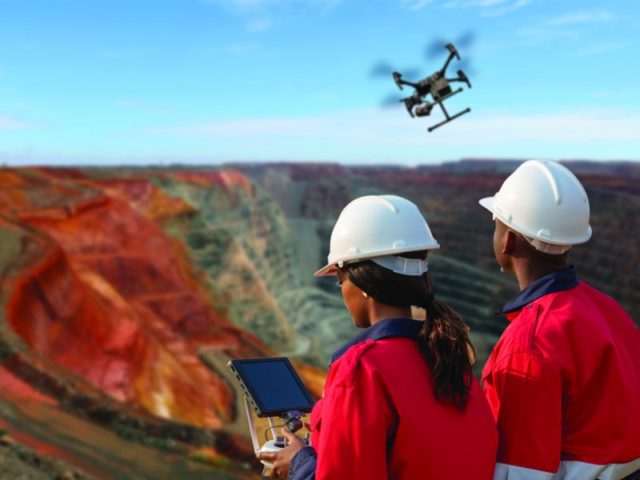 At this year’s Investing in Africa Mining Indaba, drone service provider Rocketmine was named one of the four hottest start-ups in the African mining industry.

GERARD PETER spoke to MD CHRIS CLARK about how the company is contributing to increasing productivity and safety at current mining operations as well as helping to shape the mines of the future.

Founded in 2013 and headquartered in Johannesburg, Rocketmine was one of the first companies in South Africa to be granted a commercial drone licence.

In fact, Clark says that Rocketmine is actually an aviation company, except it doesn’t transport people; it transports data.

Today, it services mines throughout continent including Nigeria, Namibia and Ghana and has a client base that includes Exxaro, Rio Tinto, Glencore and South32.

What has brought on Rocketmine’s ongoing success?

For starters, Clark points out that his company offers a niche service – regular survey flights that provide fast and accurate data to mine operators.

He explains: “Traditional mine surveys comprised a manned aircraft flying over a mine twice a month. That gave mine operator 24 data collection point a year. In addition, because everything was paper based, it would take up to 10 days for surveyors to provide this data to mines.

“Our drones, operated by Civil Aviation Authority licensed pilots, use photography and mapping software that enable us to collect up to 200 data points a month – the information is available on the same day as a flight.

“So whether a mine is in the planning or operational stage, we ensure that our clients are able to meet their deadlines and productivity targets.”

An eye on profitability

To date, Rocketmine has been instrumental in ensuring that mining operations are optimised. A case in point is Exxaro’s Grootegeluk mine in Limpopo. The mine is Exxaro’s largest opencast mine in the southern hemisphere.

This particular site inhabits various hazards and dangers to the surveyors.

“Our survey and mapping solution gets surveyors out of dangerous areas to increase safety and data turnaround time,” explains Clark.

“What’s more, we are providing data on progress on each 12 hourly shift. This ensures that there can be realtime planning and execution to improve efficiency and production on a shift-by-shift basis.”

Another project that Rocketmine is involved in is Rio Tinto’s Rössing Uranium in Nambia. As a major supplier of uranium oxide to the global market, the mine has to achieve the best possible grade of uranium.

Rocketmine is assisting in this process by providing regular and accurate date about stockpile movements at the mine.

Clark explains that traditional methods of stockpile monitoring are not only time consuming but can also be inaccurate.

“Also, it could turn out that particular stockpile is not where paper-based documents say it is – in fact, it could very well have been shipped off to a client earlier.

“We are able to provide an orthophotograph [satellite imagery that is geometrically corrected and can be used in the same manner as a map] with accurate locations of stockpiles. By using GPS coordinates, it is now much easier to identify the movement of a particular stockpile,” Clark states.

Shaping the mine of the future

Perhaps one of the most exciting projects that Rocketmine is involved in on the continent is the Belfast mine in Mpumalanga. Operated by Exxaro, it is the first mine in Africa that will have a digital twin – a complete digital replica of the mine.

This allows Exxaro and its contractors to connect to and manage operations from anywhere. Also, maintenance teams will be connected to machinery to analyse and pick up problems early, resulting in reduced downtime.

“Currently, Exxaro relies on our services to ensure that construction of the mine is on schedule,” he adds.

Clark likens the evolution of mine surveying to that of cellphone networks.

“Progressing from GSM in the beginning to LTE and now 5G networks, we are now able to create entire smart cities.

“These technological advancements have enabled Rocketmine to create a mining surveying solution that is faster, accurate and more reliable than traditional data capturing methods, not to mention more cost-effective and smarter, he concludes.