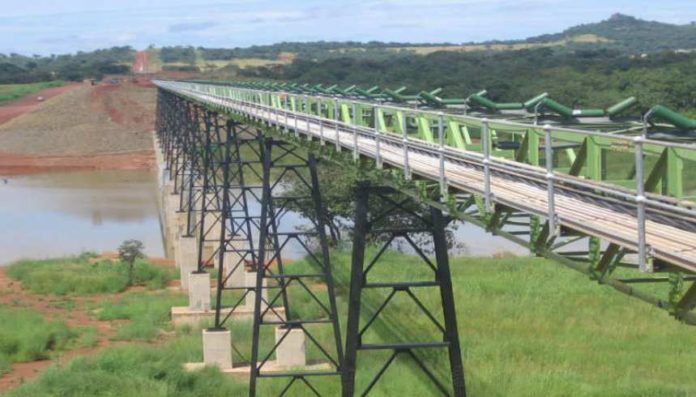 “Interestingly, we started delivering and growing our processing skills through our materials handling capabilities: more specifically our front-end comminution and conveying circuit designs, which in our early days were largely for heap leach operations. This also led to the design of our own proprietary range of heap leach equipment: specifically mobile heap leach stacking equipment and agglomeration drums, which remain a core offering today.”

As a result of this competence, SENET acquired the full heap leach equipment supply contract (Phase 1 in 1997 and Phase 2 in 1999 ) for AngloGold Ashanti’s Siguiri operation in Guinea, which ultimately led to SENET’s involvement and successful completion in 2003 of its first major process plant – a 10 Mtpa carbon-in-pulp (CIP) project. SENET went on to complete several impressive and large scale materials handling projects including the detailed design, procurement, fabrication, erection and commissioning of nine new 10 000 tph overland stockyard stacking/reclaiming conveyors between 2003 and 2006 at the Saldanha iron ore export facility.

“Despite our current successes and ever-growing track record in delivering process plants in the mining sector, we have never moved away from or lost our core, predominantly turnkey, materials handling skill sets. Consequently SENET has an in-house department comprising highly competent and experienced materials handling technical and mechanical experts. Importantly, it still constitutes relevant portions of work required to execute our process plants as well,” Smit highlights.

Thus, SENET is fully equipped to deliver complete, large-scale materials handling packages to clients across Africa and beyond, together with the flexibility to offer EPCM or turnkey projects, customised to the client’s specific requirements.

In addition to the successful completion of a 9 Mtpa iron ore materials handling plant for Kumba Iron Ore’s Sishen project in the Northern Cape in late 2010, SENET was responsible for the delivery of a massive off -shore conveyor package project in the United Arab Emirates between 2009 and 2013.

This included design, procurement, fabrication, erection assistance and commissioning of both Phase 1 and Phase 2 for Emirates Aluminium Company’s smelter complex. It comprised a series of interplant conveyors to transfer 900 tph of alumina from the quayside to storage silos situated within the main plant. The conveyor system was comprised of three conveyors carrying material for a total distance of 5 334 m; and included three transfer towers, dust collectors, and a fully automated sampling building.

The first 675 m long conveyor interfaced with two travelling ship unloaders and included a roof sealing belt to maintain an enclosed structure. The second 4 200 m long conveyor negotiated a distance of 1 640 m alongside the causeway from the quayside and was elevated above the sea by means of supports placed in the sea and spaced at 40 m intervals. The fi nal conveyor covered a distance of 600 m and included a 220 m horizontally curved section, thereby eliminating the need for an additional transfer point.

Facebook
Twitter
Linkedin
Previous articleAmplats sells interests in Union mine and MASA Chrome for R6.4 billion
Next articleMoving forward – Using new technology as a means to modernise the industry

Lead. Who says this battery metal has gone flat?