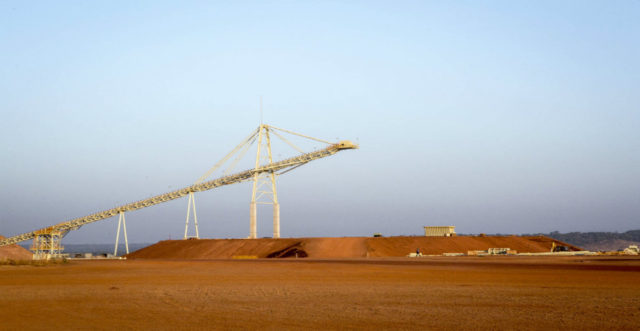 1 October 2017 will celebrate the official production start-up at international gold miner B2Gold Corp.’s (B2Gold) Fekola project in Mali. Not only is this operation destined to be the company’s largest gold producing mine, but will also boast one of the lowest cost margins within the operating mine portfolio, Fekola general manager RANDY REICHERT tells LAURA CORNISH.

Not only will B2Gold bring its US$395 million Fekola project on stream two months ahead of the original schedule (October as opposed to December 2017), it will further be ready to ramp up towards an expanded production profile of 5 Mpta ROM throughput, as opposed to 4 Mtpa. “In bringing our production forward we also anticipate producing about 50 000 oz of gold in the 2017 year still,” says Reichert, who attributes the successful ramp up in construction to a dedicated Mali workforce and a fine-tuned construction management team, many of whom were responsible for the successful delivery of B2Gold’s Otjikoto project in Namibia.

At full production, Fekola will contribute between 350 000 oz and 400 000 oz (at $418/oz) to the total B2Gold production profile, in turn making it the company’s largest mine and increasing total gold output from across its mining operations located in various parts of the world, from around 500 000 ozpa to just over 900 000 ozpa. It is also expected to be a low-cost producer and should enable the company to significantly reduce its longer term cash operating costs per ounce and all-in-sustaining-cost (AISC) per ounce.

Fekola at a glance

Situated on the western edge of Mali, bordering Senegal, the influx of equipment to site has been a logistically smooth process – because a 40 km access road linking the mine to a main highway in country was completed in 2015.

The Fekola operation – 90% owned by B2Gold and 10% owned by the Mali government (the government has the option of purchasing a second 10% at fair market value) – will be a large-scale open pit mine generating 32 Mtpa of ore and waste material. At a throughput capacity of 5 Mtpa, the process plant will produce on average between 350 000 and 400 000 ozpa of gold for the first seven years.

In June 2016 B2Gold announced it would be expanding the throughput at the Fekola mine from 4 Mtpa to 5 Mtpa – a decision determined by basic project economics and drill results near surface and underground below the main pit revealing the potential for more ore. The decision also followed an optimised feasibility study and environmental and social impact study which accommodated the uplift in production and established that the Fekola mine could reach its higher throughput in its initial years for relatively low additional capital cost.

In August the company decided to proceed with the expansion and approved an $18 million budget for additional items including a pebble crusher, additional leach tank and additional generator. “It is on track to be commissioned in conjunction with the main plant commissioning,” says Reichert.

At the given production rates and current known reserves and resources, Fekola will comfortably produce gold for about nine and a half years at a grade of 2.35 g/t, although this will average a higher 2.5 g/t for the first six years of lifespan.

“There are a number of regional prospects within the area that B2Gold has identifi ed as good potential targets which could extend Fekola’s lifespan,” Reichert mentions.

Metso supplied hardware, software and services for an AudioMill system with one microphone for one unidirectional SAG mill and a VisioRock Compact system with one camera. The technical objective of the AudioMill system is to generate information about the sound level of the SAG mill in frequency bands, filter unwanted noises, detect and quantify cyclic sound variations and estimate sound level of impacts on SAG mill liners. VisioRock technology is a online measurement system of particle size distribution, shape and other properties of rocks or ore on a conveyor belt. The technology vastly optimises performance.

Construction of the Fekola mine is progressing well, on schedule and on budget. Pit pre-stripping has commenced ahead of schedule from the south end of the pit in preparation for mining activity start-up and ore stockpiling has followed suit – ready to ensure it is capable of the expanded volumes required for the plant. At the end of February overall construction was 70% complete. Australia-based engineering firm Lycopodium is responsible for engineering the process plant.

Discussing plant circuitry and other project specifics, Reichert breaks down the separate components:

• Primary crusher and gyratory crusher installation nearing completion; • Stacker conveyor for the course stockpile complete;
• Reclaim conveyor leading to the SAG mill complete;
• 90% of concrete works complete;
• Ball and SAG mill installations currently underway;
• Mechanical components, cyclones and screens installed;
• Leach tanks installation complete, excluding additional expansion tank;
• Installation of carbon-in-pulp (CIP) tanks nearing completion;
• Gold room and reagent storage area currently under construction;
• Construction of the tailings storage facility (TSF) and water embankments 100% complete;
• Lining of the tailings facility is 40% complete and will be finished by May;
• Gold room and reagent storage area construction is well underway;
• 60 MW heavy fuel oil powerhouse construction remains on schedule for a June 2017 commencement of commissioning;
• Grade control for the ore zones has commenced and the laboratory on site is under construction (expected to start up in Q2, 2017); and
• Commissioning team has arrived at site and begun hiring and training the lab operators and preparing training modules for mill operators to be hired in Q3, 2017.

Reichert further notes that all of the support infrastructure – office  buildings, warehouses, maintenance shops – are in the process of being built as well.

While any new mining project development encounters challenges along its journey to production, especially in more remote regions such as Mali, Reichert says Fekola’s construction has been an extremely smooth process – so much so that it is ahead of schedule, as mentioned.

At the time of the interview with Reichert in early March, the project had also celebrated 295 days without a lost time incident.

“We are also working primarily with a local workforce which has exceeded our expectations because they are happy to see a new mine development and gain exposure to job opportunities,” the general manager notes. There are currently 750 nationals employed on site – largely from villages located in close proximity to the mine. Contractors currently employ another 500 nationals for construction and support services.

B2Gold will apply the owner operator model to the Fekola project, as it has done with all its other mining operations. “Local, internal employment is a company philosophy which we believe gives us full control over our mines. With the correct training and guidance, it is easy to pursue the local employment route.” When the mine is fully operational it will employ 884 employees – 575 at the mine and another 115 at the process plant with the balance employed in general administration positions, at the laboratory and power plant.

The company has also approved a plan to relocate the village of Fadougou, located adjacent to the main Fekola pit.

This decision was not made based on a requirement in the construction permit but on extensive stakeholder engagement with the local population. Relocation of the village will be completed in accordance with a resettlement action plan that was completed by an independent consultant in consultation with all stakeholders.

The RAP has been submitted to the appropriate Malian authorities and B2Gold is currently in the process of acquiring the land necessary for relocation. It is anticipated that the relocation process will take two years to complete. Total estimated relocation costs are approximately $20 million, incurred in 2016 and 2017.

2018 THE YEAR OF FULL PRODUCTION

For 2018, with the planned first full-year of production from Fekola (based on current assumptions and updates to B2Gold’s long-term mine plans), the company’s forecast consolidated cash operating costs per ounce and AISC per ounce are expected to decrease in 2018 (compared to 2017) and be comparable to the company’s 2016 cost guidance ranges (of $500 to $535 per ounce for cash operating costs and $780 to $810 per ounce for AISC).