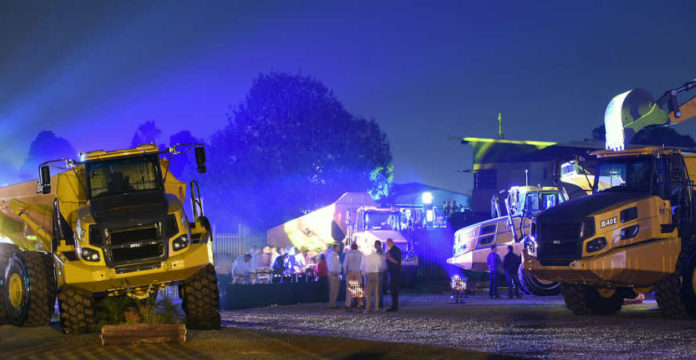 Incorporating the latest in ADT design and technology, the Bell E-series large trucks are the culmination of three and a half years of development and testing – as well as 35 years of experience in ADT design and manufacturing – combined with a research and development investment of R800 million over seven years, says Bell Equipment group chief executive Gary Bell. The E-series range was initially launched three years ago with the smaller B25E and B30E. The large trucks add five new models to the range, with the launch of the B35E, B40E, B45E, B50E and the innovative 4×4 crossover concept, the B60E.

The E-series is an evolution on the D-series range, which has set industry standards and led ADT innovations for over a decade, explains Bell.

“We chose to go with an evolutionary type of process with the E-series to bring durable, reliable products to the market. As a benchmark, the development and testing of this range was about 10 times more than what was spent on our D-series,” he says. Bell Equipment does not rely on its brand name to market its machines but instead relies on the performance of its products, Bell points out. “Our E-series trucks are world class machines capable of taking on any of our competitors, anywhere in the world.”

Improving along with the industry’s needs

While the D-series has a proven reputation for good performance, low lifetime operating cost and reliability, Bell explains that the time had come for the company to make advancements in terms of performance and improved capacity as well as deal with emissions requirements, particularly for the company’s northern hemisphere markets.

“We’ve been able to improve the durability and reliability of our trucks; and our three years of experience with our E-series small trucks has shown that the reliability factor that has been built into the trucks has taken us a good way forward from the D-series,” notes Bell.

Bell Equipment has also incorporated more intelligence into the vehicles. The systems and information that the company now offers is more sophisticated than in the past and paves the way for more autonomous control of the trucks in the future.

In terms of other changes incorporated into the E-series large trucks, improved safety features are more advanced than what the rest of the market has at this time and a number of other value-added electronic features improve the ADTs operating costs and reliability.

Limited production of the B60E is underway with the first shipments to the United States having already left. Unique in the large truck range is the 60 tBell B60E, which the company believes has“broken the mould” in terms of the things that should be done with an articulated truck.

Bell explains that while the Bell B60E is able to run alongside rigid trucks within the 60 t to 80 t class, the concept is ideally The Bell B60E features 4×4 traction, oscillation tube and retardation, enabling it to cope in rainy weather with compromised underfoot conditions.The Bell E-series large trucks are the culmination of three and a half years of development and testing 45 targeted for mines, quarries and bulk earthworks that experience conditions that rigid dump trucks cannot safely cope with, such as rainy periods which compromise underfoot conditions.

When traditional 4×2 rigids can no longer operate, the 4×4-traction, oscillation tube and retardation characteristics of the Bell B60E pay off by keeping production going, which is a huge opportunity for many customers.The concept of the B60E is something that the company believes it could scale, and reveals that further developments on this concept can be expected in the years ahead.

When comparing the E-series to the outgoing D-series, all the large trucks have a useful increase in power with the new engine platform. During comparative testing between the B40E and the B40D it was found that, taking into account all of the variables, the B40E will deliver a 7% or more lower-cost per ton to Bell customers than the B40D. In terms of transmission, the move to a 7-speed Allison transmission across the range, with the exception of the B35E, effectively delivers better performance due to the smaller steps between gear ratios, which keeps the engine at optimum revs more consistently. In terms of axles, the brake system and gears of the Bell D-series range of ADTs shared common oil in the axle. With the E-series large trucks, the engineers opted to use two separate and commonly available oils for the brakes and the gears in the axle. In terms of the cab, the large truck shares the same cab as its small truck counterparts due to the positive feedback from customers in terms of operation and ergonomics. Some of the added features in the large trucks are the addition of electronic bonnet opening, a simplified interface, an Isringhausen seat for ride comfort and a full glass door, for enhanced visibility. Overall, Bell Equipment has looked critically at what needed to be included in the upgrade, and focused only on delivering real value added improvements in terms of reduced cost per ton and safety, without compromising the platform that has served well for the last 15 years,“ says Gary Bell.