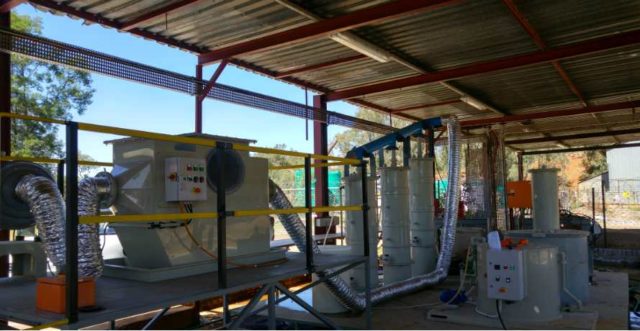 Treated mine-impacted water was highlighted as a key commodity for use in the agricultural sector during the first, annual Southern African Institute of Mining and Metallurgy (SAIMM) and Mining Metallurgical Manager’s Association (MMMA) Water 2017 Conference. As water is an increasingly scarce resource in light of on-going droughts and stringent water use requirements, TAMSYN GREWAR, senior scientist within the Biotechnology Division of South Africa’s state-owned minerals research council, Mintek, highlighted the organisation’s efforts at refining a specialist technology for such purposes. CHANTELLE KOTZE writes.

In a bid to conserve the increasingly scarce resource, Mintek is currently developing and testing solutions to treat mine-impacted water, as well as acid mine drainage (AMD).

Speaking on the topic of How South Africa’s acid mine drainage dilemma can positively impact the water-energy-food nexus, Grewar stressed that South Africa is a water scarce country, pointing out that it is one of the top 30 driest countries in the world. This highlights the value of water and the need for it to be treated with greater care, especially by large water users, such as the mining industry.

“Pollution, drought and population growth are all risks to our water resources,” says Grewar, adding that there is now a strong economic driver prompting mining companies to consider mine-impacted water treatment owing to the already strained water resources in the country.

This technology can be used as a long-term sustainable solution for the treatment of mine-impacted water, producing a water of suitable quality to be used by the agricultural industry for irrigating crops. Further treatment of this BSR treated water could be used for livestock and can also be upgraded to potable water for human consumption.

Status quo in mine water treatment

Existing and currently used methods of treating AMD are primarily short-term, emergency solutions, used in cases where AMD is already decanting from mine shafts (as is the case within the Witwatersrand Basin) and polluting surface water courses: thus emphasising the need for a more long-term sustainable solution.

Lime precipitation/HDS treatment has been adopted by the Department of Water and Sanitation and is currently in use across the Witwatersrand’s Western, Central and Eastern Basins as a means to correct the pH of the water and remove the heavy metals in the water, in turn improving the quality of the water.

Grewar states, however, that while this treatment corrects the pH of the water, it does produce large volumes of sludge, with the effluent containing high concentrations of sulphate, well above the levels allowable for discharge.

Another option being adopted as a means to treat mine impacted water is the RO solution,which can be used to produce potable water. Reverse osmosis, however, produces large volumes of brine, thereby resulting in a number of issues in terms of disposal of waste products, Grewar notes.

The case for active and passive biological sulphate reduction technology

In light of the downsides of the available technologies for the treatment of mine impacted water, including high operating costs and effluent discharge problems, Mintek embarked on and is pursuing the development and piloting of BSR technology. Despite being around since the 1980s, Grewar says BSR was not widely adopted because of a number of barriers to entry, most specifically owing to high substrate costs.

The active BSR technology being tested by Mintek uses a readily available and cheap waste stream, as a carbon source for the microbes, to effectively treat mine effluent.

Employing an anaerobic process to reduce sulphate and base metal concentrations, a by-product of alkalinity is produced in the form of bicarbonate. This is used to neutralise the effluent, thereby improving its quality, with minimal environmental impact while maintaining cost efficiency.

Through their research, Grewar and the rest of the team at Mintek were able to identify inexpensive and readily-available substrate materials that would help lower the plant’s operating costs – one being crude glycerol.

“The crude glycerol substrate produces an effi ciency of sulphate removal greater than 90% from the AMD,” she notes, adding that the crude glycerol is a waste product from biodiesel production, which makes it cheap and abundant.

The benefit of BSR technology is that it produces significantly less solid waste, when compared to chemical precipitation methods. “BSR is highly suitable for treatment of mine-impacted water, specifi cally from coal and gold mining industries,” says Grewar.

An active BSR pilot plant, which uses the crude glycerol substrate, has been commissioned at a site in Randfontein. At a residence time of three days, the active BSR pilot plant managed to neutralise the effluent to a state in which it met water regulations for agricultural use to irrigate crops.

Mintek is also researching the passive use of BSR, which uses a complex substrate made of wood chips, wood shavings, cow manure and hay.

Mintek is currently using a laboratory-based, multistage continuously-operated column plant to run trial tests of the passive technology, with plans to commission a pilot plant at a coal mine in eMalahleni, later this year.

Grewar highlights that passive BSR is suitable for use in applications post mine closure, and could be a viable option for treatment of AMD at disused or decommissioned mines.

Tests to date have proven that the passive BSR plant has been able to neutralise effl uent with a reduction of sulphates greater than 97%. The effluent from this plant is also suitable for crop irrigation.

Tests performed on Mintek’s two pilot plants have to date resulted in treated water being produced, which meets the basic standards that allow it to be used for crop irrigation.