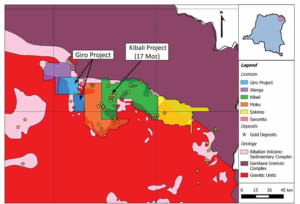 Since discovering the 17 Moz Kibali group of deposits, which has successfully been developed into the Kibali mine by Randgold Resources and AngloGold Ashanti, gold explorer Burey Gold is trying to repeat the success along the same gold belt with its Giro project.

Well on its way to meeting its 2015 production guidance of 600 000 ozpa, Kibali is only one of many discoveries made by Burey Gold’s team in the Democratic Republic of Congo (DRC). The company has in fact become recognised for its ability to discover some of the DRC’s most prolifi c deposits.

In 2004 Burey Gold’s management started up Tiger Resources, which is today a copper producer producing 25 000 tpa of copper from its Kipoi copper project, as well as assets now owned by gold exploration and resource development company Kilo Goldmines. In 2011 the Burey Gold team also discovered the Bisie tin project, which is today one of the highest grade tin projects in the world.

Having historically explored in the DRC in the late 1990s, Eckhof and his team returned to the country in 2002 and was exploring for gold in the north east of the country when it discovered Kibali, with its junior resource company Moto Goldmines. Burey then moved onto its next exploration project – Giro. After consolidating the historical data of the Giro gold project 18 month ago, Burey Gold commenced active exploration at Giro, with one of the first intercepts grading at 2.7 g/t from 0 m to 96 m, Eckhof notes.

Located in the north east Oriental province of the DRC, the Giro project comprises two exploitation permits, less than 30 km west of the Kibali gold deposits, covering 610 km2 of prospective ground within the Kilo-Moto Belt, a significant underexplored greenstone belt.

A major north west trending structural corridor transgresses both tenements over at least 30 km. The Giro deposits lie within this corridor while a number of extensive alluvial workings were identified to the north within the structural corridor. Primary and alluvial gold was mined from two main areas, the Giro and Tora areas, during Belgian rule and today these areas are mined extensively by artisanal miners. At least three additional extensive alluvial workings occur within the project area, confi rming the potential for new discovery of primary…