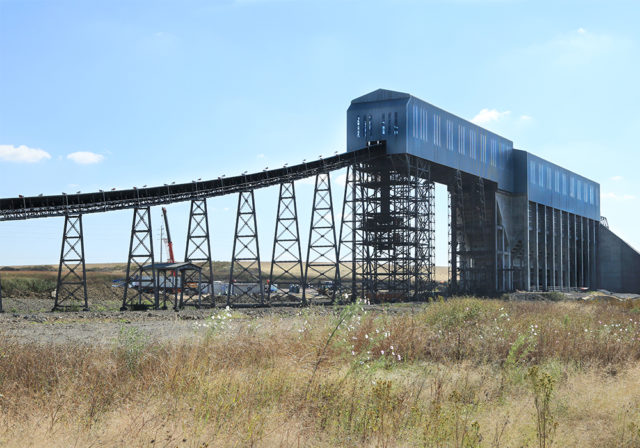 Winding its way across nearly 30 km of South Africa’s veld from Sasol Mining’s Impumelelo coal mine to Sasol’s Secunda Synfuels complex, the ELB designed and built conveyor system is testimony to the power of innovative engineering.

ELB Engineering Services, part of the ELB group of companies, handed over the conveyor system to the client for beneficial use, on 28 October 2015, marking the successful conclusion to a complex and challenging system that was distinguished by its number of firsts.

Impumelelo in South Africa’s Mpumalanga province is one of three new mines that Sasol Mining has been developing as part of its mine-replacement project.

The engineering design, procurement and construction contract covered the design and supply of a system to transport coal from the mine to the screening plant at Sasol’s Secunda complex. ELB was also responsible for the mechanical, structural, electrical and civil engineering (excluding earthworks for the Impumelelo mine and overland conveyor) for the entire conveying system.

The system includes a total of seven conveyors, the outlet to the underground bunker at Impumelelo mine and two storage bunkers.

ELB’s groundbreaking innovations were key to its successful contract bid, which included not only the ultra-long singleflight conveyor but also a novel 15 000 t storage bunker built from precast sections to save construction time.

As part of the bid proposal and to convince Sasol Mining of the integrity of the solution, ELB worked on simulations with its exclusive technology partner, Conveyor Dynamics Incorporated (CDI), a company based in the USA, and a leader in large overland conveyors. Together, the two companies supplied the project with rubber viscoelastic technology, improved belt power and strength efficiencies, belt-life extension technology, as well as dynamic conveyor analysis. So accurate were the theoretical design and engineering calculations that the power consumption of the completed overland conveyor deviated by only some 5%.

With Impumelelo situated about 30 km from Sasol’s Secunda complex, the system designed by ELB had to navigate a complex topography between the mine and the screening plant, with the conveyor negotiating both horizontal and vertical curves, as well as complex curves in both planes simultaneously.

The system commences 220 m underground at the mine’s underground bunker, where ELB designed the outlet, involving two feeders designed to deliver 3 500 tph and a 1 km long conveyor inclined at 17°.

At the top of the incline, the coal is transferred into the 15 000 t storage bunker via a tripper conveyor. The conveyor is designed such that the structure bows to ground level to enable Sasol Mining to bring in its crushing and screening plant at a later stage.

The storage bunker, built from precast sections cast on site, is some 26 m high, 20 m wide and 86 m long. This is by any standards a very large bunker, with one panel alone being some 7 m long.

From the base of this bunker, a reclaim conveyor reclaims the coal for feeding onto the 26.9 km long single-flight overland conveyor. Forming part of the reclaim conveyor system is a sampling plant and two magnets to remove foreign metallic objects, with each magnet weighing 33.7 t.

At the end of its journey, the overland conveyor has the option to feed into the Sasol stockyard (via the plant side reclaim conveyor) or a 4 000 t bunker (via the Sasol Coal Supply (SCS) tripper conveyor), which provides a surge facility to allow stacker changes in flight. Mounted on top of the structure is the SCS tripper conveyor with a moving head design. It extracts coal from the 4 000 t bunker for distribution to the existing SCS screening plant.

While the 26.9 km long single flight conveyor was the ideal solution for the cost-effective and efficient transport of coal that Impumelelo required, engineering this conveyor required that a number of design hurdles had to be overcome.

For example, to prevent stretching and breaking of the 56 km long steel cord belt, the starting, operation and stopping of the conveyor had to be managed carefully. Powering the belt are 2 x 1 000 kW drives at the head end with 2 x 1 000 kW and 1 x 450 kW intermediate drives halfway along its length and a 1 x 450 kW tail drive. At the intermediate point (booster station), a fixed tripper and chute arrangement conveys the coal over the intermediate drive point.

The 1.2 m wide belt travels up to 6.54 m/s, carrying a load of between 2 000 and 2 400 tph. To keep the belt moving smoothly, some 27 978 rollers were installed at a spacing of 4.5 m on the carry side and 9 m on the return side, as opposed to the more generally acceptable 3 m carry and 6 m return, resulting in significant capex and opex savings.

To reduce drag, lower viscosity grease than is typically supplied by the idler bearing manufacturers was specified. The idlers consist of a steel inner shell with a polypropylene outer cover which reduces the idler noise and makes it easier to achieve a low TIR (total indicated runout), making the idler rolls easier to turn and resulting in reduced vibration.

Dynamic analysis was used to assess the start-up and shut-down sequences and eliminate shock or dynamic waves acting along the length of the belt which could adversely affect the supporting steel structure.

When the belt is in operation, a sophisticated PLC, linked by fibre optics, controls and synchronises all three drive stations to minimize the stresses applied to the conveyor belt.

The belt pulling was without doubt the most visually impressive activity of the project. With the in-house expertise of a world renowned specialist available, the alignment of the single flight conveyor has an error of margin of less than 5 mm – possibly the straightest conveyor to be built.

With an individual mass of 36 t, 55 lengths of belt were pulled using a specially designed truck built on a crane base, taking approximately 40 minutes per conveyor belt pull to complete. The entire process took 46 days over a 96 day period, using a belt reeler that was 10 m high and stored 1 km of belting. There were five stations along the 26.9 km path.

As a long lead item, the belt was procured early on in the project and manufactured in China for delivery in 1 km lengths FOB to South Africa’s Port of Durban. Veyance Technologies, an international provider of Goodyear Engineered Products, was responsible for the manufacture and delivery of the plus 54.8 km of steel cord conveyor belting in multiple shipments. Each conveyor belt reel, which weighed 36 000 kg (36 t) and measured 3.76 m in height, 1.6 m in width and 6 m in length, was transported to site by Cascade Logistics, taking five days via a convoy of abnormal flat-bed trucks.

A trade-off between cost and time was an important consideration in the manufacture and transport of the belt as one belt splice takes up to 18 hours to complete. Therefore, aiming to minimise the number of splices while taking the logistics of transporting the belt into account, the belt was supplied in 1 000 m lengths, requiring 56 splices.

While Veyance Technologies has a plant in South Africa, the belt manufacturing was undertaken at its Chinabased manufacturing facility, both to accommodate ELB’s delivery schedule and in view of the China-based plant’s ability to produce significantly more than the South African plant. At project peak 52 ELB engineers, including drawing office staff , were focused on the project, with a labour force of 257 ELB and 372 sub-contractor personnel on site at peak construction. Safety first was a priority throughout the project with world class fi gures of more than 1.5 million LTI (lost time injury)-free hours being achieved. With 14 major safety audits by the client yielding no major fi ndings, ELB was the well-deserved recipient of a number of safety awards from Sasol.

With a project this size, the quantities of materials required careful logistics planning and scheduling, and included some 8 130 t of mechanical and structural materials, ±54 km of cables and 9440 t of concrete cubes. 14 cranes were deployed on site, with the largest being a 550 t crane. A highlight was the tandem lift of the throughout bridge using two cranes, of 440 t and 275 t respectively, to hoist the bridge onto the 15 000 t bunker.

Carrying through its innovative approach even to travelling and accommodation, ELB housed its site force in a containerised camp some 7 km away and negotiated with a local taxi association to provide transport to and from the site.

While the normal challenges of a project of this magnitude were complicated at times with cable theft of more than 10 km overall on the project, strikes and difficult working conditions posed by the presence of snakes, fog and 120 km/h strong winds, there were many lighter moments on site as well.

22 August 2015 saw the first coal being moved by the conveyor system out of mine, using a temporary tail end as only 700 m of the 1 km long decline conveyor could be installed. But, by late October 2015, the entire system was moving coal. What was once an innovative idea on paper became a fully functioning reality – an ultra-long, highly effi cient, low maintenance conveyor linking the Impumelelo mine to the Sasol Coal Supply (SCS) screening plant.

A plaque on the Sasol Coal Supply screening plant building in Secunda shows that it was built in 1980 by Edward L Bateman – highlighting the longevity and durability of ELB designs. “The Impumelelo conveyor system is testimony to much more – thinking out of the box, clever engineering design, advanced technologies and meticulous project execution – all attributes that clients have come to associate with ELB’, Manuel Marques, senior project manager for ELB Engineering Services, concludes. MRA