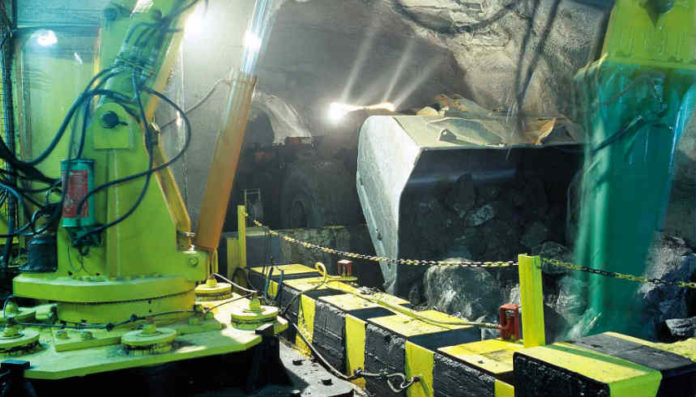 LSE-listed Petra Diamonds R4.2 billion C-Cut Phase 1 project – focused on breathing new life into a mine well over 100 years old – is entering the final leg of its journey. Having nearly completed all major development work, key focus is now being injected into ramping up production to reach nameplate capacity in 2019. A recent site visit to the project reveals a new state-of-the- art mine which incorporates modern infrastructure, equipment and processes designed to see Cullinan not only return to its heyday years but possibly surpass them, writes Laura Cornish.

Petra Diamonds’ plan to develop a new mine at Cullinan has been its vision since it acquired the asset from De Beers Consolidated Mines (DBCM) in 2008 as a going concern. Petra Diamonds owns 74% of Cullinan, with the remaining 26% held by the company’s BEE partners (The Itumeleng Petra Diamonds Employee Trust: 12% and Kago Diamonds: 14%). Today, six years since the C-Cut project fi rst commenced, the vision is materialising as the mine completes the last few outstanding infrastructure requirements necessary to see a fullscale production ramp-up commence which will take the mine to its nameplate capacity. R3.4 billion of the R4.2 billion has been spent placing the project well within budget allocation.

Until the C-Cut project started, Petra Diamonds’ production had been confi ned specifi cally to mining old, heavily diluted areas in the B Block which had been contributing signifi cantly to lower ROM grades. “This resource was in fact approaching depletion in 2016 and would have resulted in Cullinan’s closure,” says Andre Cloete, Petra Diamonds mining projects manager. “The C-Cut project has not only prevented closure, but provided access to an entirely fresh and untapped ore body that represents the start of a new life for the mine to at least 2030.”

Cullinan’s 5.7 ha C-Cut specifically entails the construction and development of an entire new block cave below the B Block on the western side of the mine’s ore body; providing access to un-mined, undiluted ore, which thereby enables a higher mined tonnage and significantly higher grade production profile. Cloete notes that there is a significant chance of an increased frequency in the recovery of “special diamonds” – with the increase in volumes of fresh diamond bearing ore. Thanks to the addition of a new process plant capable of handling harder ore and incorporating “gentle” recovery techniques, opportunities to minimise breakage whilst recovering these stones will be further improved.

“Every aspect of the new C-Cut mine has been considered; resulting in a truly modern, efficient and streamlined operation,” Cloete highlights. He is largely referring to the new ground handling system, which enables the higher volumes of material to be handled only four times once it is fed into the hoisting system, as opposed to the current 11 times. This will dramatically improve Cullinan’s operating costs.

“The priority now is to continue establishing more draw points across the new mine footprint – from which we will access the new ore (the fi rst draw points were already installed at the end of 2015).” This is the key requirement to meet the targeted mining capacity over the next two years. Each draw point will move the material down by 200 mm every day once operational. The total block cave height is 195m. Extraction occurs at 839 Level (or 839 m below surface).

Shaft sinking specialist Murray & Roberts Cementation was awarded the entire R1 billion shaft sinking contract (the largest project portion of the entire C-Cut project) in August 2012, as well as the development of two underground storage silos. Cloete highlights that Murray & Roberts Cementation’s ability to meet its deadlines and the effective collaboration between the Cullinan team and the Murray & Roberts Cementation team has been a contributing factor towards the success of the project. “We have proven that contractors and miners can work together successfully and deliver on deadline,” he reiterates. The team focused heavily on optimising project delivery by utilising its 380 employees’ (at peak) time effectively between project areas. “This, combined with the Cullinan team’s shaft sinking experience, played a major role in ensuring the project advanced smoothly,” Cloete highlights.

The company also facilitated engineering for the Koepe winder upgrades, which were completed in December 2014 and December 2015 respectively. “It has been a very successful project, and one that we are extremely proud of. It wasn’t without its challenges but having ensured we put ‘the right people’ on the job, we delivered the results both ourselves and the client wanted. It has been a good integration between owner and contractor from our perspective and overall a flagship achievement for Murray & Roberts Cementation,” says Murray & Roberts Cementation MD Daniel Grobler. “Projects like this are driven by leadership and this has been a well-run and well managed project,” he adds.

C-Cut Phase 2, or the eastern side of the Cullinan ore body, is not in the current mine plan but is already on Petra Diamonds’ short-term radar and planning around early stage development work to access the area is underway. “Ultimately, our vision will be to mine a combination of both the Eastern and Western side of the C Block.” Petra Diamonds has drilled the ore body to a depth of 1 500 m and at present includes reserve figures to a depth of 1 035 m. Cloete says it extends at depth and will likely be mined for well in excess of 50 years. MRA