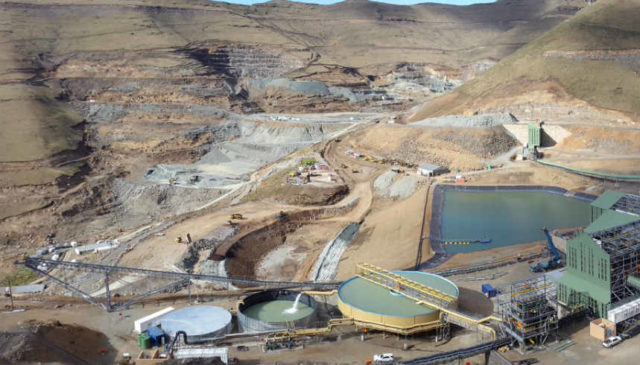 AIM-listed Firestone Diamonds’ 9.5 million carat (reserve) Liqhobong diamond mine in Lesotho is just one step away from production, with commissioning of the process plant in its final stages. Th is milestone marks the start of first kimberlite production, with full production ramp up expected to occur within the first six months, writes Chantelle Kotze.

Firestone Diamonds’ Liqhobong diamond mine in Lesotho expects to take its first commercially produced diamonds to market in January 2017.

Soon to join the short list of diamond producers in southern Africa, Liqhobong has entered the start-up phase, with all major construction activities on site now complete and commissioning of the processing plant well advanced.

“The first 90 000 t of ore from historic stockpiles generated during trial mining activities from July 2011 until October 2013 has been put through the plant as part of the wet commissioning phase and the company has begun mining the main pit kimberlite as it begins production activities in earnest,” says CEO Stuart Brown.

The Liqhobong diamond mine, located in the Maluti Mountains of northern Lesotho, is 75%-owned by Firestone Diamonds and 25% by the Government of the Kingdom of Lesotho and has exceptional and large stone potential with a high incidence of fancy yellow stones. The asset comprises a main kimberlite pipe – 8.5 ha in size; a satellite pipe of 1.6 ha; and associated dykes.

Erected in just under a year, the processing plant, which features a three-stage crushing circuit followed by conventional dense-media separation, as well as X-ray technology recovery, will be capable of treating 3.6 Mtpa of ore and producing 1 million carats per annum of diamonds at an average diamond resource grade of 27 cpht.

The primary aim of the plant is that it will enable Firestone to recover larger stones than those recovered by the pilot plant, enabling the company to fully exploit the exceptional and large stone potential that Liqhobong offers.

Brown says that tests on nine of its stones recovered during trial mining, including its largest unbroken stone – a 74 carat diamond – found the stones to be broken or damaged. The diamond damage tests revealed that the diamonds, if not damaged, would have potentially been between 100 carat and 200 carats, with two of the nine diamonds being larger than 200 carats.

Based on the findings, Firestone therefore designed and built the new processing plant with a much higher initial crushing gap of 150 mm to eliminate the potential of damaging diamonds, of sizes up to 400 carats.

“During the first 12 months of production the plant will initially be fed small amounts of ore as it ramps up to full production, in the region of 40 000 tpm, building up to 300 000 tpm over a ramp-up period of six months,” explains Brown.

Having commenced construction in July 2014, despite a slight delay construction completion has nearly been achieved. During this time Firestone Diamonds and its project team moved about 4.5 Mt of rock and earth on site during civil and earthworks alone and poured just over 7 800 m3 of concrete to create Liqhobong’s foundations.

About 10 000 m2 of buildings including plant offices and accommodation was established, requiring about 91 km of cabling and electrification. The final recovery and diamond sort house was the final item to be ticked off in the construction box.

Despite the significant progress made to date, Brown notes that there are still some operational risks in bringing the project into production, including the failure of major or critical equipment during commissioning, inclement weather that could delay the final construction as well as the completion of a second return water dam needed to store much needed process water ahead of the rainy season.

In November 2013, Firestone Diamonds secured $82.4 million worth of project debt finance from South African banking firm Absa Capital. In May 2014, the company announced it had raised an additional project financing package to build and commission Liqhobong, bringing the total funding to $222.4 million. In April 2015, the company also put in place a $15 million standby facility with mining-focused private equity firm Resource Capital Fund. The project remains within the original US$185.4 million budget, with $142 million having been spent by the end of the June 2016 quarter, and $34.4 million left to spend. This results in forecast headroom available to the company of approximately $9 million as at the end of December 2016, which does not include the standby facility of $15 million. MRA