In depth: Building solid labour relations alongside a world-class mine 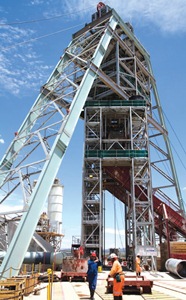 JSE-listed junior Wesizwe Platinum has made impressive strides over the course of 2014, despite the challenges faced by the platinum industry in South Africa. Most notably, the company remained operational throughout the year, even as the five month platinum strike drove most of the local sector to a halt, project executive Jacob Mothomogolo tells Vicky Sidler.

Although Wesizwe is not a revenue generating entity, remaining operational during the strike has meant that the company was not affected by standing time, which ultimately translates into money saved from standing time claims by contractors and also opportunity costs.

“This was purely due to how closely we engage our stakeholders in monthly stakeholder engagement forums, attended by community representatives who receive information about the project, its challenges, finances and opportunities. That has helped a lot in terms of creating a better understanding within the community. It is something we can really be proud of,” says Mothomogolo.

GOOD LABOUR RELATIONS IS GOOD BUSINESS PRACTICE
As the after-effects of the platinum strike started showing in many companies’ operational and financial reports, the industry in South Africa is busy revising plans and positioning. However, Wesizwe has re-emphasised the value it places on labour relations as well as the opportunity inherent in the restructuring of the local platinum industry.

“We are at an advantage in the sense that we are able to now absorb some of the skilled people who might have come into the market as a result of labour movement and restructuring in the industry,” Mothomogolo explains. “It is important for us to present ourselves as an employer of choice as we compete with the other big mining houses in the area.”

While the company is engaged in both internal and external training, Wesizwe is looking to employ as many as 30% of its workforce at its Bakubung platinum mine in Rustenburg from within a 50 km radius pool. In total, the mine expects to employ ….