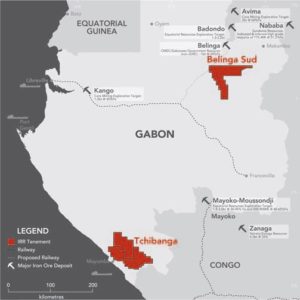 In short: Current weak iron ore prices are not deterring IronRidge Resources from pushing its Gabon-based projects forward. The long-term potential for the metal will drive prices and demand higher within the next three years, the company says.

“The DGR formula has delivered multiple successes since its establishment and listing on the ASX in 2003,” DGR Global executive director Nick Mather starts. “Today DGR represents the corporate incarnation of what I have done as a geologist, a deal junky and a resource opportunist. Our business model entails developing and growing a pipeline of early stage projects, injecting cash into them to de-risk and prove their mineral value and ultimately divesting of the projects through initial public offerings (IPOs) to gain maximum monetary value from them,” Mather continues. Today the company holds stakes in seven separate companies (all originally conceptualised and developed by DGR). Six of those companies are listed, which in addition to IronRidge Resources includes SolGold, AusTinMining, Navaho Gold, Armour Mining, Orbis Gold (currently been fully acquired by SEMAFO) and Archer Resources (unlisted). This ‘formulaic’ process has been developed over years and according to Mather, has never failed. It requires a philosophical and organised exploration approach, he points out. “Your starting point is looking for the right commodity (the most bankable ones such as iron ore, potash, phosphate, etc. which are suited to an urbanising world’s needs over the next 40 years).” The right geology and country are equally important. It is essential to work within countries and with governments which…

Load-haul contractors: Bargaining Council a must!