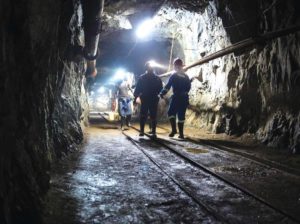 Metallon intends to ‘up’ its mining status from junior to mid-tier miner within the next four years through major growth plans – this will be a huge accomplishment considering current market conditions and its country of operation, Zimbabwe.

Zimbabwe is not considered a mining investment destination of choice, largely thanks to its indigenisation regulations as well as its power shortages.

With four high grade (average 3.7 g/t based on reserves as at December 2014) operational, underground gold mines in the country, Metallon has not only proven that mining success in the country is easily achieved, but is moving ahead with a four year strategy aimed at signifi cantly increasing its overall gold output while also exploring its mines at depth to grow its total resource base.

The short and long-term strategy

CEO Ken Mekani reveals the company’s growth plan in greater detail, outlining a short and long-term strategy. “How Mine is operating at full capacity; however our three other producing mines are not yet at full operational capacity. Part of our immediate and current focus is ensuring our mines reach their full design output capabilities. Not only will this lift our gold output quickly, but will drive our operating costs down, to about $800/oz once completed.”

With initiatives already underway to achieve this, Metallon should see a rise in total gold production quickly. The company anticipates producing between 130 000 and 150 000 oz for 2015, compared with 99 000 oz in 2014. Subsequently, this increased volume will ensure the company maintains its status – as producer of one third of Zimbabwe’s entire gold production.

The long-term strategy, Mekani continues, entails growing the company’s gold ounce profi le to the 500 000 oz pa mark by the end of 2019 – a major growth undertaking. And this is more than a ‘pipe dream’. Metallon has already identifi ed growth project prospects at each of its mines, which should see its objective easily achieved. This will also result in an increase in personnel – from about 3 500 at present to 4 000 when all fi ve mines are at full operating capacity – and an additional 3 000 jobs will be created for the expansion plan. The expansion plan should also see a further drop in operating costs to around $600/oz.

After completing the necessary feasibility studies for the identifi ed expansion projects, the CEO and his Zimbabwe-based team will prioritise their start-ups. “As our cash fl ow improves from each project, we will have the money to facilitate the next expansion project. Between 2015 and 2019, these projects will cost approximately US$297 million but are still subject to detailed feasibility studies.”

More than doubling its current output would be considered a massive undertaking by any mining expert, but this is not the end to Metallon’s…