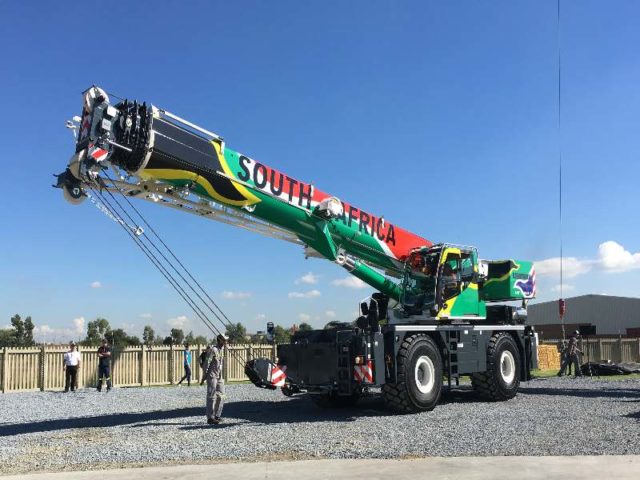 Liebherr-Africa, a local subsidiary of the global family-owned equipment manufacturer, The Liebherr Group, held its Customer Day 2018 at its head office in Springs, Gauteng. The event, which took place in April, coincided with the celebration of Liebherr-Africa’s 60th anniversary on the African continent. CHANTELLE KOTZE writes.

The Customer Day 2018 provided the opportunity for customers to network and engage with both local and international Liebherr executives and factory representatives on Liebherr’s wide range of equipment solutions.

Liebherr-Africa also used its Customer Day as an opportunity to showcase the capabilities of some of its earthmoving machinery during a live product demonstration and to allow guests to explore the Liebherr-Africa head office facility with a guided tour of the company’s 6 400 m2 factory, which holds over 37 000 line items.

Unveiled and launched into the African market at the Customer Day was the Liebherr T236 Mining Truck and the LRT 1090-2.1 Rough Terrain Mobile Crane. The Liebherr T236 mining truck, with a 100 t payload capacity, is designed to meet the most challenging operating environments, typically found in Africa.

Liebherr believes that the latest generation components and technology that combine to create the T236 not only lowers the cost per ton but also results in increased productivity, better efficiency, enhanced reliability and improved safety.

On the day of the T236 mining truck launch at the Liebherr-Africa Customer Day, the Company secured its first order for the this new truck, with the first T236 destined for an iron ore mine in the Northern Cape.

Having specifically been designed with safety in mind, the 90 t capacity LRT 1090-2.1 rough terrain mobile crane features an outrigger monitoring system as standard, while the VarioBase variable support base developed by Liebherr also comes standard on the LRT 1090-2.1 as another means of enhancing safety.

The mobile crane features a 47 m hydromechanical telescoping boom system with rope pull technology which enables the boom to be extended to the required length quickly and easily, providing a hook height of 66 m within a radius of 2.5 m.

“Over the past 60 years, Liebherr-Africa has grown into a fully-fledged Liebherr Group subsidiary employing 430 people with branches in Cape Town, Durban, Richards Bay, Kathu, Brits and Middelburg, as well as various agencies, depots and mine sites in other regions in South Africa and neighbouring countries,” said Mr Schmid.

As part of Liebherr-Africa’s growth strategy, the company has continuously invested in upgrading its facility in Gauteng to manage increased demand.

One of the upgrades has been the establishment of a component rebuild centre, which enables the remanufacture of cylinders, pumps, gearboxes and motors for all Liebherr equipment. Liebherr-Africa has also recently invested in a project at its Gauteng-based facility which will enable the company to remanufactured diesel engines in 2019.

At the event, Mr Schmid noted that Liebherr-Africa has grown and will continue to grow from strength to strength through continued customer support and the dedication of its employees. He thanked the company’s customers for their unwavering support throughout the years which he believes has been the foundation of Liebherr-Africa’s success.

Also speaking at the event, was Mrs. Sophie Albrecht – the Joint Director, together with her father Mr. Willie Liebherr, of the Mining and Mobile Crane product divisions within the Liebherr Group. Mrs. Albrecht, who is also the granddaughter of the Company’s founder, Mr. Hans Liebherr, emphasised the Company’s core values of independence, innovation, quality, trustworthiness and responsibility.

“These core values are not just a mantra but rather something vital that the entire company upholds in practice and which influences every aspect of the company’s corporate culture,” Mrs Albrecht said.