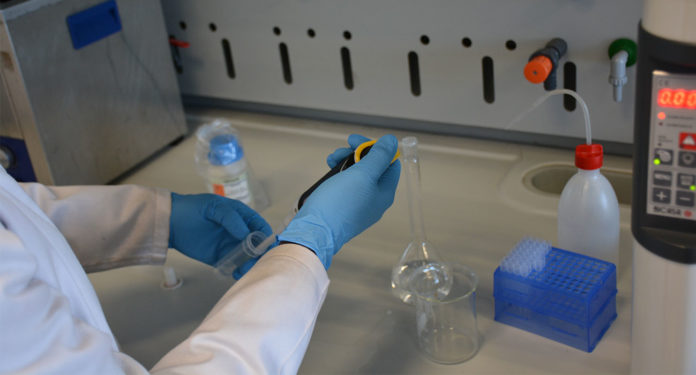 Mintek is 82 years old and moved to the current site over 40 years ago in 1975. It has begun a phased refurbishment and rejuvenation of its entire campus in Randburg, Johannesburg – starting with the refurbishment of its analytical services laboratory.

The old ADS laboratory, sporadically spread across seven floors of a building, has been strategically consolidated to occupy three floors – with a fourth floor to be utilised in future as the laboratory grows. Mintek president and CEO Abiel Mngomezulu explained that this modern facility would streamline workflows and create efficiencies within the division, enabling Mintek to continue offering world-class analytical services.

Also speaking at the launch of the ASD laboratory, Mintek general manager: Technology Alan McKenzie highlighted that the new facility, which cost R18 million (funded from within Mintek), is an investment in both its own future and that of the mining and minerals industry.

With a sample capacity of 12 000 samples per month, McKenzie believes that the lab would be able to begin making a return on investment at a sample breakeven level of 4 500 per month within the next five years.

“We took a strategic decision to refurbish the ASD laboratory during the current mining downturn, at a time when the workload is a bit lower. This will allow us to take advantage of improved market conditions during the mining upturn,” he notes.

The old laboratories were designed at a time when analysis was mainly undertaken using pipettes and burettes and classical wet chemical techniques, but technology has since evolved. “The previous laboratories were simply not designed for the current type of analytical chemistry,” McKenzie explains, adding that most analysis is now undertaken using instrumentation and computers.

According to him, chemical analysis and its results are “absolutely crucial” to the work that is done in a research organisation and also in the mining industry as it guides mining companies on how to improve efficiencies within their processing plants.

To facilitate the refurbishment, the floors on which the new ASD laboratory was established were completely gutted, leaving behind only the concrete floors and ceilings.

The new laboratory, under the management of Joe Baloyi, which has been fully operational since the end of July, has been designed and built in such a way as to enhance visibility through the use of natural light. The laboratory resultantly features large glass windows and panels that separate each of the laboratory sections, yet maintain visibility and cooperation throughout the sections.

To optimise workflows, Mintek has optimised the laboratory layout in such a way as to enable the moving of samples between laboratories easily and more efficiently – dramatically improving its work flow.

The laboratory also features positive air pressure to prevent dust ingress, as well as variable-speed fume extraction fans in the fume cabinets and sensor lighting to improve energy efficiency. The ASD laboratory comprises 56 staff members, 34 of whom are operational staff members. It features state-of-the-art equipment, some old and some new enabling the ASD to off er several world-class services including sample preparation, spectroscopy, fire assay and classic chemical analysis, besides others. MRA