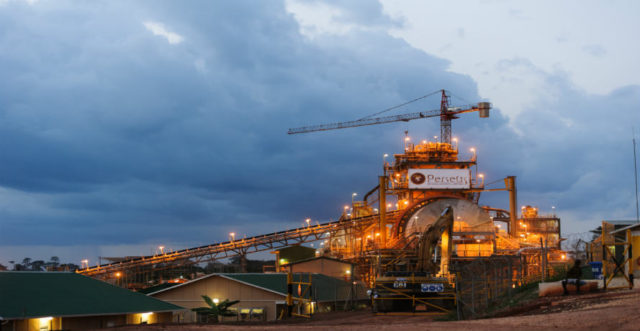 ASX/TSX-listed West African gold producer Perseus Mining is ‘steaming ahead’ to deliver on a major growth strategy which will see it transform from a single asset mining business to a multi-asset and multi-jurisdiction mid-tier company producing in the 500 000 ozpa range. “Our actions speak for themselves and are proving our growth plan to be credible and well advanced,” CEO JEFF QUARTERMAINE tells LAURA CORNISH.

Perseus Mining (Perseus) is quickly turning the corner and from early next year will own and operate two gold mines in two different countries – its six year old Edikan mine in Ghana and its new Sissingué mine in Côte d’Ivoire. It is furthermore underway with a feasibility study to bring a third gold mine – Yaouré, also in Côte d’Ivoire – on stream in 2020. “Delivery of this project pipeline, which is well underway, will transform the company and position us to achieve healthy cash margins which hopefully, will positively influence our share price,” Quartermaine states.

In March the company advised its shareholders of its formal acceptance of Committed Letters of Off er from Macquarie Bank to provide members of the Perseus group with a total of US$60 million of debt finance to fund its growth strategy. The financing includes a $40 million project debt facility that will be used to finance the completion of the development of Sissingué.

A second $20 million debt facility has been offered to Perseus’s Ghanaian subsidiary, Perseus Mining (Ghana), and will be used as required to provide general working capital over the next twelve months while production at the mine ramps up and Perseus’s corporate cash resources are applied to fund Sissingué as well as exploration and corporate expenses.

Documentation of both debt facilities is well advanced and first funds are expected to be available for draw-down by the end of the March 2017 quarter. Perseus has been advised on this financing by boutique debt advisors Noah’s Rule.

“Perseus is in a good place right now. We’ve come through some operational challenges at Edikan over the last six months, but the mine has been cash fl ow positive since December 2016 and we are back on track and producing according to our internal forecasts. Construction activity at Sissingué is progressing according to plan to deliver first gold early next year and we are halfway through a fairly major drilling campaign at Yaouré which has already delivered some interesting results. We remain on track to deliver the results of a feasibility study in the September quarter of this year.”

Should activities continue according to plan, Perseus will be operating all three of its mines in 2020 and be ramping up production at Yaouré to achieve its 500 000 ozpa gold production target the year after.

Discussing the operating challenges at Edikan, Quartermaine notes how the company has moved from mining open pits on the western side (large, easy-tomine granitic ore bodies) of its tenements to open pits on the eastern side where the geology is materially different. The eastern pits involve three styles of mineralisation – some granite, some sheer hosted gold and some sediments. “Because the eastern side is more complex, using the resource modelling techniques that generated very reliable results in the west gave us incorrect forecasts and we were constantly falling short on the grade. We have now however re-estimated the resource models for the mine using more appropriate techniques and on the back of that re -estimated the reserves as well.”

And while the updated resource has slightly higher tons, a lower gold grade and more contained gold ounces, the reserves remain fairly unchanged. “We’ll produce similar amounts of gold to what we have been predicting.”

From mid-year moving forwards, Perseus has determined that Edikan will average 240 000 ozpa at $875/oz (all-in-site-costs (AISC)) for the next five years, after which production will ramp down slightly as its lifespan approaches its end in the last year and a half and remaining stockpiles are processed.

“At this production rate, if we average a gold price of about $1 200/oz, we will generate about $403 million in after-tax cash fl ow. This equates to A$0.52 per share, higher than where we are trading currently at about A$0.31 per share – and this does not take in account our new mines and their contribution to the company.” +

“Our experience in Cote d’Ivoire has to date, been first class. The government agencies under the leadership of Monsieur Jean Claude Brou, the Minister for Industry and Mines in particular, has been pro-active, helpful and very constructive to deal with. I have worked in a number of developing countries in Africa and in Asia/Pacific and the experience that I have had in this country has been substantially better than any other prior experience in terms of government interaction,” says Quartermaine.

Quartermaine Perseus recently invested in upgrading its process plant 33 Sissingué open pit Quartermaine admits that Edikan is a low grade (1.1 g/t) operation which needs to operate efficiently all of the time in order to deliver returns. Having spent US$20 million on upgrading the process plant and securing reliable power with a new diesel power plant, the mine is now delivering exactly that. “We will focus intensively on producing according to plan for the next few quarters and hopefully the market will come to realise they’ve overlooked Perseus as a viable company, in which case we should see a rerating of our share price.”

On the upside, there is potential to extend Edikan’s lifespan. Perseus has evaluated exploration data that’s been obtained on its Ghana tenements over the last 10 years and has identified 50 potential exploration targets. “We will drill the top five in the near future and are optimistic that we will find additional gold resources from the drill targets.”

Paving the way for production start-up at Sissingué

Construction at the US$100 million Sissingué project in Côte d’Ivoire, which started in July 2016, is progressing well and the project is on track to produce first gold in February 2018. As of 10 March 2017, Sissingué’s forecast cost to complete was approximately $64 million (including full contingency) and this will be funded by a combination of Perseus’s internal cash resources and the project loan provided by Macquarie.

While a revised feasibility study is due out shortly, it is not expected to change materially from the original study which indicates the mine will produce around 75 000 ozpa at an AISC of $632/oz and just over 2 g/t for about five years – although some interesting targets have been identified which could generate additional satellite deposits.

Most of the civil works have been completed along with an air strip, tailings dam and camp site. Foundations for the plant have also been completed. Engineering contractor Lycopodium has finished the designs for the plant and already procured all long lead items. All the steel work is currently being fabricated and is due to arrive on site from May.

The mine will comprise a northern and southern pit as well as a recently defined resource called Bélé which is located about 40 km from Sissingué. “We will truck Bélé’s material back to Sissingué for processing and will consequently extend the lifespan of the project by about a year,” Quartermaine notes.

“Although a small operation, it will generate very healthy return on the funds employed – and this alone is a good reason to develop this project. However, it also provides a second cash flow stream very early on in 2018 and de-risks the company from being leveraged to the fortunes of one operation. It also demonstrates to the local communities and to government that we are a reliable partner that should continue to be welcome in the country because we deliver on our promises. This stands us in good stead for building the Yaouré project because it demonstrates our credentials, shows that we are trustworthy and provides stakeholder confidence.”

The Yaouré feasibility study is advancing and includes a 42 000 m drilling programme, now about halfway complete, and is aimed at improving the level of confi dence on the resource. “We are on track to deliver the results of the study (being conducted by RungePincockMinarco) in the September quarter of this year and thus far we are pleased with the results we are getting,” Quartermaine highlights.

He does note that the project Perseus will most likely be proposing will be slightly smaller (3.5 – 4 Mtpa ROM) than its previous owners Amara who had proposed a 4.5 Mtpa project. This smaller project will be based on a higher grade mill feed, will be a less capital intensive project, Construction at the Sissingué project is progressing well and the project is on track to produce first gold in February 2018 and will produce in the range of 150 000 to 200 000 ozpa at just over 2 g/t. “Our focus is not scale, but earnings generated – delivering projects that are robust and generate healthy cash flows.”

Perseus will also still need to negotiate a mining convention and get funding in place but the plan for now is to start full scale construction towards the middle of 2018 (some early works may start sooner than this) after which it will take about 18 months to build.

As it is in the south of the country not far from the capital city, the CEO reveals that the project’s location is “ideal”. Not only will it not materially impact on or disturb any local communities, it will also enjoy the benefits of necessary infrastructure. It is situated just 20 km from a six-lane concrete highway and about 5 km from a large reservoir – including a hydro-electric dam. “We are also just 5 km from Yamoussoukro, the capital of Côte d’Ivoire, which is home to a school of mines that provides access to skilled professionals.”

“For now we are working to ensure we develop and maintain a healthy relationship with the nearby community to ensure they have realistic expectations of the benefits generated from the establishment of a new mine,” Quartermaine concludes.