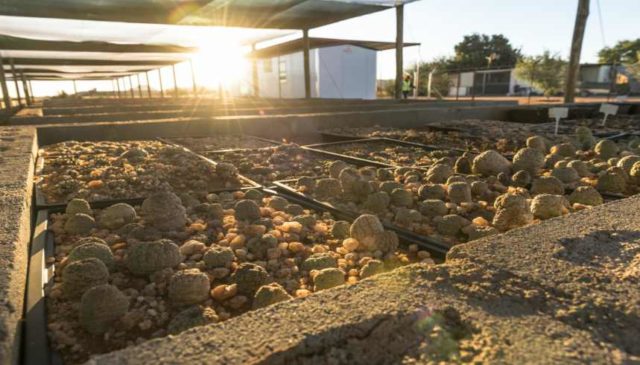 DESHNEE NAIDOO, CEO of Vedanta Zinc International (VZI), is passionate about environmental responsibility and sustainability – and believes it should form part of the foundation of any mining business. The highly successful closure and rehabilitation programme at Lisheen mine in Ireland clearly demonstrates this. Now, the company’s large-scale Gamsberg zinc project in the Northern Cape is being developed on the same responsibility premise and can already be acknowledged for the work it is implementing to protect the environment, writes LAURA CORNISH.

“Sound environmental practices should be a fundamental pillar of any mining business’s approach, from exploration to closure, and should be approached in a holistic way – taking fauna and flora as well as waste, air and water quality into account. Understanding and respecting how people live, work and spend their leisure time is of equal importance, as is their safety, health and well-being,” Naidoo starts.

“As a citizen of our beautiful country, and as a mother of three daughters, I feel a very strong and personal commitment to the need for responsible stewardship. And this, for me, is not only about the natural environment. As important, if not more important, is the need to create a physical and social environment in which people – employees and communities – can thrive.”

Naidoo’s passion for the environment and the implementation of sustainable measures is a natural extension from the top, where VZI’s chairman Anil Agarwal is also leading by example. “He believes that the natural resources sector can truly accelerate a nation’s development agenda – that the sector can boost manufacturing and build infrastructure in remote geographies, generate large-scale employment and significant revenue for nations globally. His view – and one he instills throughout the business – is that by working together and growing together, we can achieve co-development of companies and countries, of the economy and ecology, of communities and private enterprises, and of all our stakeholders.”

As such, Vedanta, VZI and its entire workforce are driven by four guiding principles/pillars that inform planning and implementation of all projects and operations:

• Commitment to responsible stewardship, based on standards and guidelines of entities such the International Finance Corporation (IFC), the International Council on Mining and Metals (ICMM) and the Organisation for Economic Co-operation and Development (OECD)
• Building strong relationships – with its employees, its host communities and broader society. • Adding and sharing value to maintain its licence to operate. Here, the chairman leads by example, with 70% of the company’s profits being invested in social programmes.
• Strategic communication, specifically reporting transparently and consistently.

Vedanta’s Sustainable Development Framework, first implemented in 2012, continues to evolve to remain in step with emerging global standards, varying local contexts and differing and developing stakeholder expectations. To ensure compliance with the Framework, Vedanta has an internal risk management tool called the Vedanta Sustainability Assurance Programme (or VSAP), and this is a critical metric against which the businesses and their leadership are held to account.

The closure of Vedanta’s Lisheen zinc mine in Ireland in December 2015 is a fine example of Naidoo and the company’s dedication to delivering sustainability beyond mine life. After 17 years of operation, all activity at the mine was terminated. “For an industry that is typically very excited at the beginning of the mining process, it was very rewarding to be part of the end – or in fact, a new beginning – for the land and region that has yielded mineral wealth.”

Long before Lisheen was approved and permitted, its developers prepared a comprehensive plan of the rehabilitation work that would follow the mine’s closure. It was a plan that was refined progressively over the years to ensure the smooth restoration of the mine to its pristine, pre mining state, as well as to render the site available for post-mining use and create opportunities for environmentally sound use of any remaining mine infrastructure. To do this, a task force was set up, comprising current and former employees as well as the Industrial Development Authority, local and national government representatives, among others.

The mine’s useable mining equipment (from underground and the surface) was recycled for use by mines elsewhere (rather than being sold as scrap or left to rust). Following the removal of all material that could be harmful to groundwater, the re-watering of the mine commenced and underground workings were allowed to flood in a controlled manner. Dissolved minerals in the mine water have precipitated out of solution and settled on the floor of the sealed workings, ensuring that any water that might flow into the surrounding strata is clean. Wells that were dewatered by mining have filled with potable water that can be used for agricultural or domestic purposes. Backfill has been placed in worked-out areas, providing bulk that inhibits the collapse of underground workings, thereby ensuring continued stability of the land lying over the mine’s workings.

Before the mine was established, the site was used by pastoralists for running sheep and cattle, and rehabilitation has restored the land to allow for its previous use. The entire surface of the mine’s residue dump has been covered with a geotextile material on top of which a 700 mm layer of limestone and a 300 m layer of soil has been laid. An engineered wetland has been incorporated into the design to ensure that no deleterious water run-off occurs.

The soil cover has been planted with grass, which is already starting to provide safe and healthy grazing. The 1 000 mm limestone and soil cover ensures that the surface grass does not penetrate to the underlying tailings residues. This surface is also ideal for the establishment of a photovoltaic farm as well as for the cultivation of grasses that can be used as biomass for heating or electricity generation.

The mine’s 12 surface shafts were filled with boulders topped by concrete plugs reinforced with steel rebar. Closing the mine’s main decline portal was more complicated but was achieved with the construction of a barrier 20 m below the surface, topped by rocks and boulders over a horizontal distance of 130 m to create a geotechnically competent plug.

In March 2017 Commercial Mushroom Producers (CMP) announced it would establish a mushroom growing facility, with potential for 40 to 60 jobs at the outset, on the Lisheen site. The local Tipperary County Council received €100 000 to conduct a feasibility study for the bio-economy pilot plant at Lisheen, which is at the hub of a 50 km bio-economy model demonstrator region – one of six in Europe.

“Vedanta undeniably developed a best practice mine closure plan that was not only about physical closure and permitting, but also pursuing a vision to find a replacement industry for the site.”

Gamsberg starts on the right foot

Developing the mine presented challenges from the start – and VZI needed to ensure that a region renowned for its floral diversity was not damaged but established in such a way as to restore it once the mine closes. The area, known as the Succulent Karoo Biome, is home to at least 6 000 species of plants that have evolved over millennia to survive the desert’s aridity, many of them rare. The Bushmanland Centre of Endemism is smaller but is also a site where 397 unique succulents exist, among them 16 that are endemic and four that are restricted to a small space.

VZI’s environmental specialists worked closely with a wide range of specialists to design and implement a process to ensure the necessary protection, preservation and ultimate restoration.

It enlisted advice from a range of local and international environmental organisations.

After thoroughly evaluating the area’s plants, they were relocated (including their seeds) to specially designed nurseries and research institutions. 80 000 plants and 360 000 seeds were collected and moved to the specialised facilities at the Karoo Desert National Botanical Garden. They will be replanted with the endemic species that were removed from the site, saved and protected. The area’s fauna presented a different challenge. After determining that animals should not move into working areas where they might be threatened, sensitive areas were fenced off.

The waste dump and tailings storage facility have been designed to prevent unnecessary atmospheric pollution, and to ensure that run-off is prevented. “The Gamsberg project has been a wonderful example of how business partners can and should work together and can learn from one another,” Naidoo highlights.

The mining sector needs to be cognisant of three important factors when considering the environment, Naidoo concludes. “That responsibility is not the same as compliance. People are part of the environment, and future generations – especially our children – will judge us not on the wealth we create, but the legacy we leave behind.”