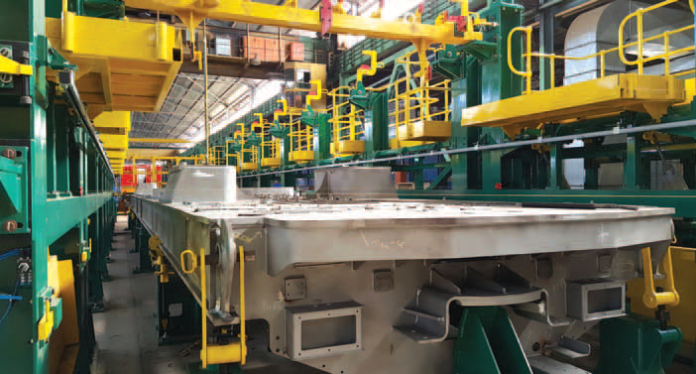 Africa’s oldest heavy engineering specialist DCD is looking to re-establish its traditional presence and position in South Africa (and Africa) under the leadership of former WorleyParsons head Digby Clover who was appointed the company’s CEO in January this year. “With effective engagement between ourselves, government and industry, this business can deliver on the potential it has built up over many decades,” he tells Laura Cornish.

“I was attracted and drawn to the business because it has an amazing suite of assets and heavy-duty, large-scale manufacturing capacities and capabilities,” says Glover. “The company has however been impacted by tough market conditions and suppressed industry sectors – including mining. “Despite this, I believe that with the right support and direction from our shareholders and effective engagement with strategic stakeholders, DCD can re-emerge as a valuable business and contribute towards economic growth in South Africa and Africa as well.”

Although DCD has undergone various restructuring exercises, a delisting and two management buy-outs over its history (its oldest division has been in existence for over 100 years), the essence of its business – steel fabrication services for the mining, energy, petrochemical, paper and pulp, sugar and cement industries, ship repair, large structures, mining equipment, defence vehicles, rail related products and rolling stock manufacture – has always remained solid.

“Our heavy engineering capabilities have grown during strong economic periods thanks to industrial and infrastructure development. And despite the challenges associated with market and economic downturns, we still employ about 2 500 people and through key personnel have retained our expertise and various specialised business units around South Africa.”

As a completely South Africa-based company with 44.8% black ownership, DCD is fully equipped to compete internationally for any heavy engineering project, Glover highlights. “It is important however to have full support from government, who are primarily responsible for stimulating in-country growth through new projects by partnering with experienced local manufacturers and suppliers such as ourselves which already have the resources, skills and facilities to deliver – as opposed to building new capacity or engaging with international suppliers. We want to interact with government and take a proactive stance on encouraging departments to work with local suppliers to ensure our skills off ering and expertise continues to fl ourish – for DCD’s benefi t and South Africa’s as well. ”

“In essence, this is the cornerstone upon which our future will be built. My focus as CEO is on further entrenching DCD as a preferred partner to governments and strengthening our position as the market leader in heavy engineering in Africa by engaging with the private sector as well – while ensuring we utilise our capacity effectively and establish optimal cooperation and connectivity between our various divisions to leverage business opportunities across sectors. I will not tolerate inefficiencies in any area of business moving forward,” Glover outlines.

DCD’s rail business cluster is currently one of the strongest performers within the larger Group, thanks to the ramp-up of an order for its Rolling Stock division to supply 240 locomotive car-bodies to Bombardier – a global player in the rail and airspace transportation sectors. “The order is however local,” DCD Rolling Stock’s Gary Steinmetz confirms. “Bombardier was awarded the contract to supply 240 electric locomotives (part of 1 064 in total) for Transnet Freight Rail’s general freight business.”

DCD Rolling Stock has spent the last few months gearing up to fabricate and manufacture three locomotive bodies every week for the contract which is already underway and expected to be completed towards the end of 2018.

“The order showcases our leading position in this niche sector which we established and maintained over decades – since locomotives were first required in South Africa. We have significant intellectual property on our locomotive designs which we continue to improve and develop,” says Gary. The company in fact recently completed the design, fabrication, manufacture and assembly of fabricated bogies for diesel electric locomotives, which consequently positions it alongside major international players.

DCD Rolling Stock also has its own range of freight wagons, mining and industrial locomotives with capacities of up to 65 t, which are ideal for underground and surface operations.

“The mining sector remains a key strategic industry for DCD and we intend to participate in any mining-related tenders for any project we can contribute towards, in South Africa and well beyond that, on the mine and between mine and port. For the immediate future we will focus on major mining players who can offer larger contracts (as opposed to small, ad hoc contracts),” Glover notes.

The broader group structure and offering

DCD’s Heavy Engineering works facilities in Vereeniging and Vanderbijlpark are largely focused on the mining and energy-related sectors and remain to this day some of the largest fabrication and assembly resources in the world – with a 280 mm rolling plate capacity. It is also one of only two companies (globally) which can fabricate ball and SAG mills, which it does in addition to any heavy duty mining equipment such as crusher shells, dragline parts, etc.

Vereeniging also houses the highly automated DCD Ringrollers business, today a leading supplier of forged railway tyres for mainline railway, metro trains and trams globally. Other products under this business include flanges, rings for bearings, gears and specialist items. Transnet remains one of its largest customers although it is rapidly growing its footprint in the United State, Australia and Europe as well.