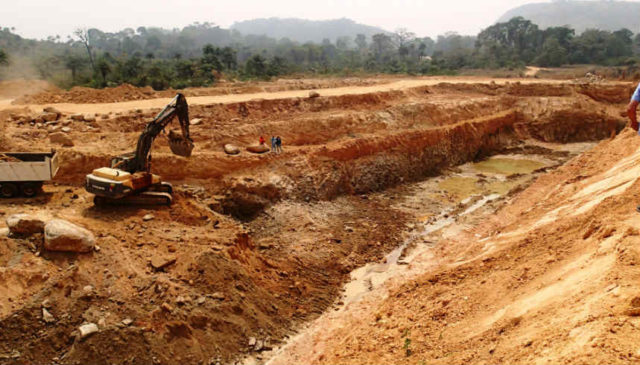 In August this year AIM-listed Stellar Diamonds (Stellar) announced a transformational transaction which will see the company’s primary kimberlite asset Tongo merge with privately-owned Octea Holding’s contiguous Tonguma asset in Sierra Leone. Together, the two projects will represent the second largest diamond mine in the country, once in production, which looks to deliver around 200 000 carats per annum, CEO Karl Smithson tells Laura Cornish.

Having been in discussion with Octea Holdings for well over a year, the transaction had advanced suffi ciently to break the news to the market. “With the largerscale Tonguma located next door (literally) to Tongo along the same kimberlite system, we recognised the benefi ts of scale and economy in developing a single, larger mine run by one company,” Smithson starts.

Consequently, Stellar (whose shares are suspended from trading on AIM until the transaction is complete) approached Octea to merge their two local subsidiary companies/owners of the two assets in a reverse takeover. Financially, the deal is “incredibly attractive. Stellar does not pay for the transaction as it will fund all costs to bring the larger project into production. And while Tongo required a US$25 million start-up as a standalone operation to yield production of around 70 000 carats per year, we only require another $13 million to deliver the larger, combined $31.8 million project that will yield three times that production. It just makes compelling fi nancial sense,” Smithson highlights.

The transaction, if completed, would result in Stellar having a 75% economic interest in the project following, inter alia, preferential repayment of the initial investment made by Stellar and payment of certain revenue royalty payments to Octea. The CEO also foresees no stumbling blocks in completing the transaction and notes that the deal is more than halfway complete. Having recently issued a pre-economic assessment (PEA) plan for the combined project, only a new listing document, subsequent shareholder approval and thereafter funding is required to fi nalise the deal. Smithson hopes to conclude these outstanding requirements before Christmas.

Smithson notes that Tongo and Tonguma cover the entire Tongo diamondiferous area – one of two known prolific diamond areas in Sierra Leone. (The second is Koidu.)

The PEA, released in October, demonstrates a fi nancially robust and high margin 21 year life of mine over an initial resource of 4.5 million carats (Tongo – 1 million carats and Tonguma – 3.5 million carats), of which 4 million carats is classifi ed as recoverable. At full-scale production this equates to 200 000 carats per annum, expected in the fourth year, at sums of around $200/carat. “On its own, Tongo would only have produced between 70 000 and 80 000 carats a year, so again, the significant increase in scale makes this transaction extremely valuable.”

The PEA also recognises considerable upside potential – up to 8 million carats – from additional high-grade kimberlite dykes on the properties which are not yet categorised into resource.

“The combined diamond grades and quality are also very good and we are looking at recovering an average 2.5 carats per ton, which is signifi cantly higher than the average kimberlite mine in South Africa.”

And while Tonguma already has its mining licence in place, Tongo’s application is with government at present and has been since January 2016. “If all outstanding timelines and the funding happen according to plan, we should be ready for construction start-up early next year which will see us recover diamonds before the end of 2017.” Because the transaction includes the acquisition of Octea’s redundant 50 tph production plant at Koidu mine, only a small amount of upgrade work is required to bring Stellar’s processing requirements online.

Independent industry consultants Paradigm Project Management (PPM) and SRK Consulting (SRK) in South Africa prepared the PEA on the basis of an underground mining scenario only. The consultants utilised independent resource statements prepared for Stellar by CAE Mining, in respect of Tongo Dyke-1, and Mineral Services Canada, in respect of Tonguma.

Only three kimberlites dykes of a total of 11 on the properties (four at Tongo and seven at Tonguma) have been categorised as resource to date, being Tongo Dyke-1, Kundu and Lando for a total of 2.2 Mt and 4.5 million carats at a +1.18 mm cut off .

A further four dykes have been drilled out at Tonguma, and along with certain sections of Lando and Kundu, are classifi ed by Mineral Services Canada as ‘exploration target’ off ering a mid-range total of 5.6 Mt and potential for a further 7.96 million carats for the project. Although it can’t be guaranteed that further exploration will result in this exploration target becoming a mineral resource, Stellar directors consider that this target demonstrates significant upside to the overall resource base of the project and it is the intention to bring the ‘exploration target’ into the JORC resource category in due course through further drilling and sampling.

In preparing the mine plan and fi nancial model for the PEA, the consultants used the total diamond resource of 5 million carats across all three dykes and also applied a recovery factor which could be expected during the mining and processing of the kimberlite ore.

This resulted in an estimate of 3.96 million carats of recoverable resource during the life of mine from the total project resource of 4.5 million carats. Diamond values range from $209/carat for Kundu and Lando to $310/carat for Tongo Dyke-1.

Having evaluated a variety of diff erent scenarios, the Stellar team has determined that an underground mining operation accessed via declines is the most effi cient method of operation and also the quickest to start producing.

According to the PEA, the underground mine plan is currently confi gured as a series of declines from surface at Kundu, Lando and Tongo. The declines will be 4 m x 4 m in cross section and will be developed at an angle of 8°.

Mining levels will be interspaced at 35 m depth with the fi rst levels being developed at 40 m below surface. Based on the current resource models, Tongo will have a planned 11 levels, Lando 10 levels and Kundu 5 levels during the 21 year life of mine. The depth will range between 200 and 300 m and the ore bodies will be accessed by 2 m x 2 m drives and cross-cuts into stopes that are mined by traditional overhand shrinkage stoping mining methods, with the ore being drawn from access points and transported on underground locos and tipped into bins on an ore pass system.

At full production Stellar will employ approximately 1 000 local Sierra Leone residents and will invest in training and upskilling as well. “This is a huge opportunity for the country and its local inhabitants, especially when considering the downstream benefi ts,” Smithson concludes. MRA