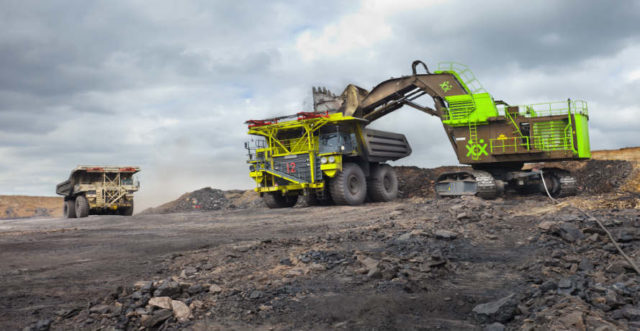 2016 was a turning point for black-empowered diversified mining company Exxaro Resources. Not only was it the year in which the company celebrated its 10th anniversary since its creation in November 2006, but also the year that marked the coming to an end of the company’s black economic-empowerment (BEE)

ownership structure through the Mainstreet 333 consortium.

This has necessitated the unwinding of the existing ownership structure and the subsequent formation of a replacement BEE structure to enable the company to continue along its path of empowerment and transformation facilitation. This new BEE structure, in addition to being a significant part of Exxaro’s strategy, will also provide the company with a competitive advantage. Exxaro CEO Mxolisi Mogojo believes that empowerment through broad-based black ownership is a strategic imperative, not only for the company but for South Africa too.

Within the context of the transformation of economic ownership in the country, Mogojo, on behalf of Exxaro, aims to develop and lead the discourse on empowerment and transformation as well as contribute towards creating a better life for all citizens in South Africa.

Speaking at the 2017 Investing in African Mining Indaba, Mogojo said that it was a goal of Exxaro to create sustainable black ownership, which reinforces the foundation of transformation, whilst adhering to the spirit and ambition of the Mining Charter and BEE Codes of Good Practice.

“Investing in our country and the continent at large and mining in particular for long-term sustainability is something that is very close to my heart.” Drawing attention to the inequality that exists in South Africa, Mogojo noted that the South African economy is one of the most unequal of the world’s nations, registering close to 0.7 on the Gini coefficient – a statistical scale where 0 represents all people having the same income and 1 indicates maximum inequality.

“South Africa’s consistently high Gini coefficient presents several risks for the country, in particular in our mining communities, which are already hotbeds for social and political unrest,” he points out, noting the need to achieve sustainable black ownership as a means to ensure on-going business development, economic growth and employment creation, as well as social development for a better life for all in South Africa.

In doing so, Mogojo maintains that it is only through honest reflection and debate on the past and the way in which BEE was shaped during the ‘first wave of empowerment’ that we may hope to create new sustainable BEE structures that will benefit the people of our country well into the future.

“It is for this reason that the trajectory of black ownership must move towards less encumbered black equity shareholding at a significant – even if not majority – ownership level,” he notes.

Mogojo notes the imperative in finding the right balance between the size and level of black ownership with appropriate funding structures.

Less rigid structures, that limit the cost and dilution to minority shareholders, will ensure that the business is more sustainable and able to invest for future expansion.

These more flexible and less geared structures are being designed to better enable black shareholders to maximise their returns, and end up with a positive net equity position after equity facilitation and debt has been paid off.

Mogojo maintains that by preserving net asset value, black investors will be better positioned to facilitate more empowerment and even market-related transactions as well as reinvest in their businesses.

“Their companies will have larger capital reserves to invest in new projects for future growth. This means that more transactions will be sustainable in the long term, all the while also adhering to the national objectives of empowerment and transformation of the economy.”

No one size fits all quota

Mogojo is calling for the conversation to move from rigid, reductive and restrictive ideas about fixed black equity in white companies, to being more reflective of the size of the company.

Progress, he believes, should be made over time in the following key areas:

• Increasing the enterprise or net asset value of black entities in the economy;
• Increasing the rate of corporatisation of BEE shareholding, converting black equity in traditionally white companies into independent black managed and controlled companies that are able to drive capital formation;
• Better aligning the overall levels of black wealth with the demographics of the country.

At the core of these issues are conversations that are deeply emotional and political on matters that are technically, economically and financially complex. Difficult trade-off s are needed to overcome funding constraints. Black business people and entrepreneurs who have set capital aside need to be encouraged to invest and reinvest in empowerment structures and the rest of the economy. They should, however, not be shackled or disadvantaged relative to other shareholders.

Ultimately, they should be encouraged to build and be the major empowerment champions of this nation, says Mogojo

Exxaro will introduce a new black economic empowerment (BEE) scheme once the unwinding of its existing
BEE agreement has been completed.

All the direct and indirect shareholders of Mainstreet 333 will be invited to participate in the new BEE transaction by reinvesting their shares received from the unwinding process. This is with the exception of the Industrial Development Corporation (IDC), which has separately agreed to reinvest some of its Exxaro shares in the BEE vehicle.

How to address empowerment challenges

Mogojo notes the need for better cooperation between government, business and the whole financial services and investment sector to collaborate towards an honest intent of true empowerment which will achieve the ambitions he outlined above.

“As a country, we must relook at policy interventions to ensure that these are not too restrictive for entrepreneurs and enterprising entities, thus stifling job creation; that they do not unintentionally create a permanent underclass or that they cripple our society and encourage corruption and fronting.

“We must agree on the purpose of economic transformation: Is it to create real wealth and value and for whom? What is clear is that the debate cannot just be about regulatory compliance.”

There is also an urgent need for clarity on the goals of empowerment policy and legislation, says Mogojo, particularly regarding the building of black wealth. “We are confusing issues around the level of black control and ownership of the economy as a transformation imperative.”

Policy must be enabling, rather than prescriptive, by acknowledging the milestone achievements in transforming our economy and addressing the remaining obstacles for further progress. The lessons of the past 24 years have shown that while we must remain ambitious in our transformation efforts for our economy, we must also be realistic, pragmatic and focus on achievable solutions.

Moreover, Mogojo iterates the need for selfless, bold and visionary leadership who will maturely grapple with the difficulties of transformation but also provide the required direction on wealth creation and efficient policy implementation for the creation of black industrialists and encourage broad-based empowerment.

“It’s not a case of either one or the other. This is a balancing act of short-term needs and long term aspirations, shared risks and benefits, and critically also hard work and sacrifice. We must ensure that more black shareholders end up with high levels of net equity so that they are able to reinvest and create even more value for more people.

“BEE is a national policy and fundamental tenant of transformation – it is right that citizens should have a say on how companies are embracing and promoting it. But it is incumbent on all of us to ensure that those conversations and those opinions should be informed, evidence based and underlined by economic and financial reality, balanced with political aspiration and societal ambition.”
While there is an imperative to discuss the evolution of BEE, Mogojo is of the opinion that the conversation needs to be less emotional and reactive and more measured, informed and constructive. “We must find new solutions to achieve sustainable black ownership by creating new paths into the next phase of economic transformation and sustainable ownership of the country’s economy.”