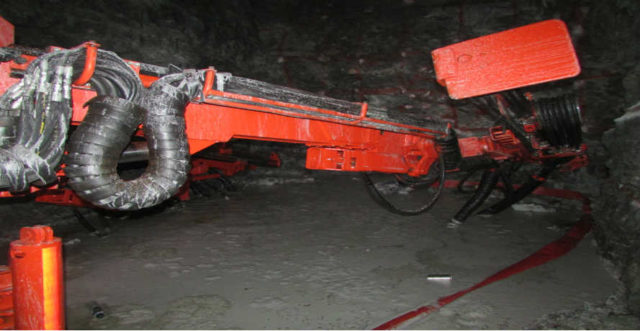 Following a major fall of ground (FOG) incident that took place in April 2015 at Modder East Operations on the East Rand, the management’s immediate and successful response to the resultant substantial water ingress into the underground mine workings highlighted the company’s commitment to its key philosophy: “Nothing is so important that it cannot be done safely”. Chantelle Kotze writes.

FOG incidents are accidents that relate to the unexpected movement of rock mass and the uncontrolled release of debris and rock, as a result of gravity and/or pressure, strain burst or rock burst.

According to the Department of Mineral Resources’ 2015 health and safety statistics, FOG incidents remain the primary cause of injury and fatality in the South African mining industry, with 22 FOG fatalities in 2015, out of a total 77 fatalities. As a result of this, mines have implemented and adopted leading practices to reduce health and safety risks such as the use of mine support systems, including nets and bolts, to help prevent FOG incidents. The result of these practices has led to a 12% reduction in FOG fatalities from 25 in 2014 to the 22 in 2015.

Modder East Operations, owned by New Kleinfontein Goldmine, a subsidiary of privately-owned gold miner Gold One Group, is a shallow underground mine situated about 45 km east of Johannesburg in Springs – an area that promotes water ingress and transportation, with faults and dykes approximately 35 m deep that serve as preferential water fl ow paths (aquifers).

Speaking at the MineSAFE 2016 conference, hosted by the Southern African Institute of Mining and Metallurgy (SAIMM) in September, New Kleinfontein Goldmine general manager Isaac Tshabalala noted that because of the geology, the mine is prone to ambient excess dolomitic water ingress, with the mine having to pump 16 million litres per day of water.

“Following the FOG incident, approximately 7 million litres per day of additional fissure water was subsequently created, thus requiring urgent strategic intervention to save the mine from possible flooding,” he noted.

Tshabalala notes that the sudden major water influx tested the mine’s level of preparedness to deal with the imminent danger of the situation while also placing the mine at great risk of flooding and consequential closure.

The result of closure would be the dire consequences of job losses for the 3 000 employees and contractors, and the loss of return on investment for the shareholders.

To avoid this at all costs managements’ immediate response was to establish an emergency control room for continuous around-the-clock monitoring, with accurate and detailed reporting every 24 hours. Daily issue-based risk assessment of the water situation and monitoring of the FOG area for further falls was also undertaken.

The mine immediately discontinued the supply of 3 million litres per day of service/drilling water to underground and then began to channel the water to nonessential excavations currently flooding the decline, and maintained continuous pumping operations, using a 90 kW submersible pump.

Once safe to access the mine, operations were focused on arresting and containing the FOG area to the West, North, and East, using active permanent support, including pre-stressed mine poles with jackpots and 313 prestressed five-block Apollo matpacks, all installed from a safe area towards the fall.

As a longterm solution, the mine management took the decision to drill a 167 mm diameter hole from surface directly into the FOG, to place backfill in the immediate vicinity of the fall and to commence with commissioning the third dirty water pipeline to surface to deal with the excess water.

A second hole was drilled from surface after blockages started to occur with the backfill at the FOG area, with the primary purpose of establishing a connection with the water source, for sealing purposes.

Sealing from the underground workings also commenced, whereby relief holes were drilled into the water source, intersecting a total of 133 971 litres/hr of water with eight strategically planned holes at about 30 m to 50 m in the hanging wall.

All the holes were sealed, thus reducing the influx water to manageable levels. The total costs associated with this fall amounted to R9.81 million as at end May 2016.

To deal with the extra water ingress into the mine, the mine constructed a new underground pumping station and settlers. “Now that this has been commissioned, we are in a better position to handle the risk of flooding, while also ensuring that the mine can sustain pumping 16 million litres per day of water and more over the coming nine years of mine life,” says Tshabalala.

Modder East management, through its visionary leadership, wealth of experience, reasonable understanding of the ambient underground water situation, and sound partnership with its contractors and suppliers, coupled with the common objective among all employees of saving the mine, safely managed to bring the FOG water influx under control.

Load-haul contractors: Bargaining Council a must!