Statement from National Union of Mineworkers regarding AngloGold Ashanti:

This follows negotiations of the collective agreement related to the sale of the Westvaal Hospital owned by the company to another company.

NUM is far the majority union at West Vaal.

During the negotiations, the management refused to insert a clause in the agreement allowing the recognition of the NUM post the sale.

Management also insisted on taking away the enhanced severance package promised to workers.

There is also no certainty regarding Pension/Provident fund.

They recently called workers for a briefing at which workers walked out in anger and frustration and started singing revolutionary songs.

"There is retrenchment going on at West Vaal hospital. The hospital has close to 250 workers. It is only 83 workers who are going to be employed by a new company that has allegedly bought the hospital.

This new company is very much arrogant. The new company and AngloGold Ashanti are showing bad signs of union bashing. They have already suspended three NUM West Vaal Branch leaders for questioning the sale of the hospital.

"It is about time that AngloGold Ashanti must be put on the spotlight as a brutal and worse employer of the 2017/2018 period," said Joseph Montisetse, NUM President. 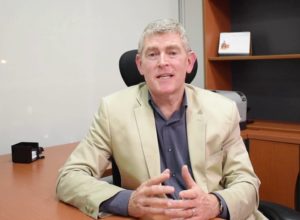